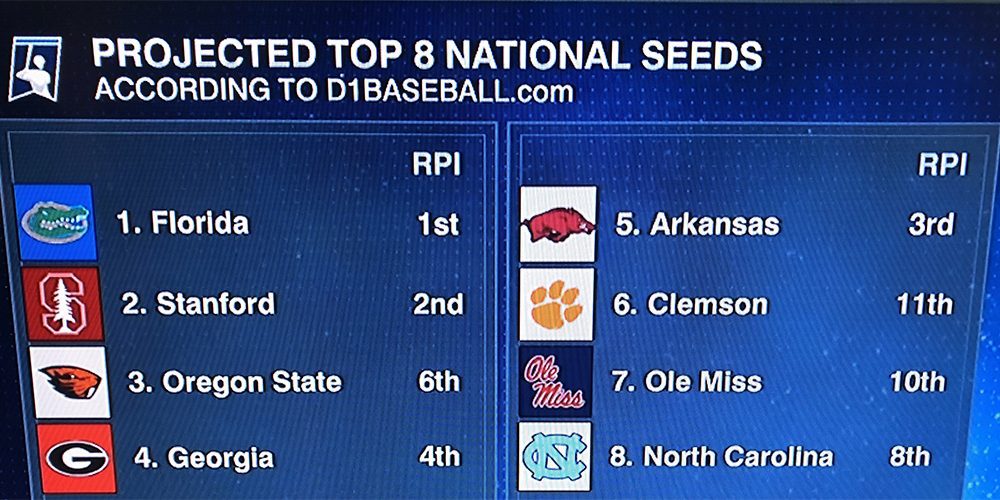 The skinny: Some had concerns about the Gators after losing four-straight games, including getting swept at Mississippi State. But after a slow start on Wednesday against LSU, the Gators took care of business against LSU. UF still has exemplary marks against all the important tiers, while also playing a tough schedule. It remains locked in at the No. 1 spot.

The skinny: The Cardinal played a tough non-conference schedule and remains comfortably ahead of Oregon State in the Pac 12 standings. Stanford has lost just two series all year long, and they were on the road — at UCLA and Oregon State. Look for the Cardinal to be rewarded for their consistency.

The skinny: The Beavers have a couple of warts on their resume, including a series loss to lowly Utah earlier this season. However, they’ve been incredibly consistent since second baseman Nick Madrigal returned to the lineup. OSU finishes the regular season with a home series against UCLA. Win that series and it would be a surprise to see the Beavs outside the top three.

The skinny: The Bulldogs dropped their opening game of the SEC tournament to Texas A&M, but remain in very good shape for a national seed. The overall metrics look good for the Bulldogs, but need to avoid going 0-2 in the league tourney to avoid slipping a little in the pecking order. You could make a strong argument the Hogs deserve to be ahead of the Bulldogs, but also remember that Georgia just took two of three from them a week ago, granted it was at home.

The skinny: The Hogs looked the part late Wednesday night in an offensive onslaught against South Carolina, and remain in very good shape for a national seed. Sure, the Hogs still have that losing record on the road at 6-13, but the other metrics are so good I’m not sure that even matters. The 15 wins vs. RPI Top 25 loom large, and it’s something the committee will take notice of later this week.