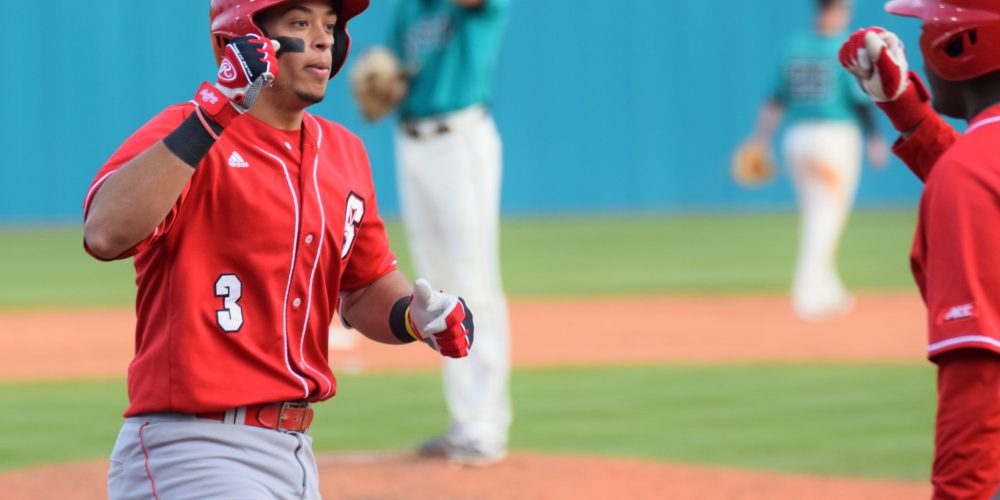 Most Exciting Player: Corbin Burnes, rhp, St. Mary’s. With a fastball that regularly reaches the mid-90s and three quality offspeed pitches, Burnes has electrifying stuff that will make him a premium draft pick.

Best Hitter: Connor Owings, of, Coastal Carolina. The younger brother of big leaguer Chris Owings dramatically improved his approach from last year to this year and became a complete hitter, showing the ability to hit for average (.383) as well as power (15 HR).

Best Defensive Player: Joe Dunand, ss, NC State. Alex Rodriguez’s nephew is bigger than your average shortstop, but he has premium instincts, body control and arm strength, and his shift from third base last year to short this year turned NC State’s infield defense into a strength.

X-Factor: Jason Bilous, rhp, Coastal Carolina. The blue-chip freshman worked his way back from Tommy John surgery and seemed to find his stride down the stretch; when he’s on, he’s capable of dominating with a 92-96 mph fastball.

Best Starting Rotation: Navy. The Midshipmen have one of the nation’s most accomplished aces in Luke Gillingham and three rock-solid starters behind him, helping them rank fourth in the nation in ERA.

Best Offensive Team: Coastal Carolina. The Chanticleers have serious power, serious speed, and no easy outs in the lineup, helping them rank in the nation’s top 15 in batting, OBP, slugging, home runs, stolen bases and of course scoring.

Best Defensive Team: NC State. The Wolfpack is fielding at a .964 clip, best in this field and 45th-best in the nation; Andrew Knizner, Dunand, Stephen Pitarra and Josh McLain make this team outstanding up the middle.

No. 1 Seed Win Probability (1-10): 4. Coastal Carolina is one of the most complete teams in the whole tournament and the most dangerous No. 2 seed in the whole field, and St. Mary’s and Navy both have the arms to make some serious noise. NC State is a balanced, experienced club that will get a boost from playing at home, but the committee did it no favors by giving it a date with Gillingham in the opener. And NC State’s starting pitching is a real concern.

After falling just a few outs shy of a super regional berth last year, NC State entered this spring ranked No. 10 in the preseason and lived up to that billing, finishing No. 10 in the RPI and racking up 19 wins against the RPI top 50 (tied for second-most in the country). The Wolfpack stands out most for its balanced offense, which features legitimate threats from 1-9. A major key has been the emergence of an exciting group of sophomores, who have taken advantage of their increased playing time.