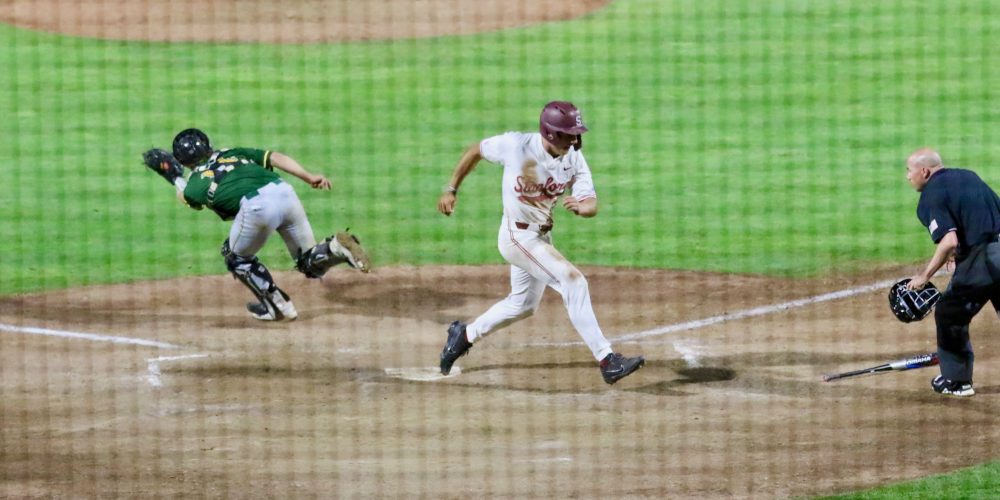 STANFORD, Calif. — “Unless they bring the Red Sox and the Yankees into a regional, I’d say this is the toughest regional I’ve seen for sure,” Wright State head coach Jeff Mercer said.

Mercer and his fourth-seeded Raiders gave regional host Stanford, the NCAA tournament’s No. 2 overall seed, all it could handle, matching up with the Cardinal’s early round draft pick ace and scoring against its All-American-caliber closer.

Wright State sent the game into extra innings where both teams persevered through tense, hold-your-breath, rub-your-lucky-pineapple situations until the game’s fifth hour when a defensive replacement, Christian Robinson, hit a walk-off double inside the first base bag.

“Honestly, coming out of the box, I thought it was an out,” Robinson said. “It just happened to get under his glove.”

The ball took a funky bounce, clipped off first baseman Gabe Snyder’s glove and went into the right field corner. Andrew Daschbach scored from first base giving Stanford a 4-3 win in 13 innings.

“I missed,” Wright State righthander Jeremy Randolph said. “I was supposed to throw an outside fastball. I missed in. He put a good swing on it. It just took a tough hop.”

Randolph took the loss despite a remarkable 6.2-inning, 85-pitch effort out of the bullpen. He allowed four hits and one walk, but was undone, in part, by plunking Daschbach with his first pitch in the 13th inning. He got the next two outs, but it took one bad bounce to upend the Raiders.

“A heck of a playoff game. That was playoff baseball at its best,” Stanford head coach David Esquer said. “My hats off to Wright State. They’re a heck of a team.”

Some have called the Stanford Regional this year’s ‘Regional of Death’ for putting together four of the top teams in each seeding group. The Cardinal is the No. 2 overall seed in the tournament, but was paired with a second-seeded Baylor squad that entered the postseason having won 22 of 25 games, a three seed Cal State Fullerton that won 13 of its final 16 regular season games and Horizon League champion Wright State as one of the tournament’s best four seeds.

It played out as such with Stanford needing 13 innings to get by the Raiders after Fullerton ‘upset’ Baylor in a game that was a one-run ballgame until a dropped fly ball in the ninth inning allowed the Titans to add on three bonus runs for a 6-2 win.