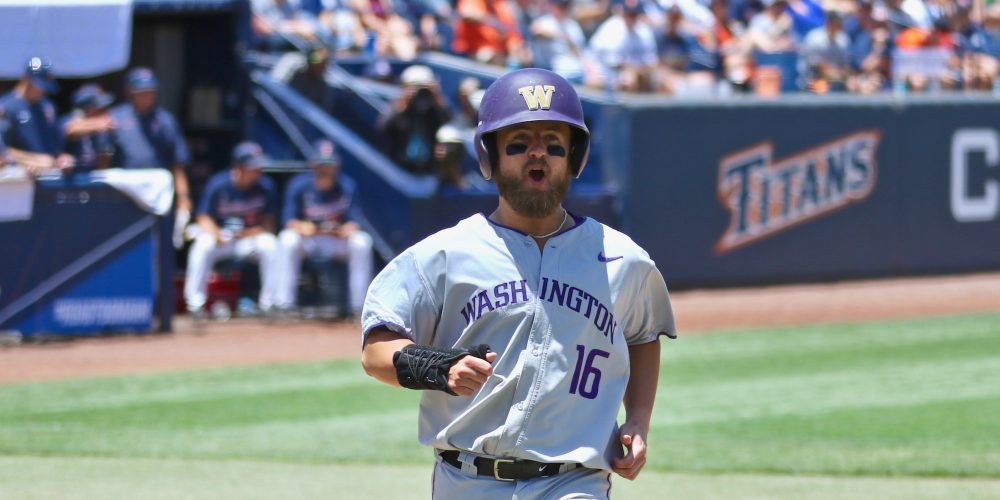 FULLERTON, Calif. — Cal State Fullerton ace Colton Eastman had been pitching backwards throughout the game, relying on his offspeed offerings more than his fastball. The third time though the lineup Washington was searching for pitches to jump early in the count, so after Braiden Ward hit a leadoff single on the second pitch he saw, Nick Kahle took a strong hack on a first-pitch changeup.

The pitch was down the middle, but Kahle didn’t line it up. He sent a high pop toward foul territory. Third baseman Brett Borgogno didn’t have to move far to his right to get in position for a catch. Suddenly, he diverted his path, running out of the way. Borgogno lost the ball in a noon hour sun. The ball dropped harmlessly to the ground five feet foul of the third base line at Goodwin Field.

Kahle fouled off a changeup and then a curveball before Eastman delivered a fastball that Kahle lined to center field for a single. The next batters grounded out on the first pitch and flew out on the second pitch of the at-bat. If the pop up had been caught, that would have been the end of a scoreless inning. Instead the first out moved the runners up, the second scored the go-ahead run. AJ Graffanino followed by dumping the next pitch into center field to put the Huskies ahead 4-2 in the fifth inning.

In a 10-pitch sequence, Washington turned the tide with five aggressive hitters and a little help from the sun. The Huskies would not relinquish the lead, taking an 8-5 win over Fullerton that was punctuated by freshman Kaiser Weiss’ two-run double in the ninth inning after he fell behind 0-2 in the count.

“That’s kind of how our season has been,” Washington head coach Lindsay Meggs said. “We started off the year with [an] 0-2 [count] and we’ve fought our way back to put ourselves in a position that a lot of teams want to be in, so I’m really proud of our guys.”

The Huskies (34-23) are now one victory away from the program’s first College World Series appearance.

Washington took advantage of a number of Titans’ gaffes, including the sun ball that needed a confluence of circumstances, starting with the NCAA’s decision to schedule the game for 11 am local time — two hours earlier than a normal afternoon start during the regular season. Head coach Rick Vanderhook wanted his team to acclimate to the brunch-time start. He scheduled his practices this week over the same time slot, but the Titans weren’t able to prepare for pop ups looking into the sun.

“We haven’t had any sun. We’ve been up early, but it’s been cloudy every day. The sun surprised the third baseman. I guess it wasn’t out when he came out to the field at 8,” Vanderhook said in a dry tone after Borgogno tried to take on the sun himself, without wearing sunglasses.

His mistake was not the only one. The Titans (35-24) tied a season-high with five errors in the game, adding to Washington’s 14-hit offensive output — the second most the team has allowed this year.