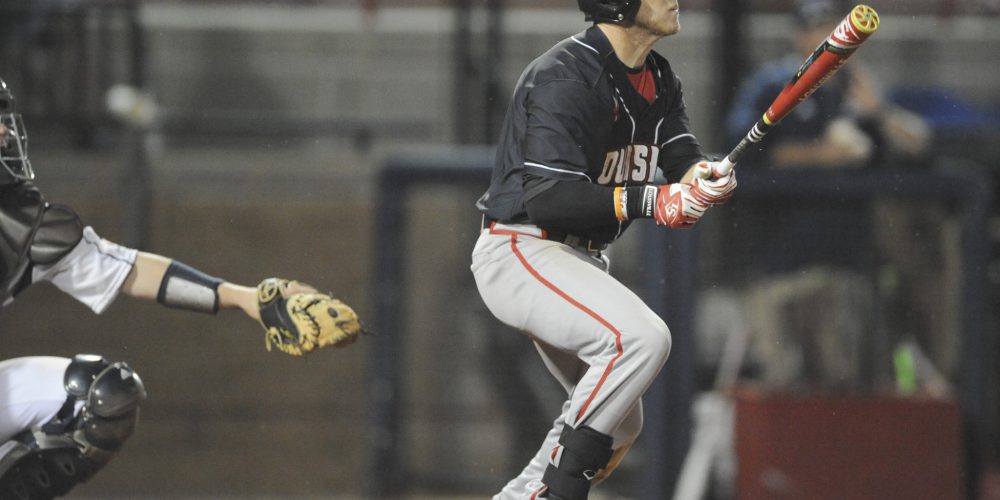 MOBILE, Ala. — These two Sun Belt rivals have been battling each other for years. From Steve Kittrell to Jonathan Lucroy to David Freese to Blake Trahan, these two programs have more often than not had a say in who won the conference title. Through the seasons, they have had countless epic games. Saturday evening, on a picturesque night at Stanky Field, the pair waged another classic in a series packed with emotion.

In a briskly paced game that completed nine innings in two hours and got through eleven innings in 2:35, Louisiana’s Ragin’ Cajuns captured a 5-4 decision from South Alabama to even the series. The Jaguars won the series opener 3-2 Friday. The teams have played 20 innings this weekend and are even in games and runs.

“These two programs have been storied for a long time battling each other,” said UL coach Tony Robichaux. “This is great college baseball. They swung, we swung, and we just outlasted them.”

On Friday, it was South Alabama that took advantage of a first inning Cajun error to score. Saturday, the Ragin’ Cajuns scored a pair of unearned runs in the first inning and held that 2-0 lead until the seventh inning.

UL starter Nick Lee, a 6-foot-5, 190-pound freshman righthander from Longville, La., got a lot of early count, weak contact. Lee worked 6.1 innings and allowed just five hits, two runs, and walked one. He struck out six in his 92 pitch effort. He was cruising until a three run Jag seventh highlighted by back-to-back doubles from Jared Barnes and Ben Gann ended his night.

“Nick just threw outstanding,” said Robichaux. “He is really, really good. Right there at the end he hung a slider and mislocated a fastball. He is going to learn from that. But to come out at South Al and do what he did as a true freshman, that is tough to do. We knew we had a special guy when we signed him. We knew his pitchability was good. He has a great changeup as a weapon. That is what makes him be able to pitch is that changeup.”