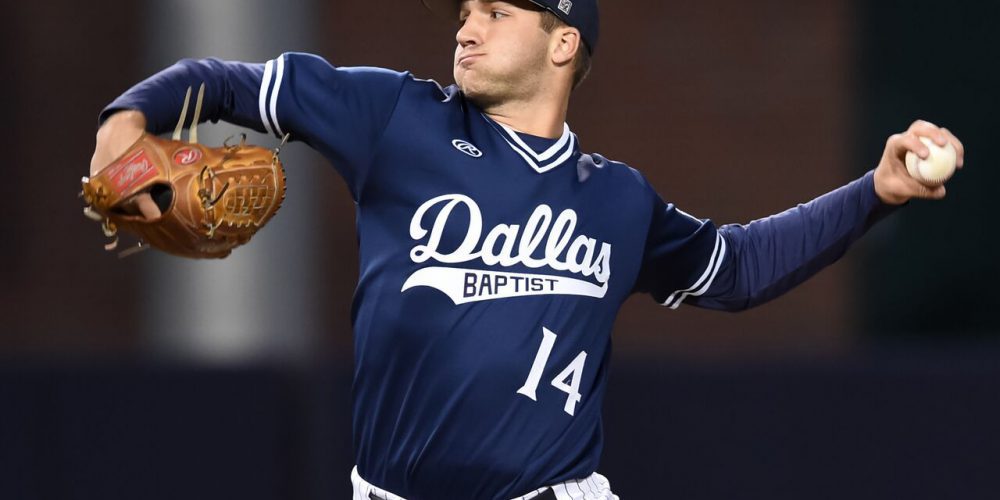 DALLAS — Colin Poche started off Friday by allowing a single and a two-run home run, and when his teammates came back with crooked numbers in the second and third innings to put Dallas Baptist up for good in a 9-5 win over Missouri State, it didn’t look like pitching would be the story of the night.

After allowing those two runs, the junior lefthander set down 18 of the next 21 Missouri State batters, 14 of them by strikeout, while allowing only three more baserunners over the rest of the game. Poche’s 14 strikeouts were not only a career high, he set a season high for DBU as a team in the sixth inning.

“He’s got great fastball command, but he had a really good breaking ball too,” DBU head coach Dan Heefner said in his postgame remarks. “You put those two together and he’s going to be really tough to hit.”

Indeed, Poche got up to around 90 with his fastball and located it well throughout the strike zone, working off that to a low 80s breaking ball with movement on both axes. Poche managed to make that work by elevating the fastball, then running the breaking ball low and away to lefties and low and in to righties.

After allowing the first-inning home run to Missouri State’s Alex Jefferson, Poche faced a stiff test: Jake Burger and Spencer Johnson, Missouri State’s enormous (and right-handed) 3-4 hitters. Coming into Friday’s action, Burger was hitting .375/.453/.729 and Johnson was hitting .293/.406/.672, and among all Division I players, they were first and tied for seventh, respectively, in home runs. Poche struck both out, then followed by striking out Matt Dezort to end the inning.

“After (the home run), I knew that if I just kept executing my pitches, I would get guys out, and they weren’t going to hit every ball out of the park,” Poche said.