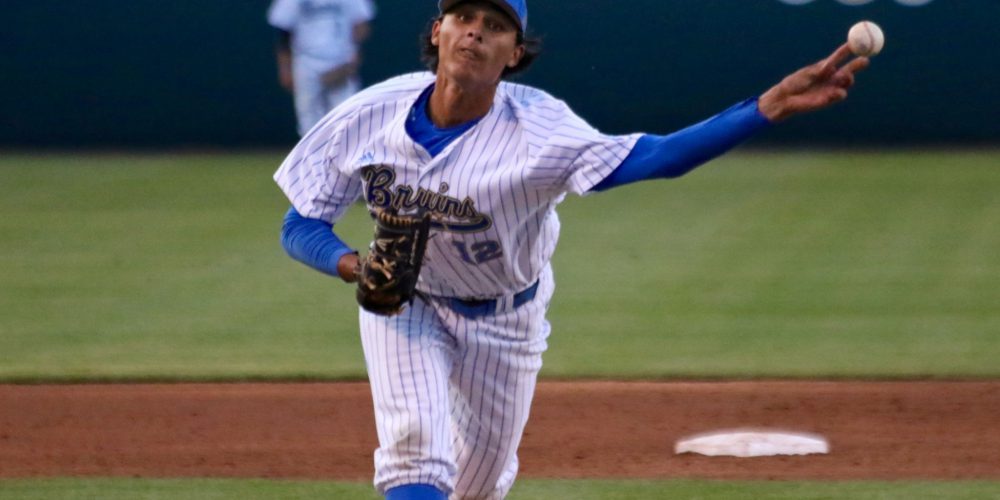 LOS ANGELES — Justin Hooper has been one of the biggest disappointments this season. The blue-chip lefthanded pitcher told MLB teams that he was going to UCLA rather than being an early-round draft pick, but he hasn’t turned into an instant impact arm for the Bruins as was expected.

Hooper has struck out more than a batter per inning, but those strikeouts seem to be the only time he has thrown strikes. He has made 11 appearances, pitching seven innings, but has given up 15 earned runs on just six hits. Hooper has walked 12, hit five and tossed four wild pitches.

The 6-foot-5, 220-pound southpaw has shown flashes of the pitcher he can be. He struck out three in 1.2 innings in his second outing this season and came in the ninth inning to strike out a lefthanded hitter against California. There are signs that Hooper is turning things around. He has given up a free pass in only one of his last five outings.

Hooper has been at his best in a pair of outings against Pepperdine. He earned his first career win with a scoreless eight-pitch inning that featured two strikeouts the first time the two teams met on April 19. He followed that up on Tuesday with a quick and efficient 1-2-3 inning against the Waves. His fastball was 91-94 mph and he needed just eight pitches to get three ground balls.

“It’s going to take time clearly, but I think you can see the potential and the possibility of him being a legitimate guy in our program the next two years.”

Savage thinks Hooper has a bright future that could follow along the career paths tall, lanky lefthanders Andrew Miller at North Carolina and Randy Johnson at USC, who struggled with command at times, but ultimately put everything together to become successful major leaguers.

Here are more observations and notes from around the West Coast:

〈
Previous Article Sorenson: Off The Top Of My Head
Next Article Top Performers: May 12
〉