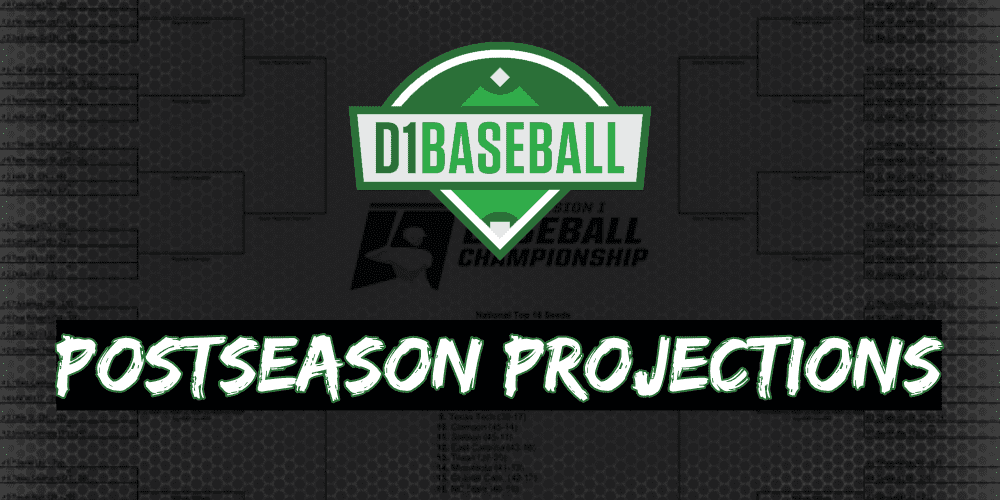 We’re already at the midseason mark, and with that, we bring you the first in-season edition of our postseason projections.

The sheer depth of the Southeastern Conference, and the power at top of the Pac 12 rate as two of the biggest storylines in college baseball so far this season. Both of those developments show their effects in our first projection, though these will obviously change as we get closer to Selection Monday.

Interestingly, the ACC has been down so far this season. Florida State, which you typically count on to be a Top 16 club, is scratching to make the field, sitting with an RPI around 90. Teams like Duke, Virginia and Wake Forest have been significant disappointments. NC State and Clemson are the lone ACC Top 16 seeds this week. NC State leads the league and still has lost just three games, while Clemson has a 9-3 conference record, with the series against Notre Dame its only blemish.

The Big 12 also has just two Top 16 seeds: Texas Tech and Texas. The Red Raiders have a strong RPI with an excellent non-conference strength of schedule, and they are on course to finish the season in strong fashion. The Longhorns have an RPI of 20 with other good metrics, including the No. 37 non-conference strength of schedule, a 7-5 mark vs. RPI Top 25 teams and an 11-5 record vs. the RPI Top 50. Oklahoma State, which fell just outside the Top 16 this week, is a team to keep an eye on. The Cowboys are trending the right direction and up to 19 in the RPI.