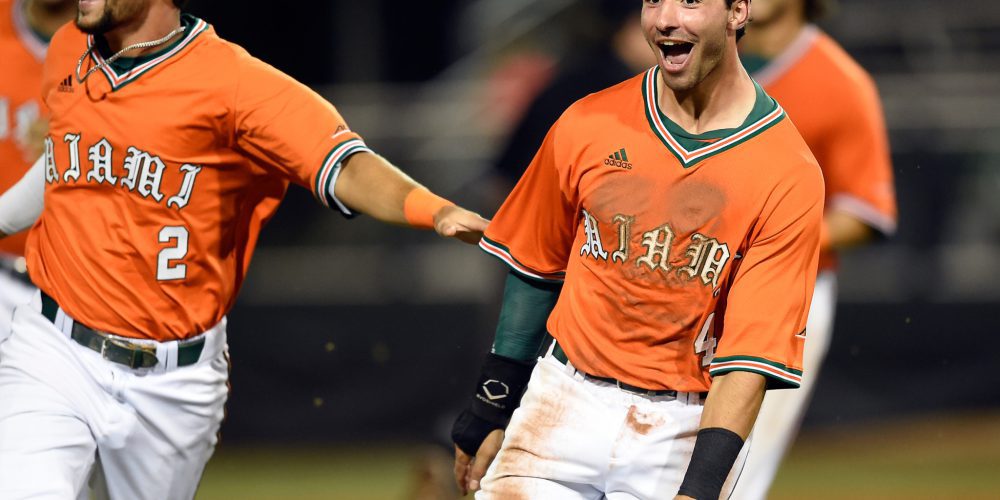 With 14 weeks in the books and the postseason finally here with the arrival of conference tournaments in many leagues around the country, we’re nearing the NCAA tournament, which means it’s time to roll out the next projection of our field of 64. This field was composed by D1Baseball national writers Aaron Fitt, Kendall Rogers and Mark Etheridge in a Tuesday night teleconference that we recorded and posted as a two-part podcast, so you can hear our deliberations about national seeds and hosts, as well as the race for at-large spots.

In terms of the national seed picture, there were no significant changes in the top eight in terms of teams coming out or entering. Virginia and South Carolina remain the final two teams in the national seed mix, while the top national seed saw a change with Miami taking over after Florida lost a tough series at LSU. The Hurricanes have been incredibly consistent this season and are followed by top-ranked Texas A&M, surging Louisville and Florida at the No. 4 spot. In all, the SEC has four national seeds, the ACC has three and the Big 12 is the only non-ACC/SEC league to have a team in the top eight, as Texas Tech continues to be firmly cemented as a national seed.

The host situation just got a little crazier this week. Last week, we had Southern Mississippi, Arizona and Cal State Fullerton as host sites. However, Arizona dropped another series, this time on the road to Oregon and the Titans dropped an ugly home series to Hawaii, thus dropping their RPI well into the 40s and out of hosting contention for the time being. Arizona State is your lone host site out West and is hosting as a two-seed, while Louisiana-Lafayette and Clemson are your other new hosts. The Cajuns have a solid mark vs. RPI Top 50, won the regular season Sun Belt title, a stellar non-conference SOS and a good RPI, while the Tigers have had a great RPI the entire season, and are now starting to reestablish consistency.

Interestingly, the ACC leads the way with 10 postseason bids with Boston College as its final team in the field, and North Carolina narrowly out of the mix, while Oregon State could be called the final team in our field of 64. Furthermore, new entrants into this week’s field include Bethune-Cookman, Ohio State, Boston College, Pepperdine, Mercer, Sam Houston State and Oregon State.