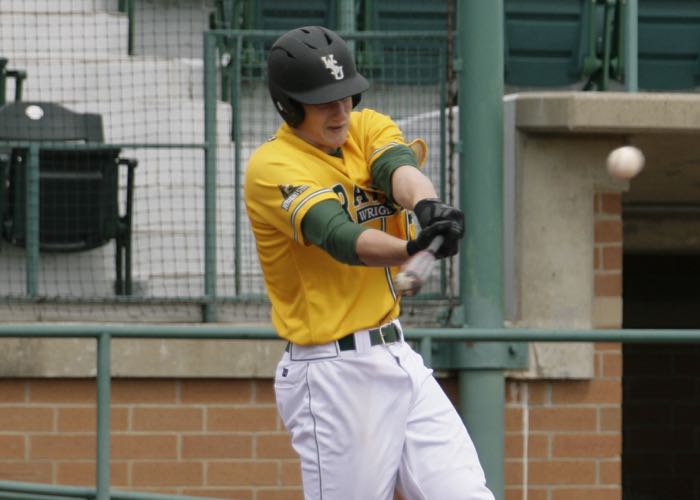 • Wright State probably can’t improve on a 25-4 conference record, but the Raiders might be better this year than last, despite significant losses to graduation. WSU has amassed impressive depth across the board, and will probably be able to plug every hole in the lineup and starting rotation without using any true freshmen. The returning players are also pretty good: sophomore catcher Sean Murphy (.301/.390/.442) is a switch-hitting terror with second-day draft potential for 2016. Friday night starter Robby Sexton headlines a rotation with a few question marks, but closer Andrew Elliott came back from a year’s layoff to contribute an absurd junior season: 61 strikeouts in 41 2/3 innings. Tops among the new arrivals, junior Jesse Scholtens—a transfer from the University of Arizona by way of Diablo Valley JC, is a 6-foot-4, 223-pound workhorse who struck out about a batter per inning in juco ball. 2B Michael Timm is the last foundational piece of the heavy conference favorite: The 6-foot-4 senior rebounded from a down sophomore season to post a .325/.407/.467 line in 2014, and his 11 HBP, tops among returning Raiders, show he’s not afraid to get dirty. Wright State won the regular season crown by 8 ½ games last year, and it’ll take quite an effort from UIC to stop something similar from happening again. With a nonconference schedule that includes Mississippi, Miami and Kentucky, we’ll see if the Raiders can be a spoiler in regional play—assuming the Raiders get there—or if they’re just the class of a weaker league.

• Illinois-Chicago takes a big hit at the top of the rotation with the departure of Friday night starter Tomas Michaelson to the pros, but the Flames replace him with Trevor Lane, a lefty from Lower Columbia CC. Lane, who can play some outfield as well, is on the small side for a No. 1 starter, but compensates with good athleticism, deception and command of a three-pitch mix. Another juco transfer, sophomore lefty Jake Dahlberg, will slot behind him in the rotation and offers a high-80s fastball with good late movement. Any ambitions UIC has of taking down Wright State depend on these two capitalizing on their potential. UIC’s position players are much more encouraging. The best thing about UIC’s team is that their center fielder is named Zenon Kolakowski. Apart from having an exquisite name, Kolakowski is a strong defender who gets excellent jumps and also has good bat control. But Jeff Boehm is the focal point of the offense. He slugged .543 last year as an all-conference first baseman and figures to get some time in left field and on the mound as a senior as well. Catcher Tyler Detmer hit .330/.430/.476 last year while playing a utility role (he was an all-conference outfielder and can play third base), and could receive some attention in the draft if he can adapt to catcher as well.

• Wisconsin-Milwaukee loses conference player of the year Ryan Solberg but might be able to mount a challenge to Wright State if the Panthers get better luck with injuries this year. Junior CF Luke Meeter missed all of last season, and senior Sam Koenig could come back to challenge for conference player of the year honors after a broken hand limited him to 10 games in 2014. Senior 2B Mike Porcaro was the Horizon League player of the year in 2013 before he struggled to play through a wrist injury in 2014, and catcher Mitch Gehlfi likewise couldn’t find the form that made him a freshman All-American in 2013. If those four players, plus pitcher Mike Schneider, can come back as their best selves, Wisconsin-Milwaukee will be rounding into a dangerous, senior-laden team after a grueling nonconference schedule that includes trips to Louisville and Missouri and an exhibition game against the Milwaukee Brewers.

• Valparaiso LHP Dalton Lundeen has a name like the heroic lawman in a spaghetti western and therefore wields a baseball like an instrument of justice. Lundeen overcame an early-season run-in with mononucleosis to turn in 83 1/3 outstanding innings—65 strikeouts against only 12 walks and a 1.95 ERA. He shared conference pitcher of the year honors last year and is a clear favorite have the award to himself this year. Lundeen returns to headline an experienced starting rotation that will have to carry the Crusaders this year—they weren’t very good last year, with a team slugging percentage of just .301, and they turn over starters at five spots, including catcher, where incumbent starter Jake Hanson will miss the year with Tommy John surgery. A mid-table finish is very likely in 2015.

• Youngstown State pulled off a preposterous upset in winning the Horizon League tournament and earning the right to participate in what ended up being a pretty wild Bloomington Regional. Though a conference championship and an NCAA tournament win over Indiana State—the first in the program’s history—put a good finish on the season, the Penguins finished dead last in the conference’s regular season, went 17-38 overall and failed to land a single player on the all-conference team. Youngstown State’s hopes for improvement rest with an experimental pitching staff: Josh North and Jeremy Quinlan move to the weekend rotation full-time, where they’ll be joined by sophomore lefty D.J. Carr, who posted impressive numbers at Chandler-Gilbert CC last year. In the bullpen, closer Kevin Yarabinec could remain in the role where he struck out a batter an inning last year, or he could move to the rotation, while the coaching staff is optimistic about senior Ryan Krokos’s new sidearm delivery, which should help him put last year (37 2/3 IP, 9.32 ERA, 10 K, 19 BB) behind him.

• Oakland kicks off the year with an ambitious nonconference schedule: three games at Florida State, three games at Southern California, then two games at Arizona, after which the strength of schedule falls off a bit. So too with their roster: star of the team is senior OF Robby Enslen, who broke out last year with a robust .378/.429/.522 batting line in 207 plate appearances. After Enslen comes junior SS Michael Brosseau (.321/.383/.432), and after that, a lot of question marks. After a shellacking in its first season in the Horizon League, Oakland lost its top two starters, Tim Koons and Jake Paulson, to pro ball, and two others, Kendall Colvin and Logan Sparkman, to Tommy John surgery. In their place are juco transfers Aaron Dehn and Alex Mason and converted catcher Jake Morton.

To view our Top Prospects lists for the 2015 and ’16 draft classes, as well as our Impact Freshmen, sign up for a D1Baseball.com subscription..