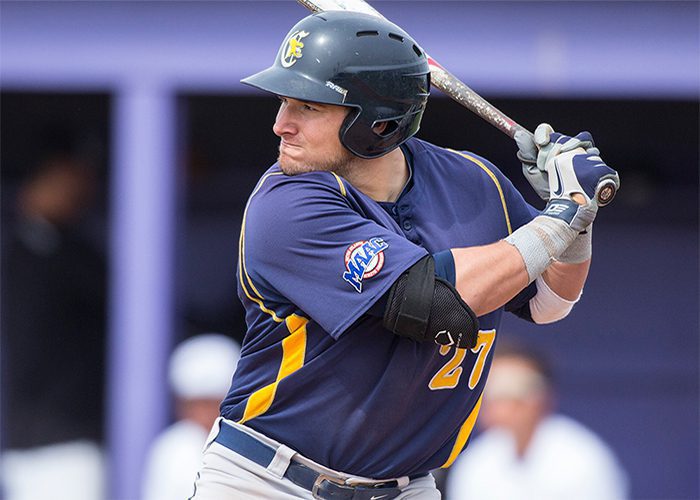 NCAA postseason teams in bold, records are from 2014.

Player of the Year: Connor Panas, 3b, Canisius

TOP PROSPECTS AND NEWCOMERS: (Must be a Subscriber to view)

In six of the last seven years, Canisius has posted the most wins of any team in the MAAC, yet there has been only one NCAA tournament appearance in that stretch. Get hot at the right time this year guys. The Griffins could post their third straight 40-win season as four hitters who went .333 or better and 41 of the 56 starts on the mound return. There will be plenty of speed to burn out there with SS Anthony Massicci (.364, 12SBs), 3B Connor Panas (.362-6-51, 16SBs) and CF Mike Krische (.275, 18SBs). They’ll get an additional shot of power from highly-regarded RF Brett Siddall (.333-3-43). Staff ace Rohn Pierce will be missed, but LHP Alex Godzak (10-3, 2.63) tossed four complete games and RHP Brandon Bielecki (3-1, 2.70) earned five saves. The coaching staff also raved over the fall emergence of RHP Josh Shepley (3-1, 5.93), who could move into the weekend rotation. Shepley did a terrific job of getting in better shape during the offseason and could be ready to take a step forward, while senior righty Devon Stewart (4.38/90.1) has good velocity on his fastball and could take a huge step forward in terms of consistency if he can command his three pitches well. Keeps close tabs on talented freshmen position players 1B Ryan Stekl and OF Adam Tricarico. Both youngsters showed a lot of power potential in the fall and should be instant impact guys.

There may not be a more experienced team in the country than the Fairfield Stags. Seven starters return to the batting order, five of them being seniors, led by DH Sebastian Salvo (.354) and OF Alex Witkus (.271, 29SBs). Nine of the top ten pitchers are also back, all of which are juniors and seniors. All-MAAC RHP E.J. Ashworth (6-2, 2.85) leads the weekend corps and RHP Andrew Gallagher (2-1, 1.64, 3 saves) and Tucker Panciera (7-3, 3.98) will take on bigger roles. The defense fielded at a .970 pace and has four-fifths of the infield returning, led by C Jake Salpietro (.307-5-44), who is also a thump at the dish.

Siena did its usual trick of tripping all over itself at the beginning of the season, limping out to an 0-17 mark last year. But eventually, the Saints won four-straight games to win the MAAC tournament, then put a big time 11-inning scare in TCU and even eliminated Dallas Baptist in the Fort Worth Regional. RHPs Ed Lewicki (4-7, 5.75) and Bryan Goossens (3-5, 6.28) return to the weekend rotation and have been four-year and three-year starters, respectively. RHP Matt Quintana (4-3, 4.26, 2 saves) has made 62 appearances in the previous three seasons. OF Dan Swain (.293, 12SBs) and Justin Esquerra (.290) will be the leaning posts for the rebuilt offense. Lewicki needs to be more consistent this spring, but has a good curveball and has a hard-nosed demeanor, while RHP Taylor Ahearn is expected to be strong this spring after being a late bloomer last season, and RHP Rick Morales returns after being injured the past few years. Morales has a big-time arm, but getting back into a consistent groove could be an obstacle. Offensively, freshmen SS Jordan Bishop and Dh Joe Drpich should provide an immediate boost, while juco transfer OF Fred Smart is a versatile player with a combination of consistent offensive approach and athleticism/speed.

Monmouth took on some big losses from last year, but still should have a great defense (.971 fielding) with C Kyle Perry (.248) and middle infielders Grant Lamberton (.280) and SS Robbie Alessandrine (.266). Right-handed seniors Chris McKenna (4-4, 2.93) and T.J. Hunt (6-5, 4.95) return to the weekend rotation. Coach Dan Ehehalt says this team will go as far as their pitching takes them. LF Dan Shea and 3B Shaine Hughes are well-regarded but both were hurt in the first few weeks of last season and are back now. McKenna is one of the better pitchers in the league with a good fastball and good overall command, while Hunt has a wipeout slider that can be devastating at times. Also keep an eye on righthanded submariner Jeff Paglione who does a terrific job of keeping the ball down in the zone. Junior OF Dan Shea could be an interesting guy to watch this spring. Shea only played in eight games last year because of an injury, but has middle of the order type of power that could be dangerous for opposing teams.

Looking for a player to cheer for this year? How about Manhattan catcher Mikey Miranda, who has played just 26 games the last three years combined. He hit .300 in 21 games last year, but in both 2012 and 2013, Miranda played two games before being shelved due to injuries. The Jaspers also get back seven field starters and a pair of aces in RHP Joey Rocchietti (2-6, 3.26, .221OBA) and RHP Scott McClennan, who missed last year but pitched in the 2011 and 2012 NCAA Regionals. Rocchietti will sit anywhere from 88-92 mph with his fastball, along with command of all his pitches. In addition to his stuff, the talented righty is athletic and fields his position well. Meanwhile, McClennan will sit 86-88 with his fastball with a quick, clean, delivery, while closer Matt Simonetti is a quality arm to watch for the 2016 draft class. Simonetti will sit 88-91, but can get up to 92-93 at times with an aggressive, violent, delivery. Freshman lefty Tommy Cosgrove is another quality arm to watch. Cosgrove, our pick for Conference Freshman of the Year, has a load of immediate upside, sitting 86-90 with his FB with a smooth delivery and aggressive overall approach. 1B Christian Santisteban has a pro body and could be a very good hitter this season, while the Jaspers feel like SS Chiqui Carrera takes a step forward this spring. Carrera is a game-changer with good tools. He has good speed and defensive skills, and his offensive skill set is expected to ooze out this spring.

Marist has six of the seven top pitchers returning from a year ago, including Rich Vrana (2-7, 5.11) and reliever extraordinaire Ryan Thomas (1-4, 3.82, 7 saves, .234OBA). But the offense hit a very light .242, which explains why the Foxes were outscored by 52 runs in the first three innings of games a year ago. The Red Foxes could rely on talented freshman righthanded pitcher Michael Hunter quite a bit this season. Hunter has a skinny 6-foot-6, 200-pound frame, but there’s plenty of upside if he can grow into that frame moving forward.

Niagara has slowly become more and more competitive in MAAC play the last few years. But 2014 was a step back with just eight wins and the prospects for 2015 are dicey, due to the little amount of experienced pitchers on hand. Sophomores Cody Eckerson (5-1, 4.08) and Liam Stroud (0-5, 4.76) hope to reach a comfort level as weekend starters. The top five hitters in the order return to campus, led by juniors Taylor Hackett (.310) and Greg Rodgers (.308). OF Anthony Firenzi (.283) can be a difference-maker with his speed (11SBs). The Purple Eagles do have the tough chore of replacing ace prospect and righthander Jordan Schwartz, who tallied a 3.12 ERA in 95 1/3 innings last season.

Everything got a little bit better for Iona last season, increasing their win total from eight wins in 2013 to 13 last year. Better yet, the offense hit .255 (which is actually good comparatively speaking), played .968 defense (three of four infielders return) and had a team ERA of 5.28 (nine of top 11 pitchers return). The Gaels will get the return of 2B Matt Byrne (who hit .375 in 2013) and LHP Eddie Macaluso, (who had 165 starts in his first two years) as both missed most of last season. Also keep an eye on redshirt junior righthander Mariano Rivera III, who had a 5.40 ERA in 70 innings last year, but whom the Gaels feel could turn the corner this spring.