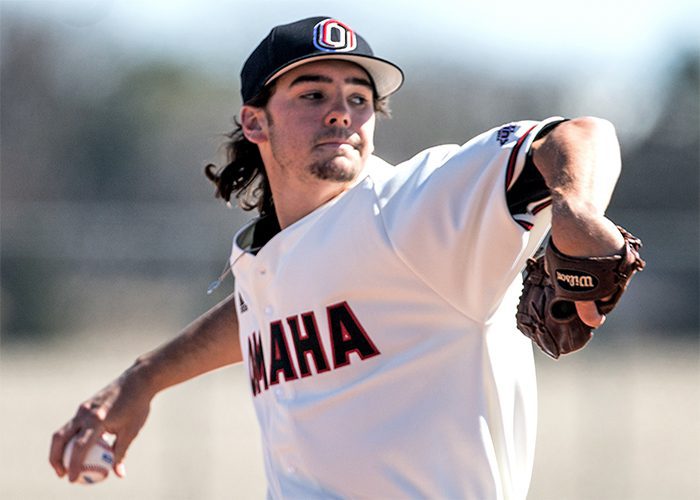 Projected NCAA postseason team is in bold, records are from the 2014 season.

Freshman of the Year: Brayden Resch, 1b/c, North Dakota State

Subscribe to D1Baseball.com to view additional premium content, which includes the Summit League top prospects for 2015 and ’16, along with the league’s most impactful freshmen/newcomers.

Led on the mound by junior right-hander Guillermo Trujillo, Oral Roberts makes the move to the Summit League, and it should be the favorite this season. Trujillo is coming off of a sophomore campaign that included a 3.11 ERA in 81.0 innings with 63 strikeouts and a .252 batting average against. Righty Jacob McDavid, who makes the move to the rotation after posting a 2.36 ERA and .196 batting average against in a relief role last season, and Kurt Giller, who had a strong fall practice session, should round out what will probably be the best rotation in the league. Although Oral Roberts does return a lot of at bats, pitching will probably have to be what this team relies on as it looks to replace Tyler Boss (.347/.407/.457) and Jose Trevino (.304 batting average with 10 homers). Senior infielder Matt Brandy (.277/.362/.357) will likely be the best offensive producer. ORU’s weekend rotation is rather intriguing. Trujillo should be a decently high draft pick in the summer, sitting 90-95 mph with his fastball, along with four pitches he can throw for strikes, but that could also use some refining. Meanwhile, Giller is 88-92 mph with his fastball and is coming off a great fall, and McDavid is up to 92 and makes the conversion from the bullpen to the starting rotation.

After a sensational redshirt sophomore season, junior infielder Clayton Taylor is back for Nebraska-Omaha. From the left side Taylor hit .342/.421/.599 last season, and was named first-team All-Summit League. He’s joined by stolen base machine Cole Gruber (.319 batting average and 34 stolen bases in 2014), senior outfielder Daniel Jewett (.333/.415/.420 last season), and junior outfielder Alex Schultz (.302/.414/.368). So although there will be several newcomers in the lineup, the nucleus is there. On the mound, junior righty Tyler Fox comes off of a sophomore campaign in which he was named Summit League Pitcher of the Year. Zach Williamson joins him in the rotation, but then the third and fourth spots get a little harder to project. If this club can find the bullpen production it received last season, the pitching should be fine, which will allow it to compete for a league title. Williamsen, in particular, is an intriguing arm to watch. The veteran righty had a 3.47 ERA last year, and could see his strikeout numbers improve with a big arm and durable frame.

There is experience and then there is returning 96-percent of what was arguably the league’s best pitching staff last season, which is what South Dakota State is returning. Right-hander Adam Bray could have easily been named the league’s top pitcher after posting a 2.95 ERA with 95 strikeouts and just 17 walks in 103.0 innings last season. He’ll be joined by lefty Chris Anderson (2.48 ERA in 2014), righty Chad Hodges (3.00 ERA in 2014), and South Dakota State all-time saves leader J.D. Moore (3.07 ERA and .214 batting average against last season). The offense will need to find some production, but junior Zach Coppola and sophomore Matt Johnson are emerging stars in the league. Johnson was named to the California Collegiate League All-Star Team this past summer. Bray, a senior, will sit anywhere from 87-90 mph with his fastball and has a mature approach in attacking hitters, while the rest of the rotation includes a pair of seniors, including Hodges, who has a chance to take a big step forward with a fastball up to 91 and a quality slider.

North Dakota State, like South Dakota State, will rely on its pitching and defense as it tries to make the NCAA Tournament in back-to-back seasons. Left-hander Parker Trewin returns after an outstanding season (2.57 ERA and .225 batting average against in 77.0 innings) and right-hander Reed Pfannenstein (2.86 ERA with a .244 batting average against) is expected to move into the rotation. Closer Trevor Juanich is back, an struck out just over a batter per inning (31 in 28.1 innings) last year. Unfortunately for the Bison, they’ll have to replace their three top hitters from last year’s team, including Summit Player of the Year in Tim Colwell. Runs might be hard for North Dakota State to fine during the early portion of the season, but keep an eye on freshman Brayden Resch.

Offensively, Western Illinois should have some presence in the middle of the lineup, but needs to surround it with production. On the mound, the Fighting Leathernecks need some returning pitchers to take the next step. Western Illinois hit .288/.353/.360 as a team last year with 89 steals, and a good amount of that production comes back. Catcher Adam McGinnis is coming off a strong summer, and J.J. Reimer is back after hitting .293/.361/.400. However, last year’s pitching staff posted a 5.43 ERA with a .281 batting average against. That’s not going to get it done. If Preston Church is able to harness his stuff and Nick Milligan can make the move from reliever to starter, there is hope for the Fighting Leathernecks. Friday starting pitcher Tom Constand is a crafty lefty who will sit in the mid-80s with his fastball, while LHP Preston Church can get up to 89 with a high ceiling, and projected No. 3 starter, RHP Joe Mortillaro, has a lot of potential with a FB up to 92 with good sink and quality secondary stuff.

Similar to Western Illinois, IPFW has to get much better production on the mound in order to compete in the Summit League. In 2014, the Mastodons posted a 6.89 ERA and .318 batting average against mostly because of their inability to throw strikes. Transfer Trevor Storie and freshman Evan Miller could help change that. Offensively, top hitting Evan VanSumeren (.370/.466/.410 in 100 at bats) is back, but gone are Kristian Gayday (.358 batting average and 12 homers) and Steve Lowden (.333). Second baseman Greg Kaiser might have the best tools of anyone on the roster, and should help fill that production void. The Mastadons also have high hopes for 1B Kendall Whitman, who showed some power potential during fall workouts..