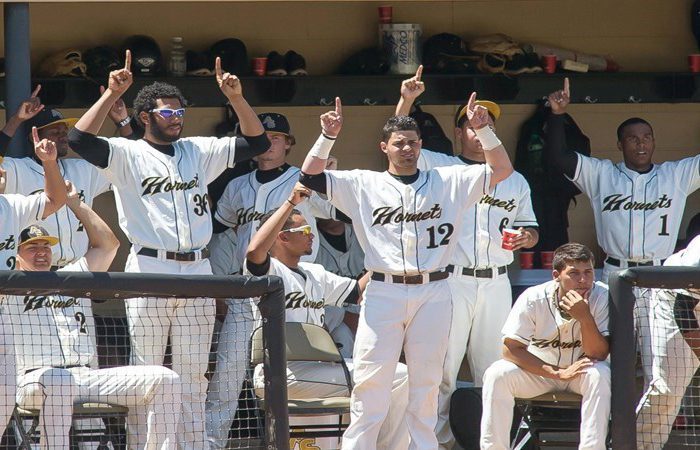 Player of the Year: Andrew Utterback, of, Alabama A&M

Freshman of the Year: Julian Jones, 1b, Arkansas-Pine Bluff

• After dominating conference play last season, Alabama State watched its postseason dream slip away against Jackson State in the SWAC championship game. The good news for the Hornets is that they’re again in the best position to be the class of the league. When a team returns two SWAC Pitchers of the Year, its rotation is probably going to be in fine shape. T.J. Renda, a senior righthander that won the award in 2013, and junior righthander Joseph Camacho, last year’s winner, lead the rotation. With a 2.44 ERA, Camacho finished with the conference’s second-best ERA and Renda issued just 17 walks in 85.2 innings. At the back end of the bullpen, hard-throwing 6-foot-4 righty Jorge Pantoja has the ability to emerge as one of the conference’s best relievers thanks to a fastball that bumps 94. Offensively, the Hornets return one of the best hitters in the conference, as Waldyvan Estrada is back for a senior season. Estrada posted a slash line of .347/.448/.515 last season, and will be a force in the middle of the lineup. Senior Einar Muniz, who hit .335 last season, is the gas that makes the engine go, and senior Cesar Rivera has a combination of power and speed that should profile nicely in front of Estrada. Big-bodied freshman Gustavo Rios, the brother of Florida International star Edwin Rios, should start right away at first base and bring additional pop.

• After a thrilling, 9-8 win over Alabama State in the SWAC tournament championship, Jackson State flirted with even more magic in the Lafayette Regional. The Tigers opened up the regional with a 1-0 win over national seed Louisiana-Lafayette and nearly knocked off Mississippi State before their run ended the next game. Like Alabama State, Jackson State is in strong position to again compete for the SWAC’s automatic bid. Last year’s SWAC Newcomer of the Year, Tilur Smith, is back, as is senior infielder Melvin Rodriguez (.311 hitter with three homers in 2014). With those two back in the mix, the Tigers should be one of the better offenses in the conference. But how well will Jackson State pitch? Desmond Russell, a first-team all-SWAC selection, moved on. However, righthander Alexander Juday (3.97 ERA last season) appeared in a team-high 21 games last season, and freshman righthander Chris Basilio has the ability to make an instant impact as the headliner of the Tigers’ recruiting class.

• Arkansas-Pine Bluff emerged from last season as the SWAC West Division champion, and it returns some key pieces from that puzzle. Senior infielder Isias Alcantar hit .328 with six homers last year, and senior Kirby Campbell is back in the lineup after batting .305 in 2014. On the mound, righty Mikey Ramirez returns after a junior campaign that included a miniscule seven walks in 88 innings with a 3.29 ERA. Lefty Jim Ploeger should join Ramirez as a big-time contributor on the mound. He nearly struck out a batter per inning (68 in 70 innings) last year with a 3.34 ERA. Experience and leadership shouldn’t be too much of an issue for UAPB. If it can surround those veterans with some talent, it can make some noise.

• Last season, Grambling State put a lineup on the field that included some of the conference’s better contributors on offense. Unfortunately for the Tigers, no regular contributor on the mound posted an ERA under 4.50, and teams hit .315 against them. So while top SWAC hitters like Yariel Medina (.335/.384/.453) and Diamyn Hall (.324/.356/.423) are back, and highly rated, 6-foot-4 freshman first baseman Jaiden France could make a difference too. The question the Tigers have to answer if they want to be legitimate contenders in this conference is this: can they get it done on the mound? Grambling’s top six pitchers from last year are gone, leaving Issac O’Bear (1-4, 9.00 in 28 IP last year) as the lone mound returnee who threw more than 14 innings last year.

• Texas Southern will again be able to rely on an offense that can create havoc with its speed. The trio of Marquis Webb (.324/.395/.361), Jerry Ford (.317/.388/.356), and Zach Welz (.304/.387/.387) is back after it combined to swipe 43 bags last season. And with senior infielder Robert Garza (six homers in 2014) providing some pop, the Tigers should be able to put some runs on the board and frustrate pitchers. If sophomore righty Ryan Rios can again put together a season like the freshman one that included a 3.25 ERA and .227 batting average against in 63.2 innings, that should give Texas Southern the No. 1 arm it needs to compete in this league.

• After putting up a ridiculous .398/.509/.579 line last season, junior OF Andrew Utterback is back to lead Alabama A&M this season. Throw in Austin Hulsey (.356/.410/.524) and this team has arguably the best one-two offensive punch in the league. And it’ll need it to carry the load because the pitching staff is coming off a season that saw it post a 6.46 ERA and .301 batting average against. Joshua Freeman threw just 28 innings last season, and was the one pitcher that showed signs of being a staff ace.

• Alcorn State was a team built around offense last season, and its most productive pitcher, Ryan Fuentes, moved on. Like Grambling State, Alcorn State is going to need to find some production on the mound in order to improve upon its middle-of-the-pack finish in 2014. While we’re at it, it’s fair to put Prairie View A&M in that category as well. The Panthers can slug with the best in the league, and should be able to again use the big fly as a source of run-scoring. But the strength of the pitching staff was in the bullpen last year, and it couldn’t do enough to offset the struggles of the starting pitching.

• It’s a new era at Mississippi Valley State as longtime assistant coach Aaron Stevens takes over for Doug Shanks. The good news for Stevens is that the 2015 roster includes 18 seniors or juniors. However, if this club is going to improve on its 2014 record, it will need players like freshman Jonathan Felicie, who helped American Heritage High School (Miramar, Florida) win a state championship in 2012, and fellow Sunshine State freshman Juan Casanova to boost production. Southern welcomes back junior catcher Jose De La Torre (.330 batting average with five homers in 2014), and senior righthander Santos Saldivar, who led the league with a 2.06 ERA. But it needs some players to take the next step and help those seniors. Freshman righty Justin Freeman is a player to watch.