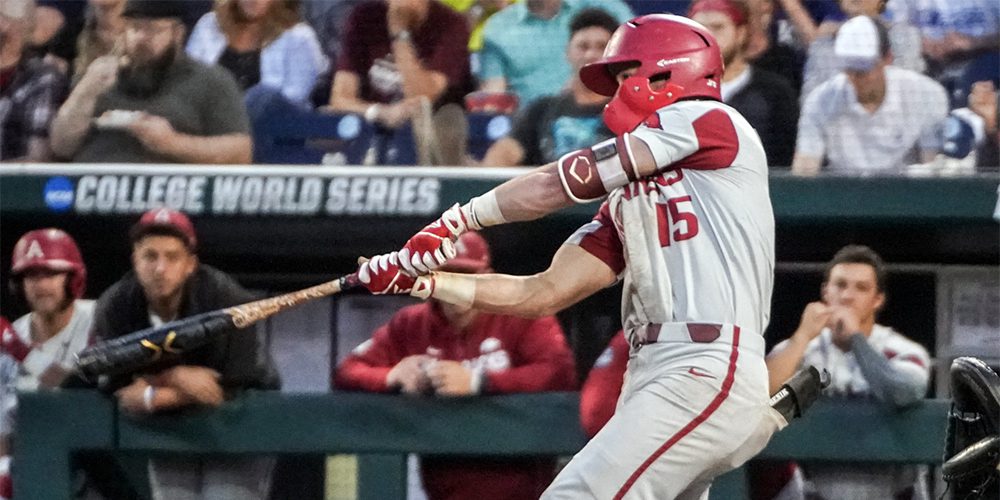 We’re still two summers away from the 2020 MLB draft class having their names called, but it’s never too early to start the ranking process.

Over the last week, we’ve taken an in-depth look at the premier 2019 college draft prospects with the release of the Top 50 pitchers, Top 50 hitters, and of course, our master list — the 2019 College Top 150 Prospects list.

Now, it’s time to look ahead yet again with an early look at the 2020 class.

The debate for the premier college prospect in the 2020 class could certainly go a couple of ways. Some might feel the urge to go with a pitching prospect like Auburn righthander Tanner Burns, or potentially even Oregon State righty Kevin Abel, who was the program’s Omaha hero a couple of months ago.

For now, we believe the top prospect for the 2020 class is a position player, and it’s a race between Arkansas infielder Casey Martin and Arizona State slugger Spencer Torkelson.

Martin might not have the overwhelming size of some other prospects on this list, but his skill set is rather unique. He can hit for power, he’s a premier defender with a strong arm, and he shows elite speed. He’s the total package, and while he played the hot corner for the Hogs in 2018, he could play shortstop or even second base in 2019. Torkelson is such a physical presence at the plate, has plus power and possesses an advanced hit tool. But unlike Martin, Torkelson still has something to prove from a positional standpoint, and he’s not the athlete Martin is at the moment.

Florida State and Florida lead the way in terms of representatives on the list with four each, while Michigan comes in with three prospects. These programs had two players on our early Top 50 list: Arizona, Arizona State, Auburn, Georgia, LSU, Mississippi State, South Carolina, Texas A&M and Vanderbilt.

That debate and more are only in the infancy stage.

The college prospect rankings are assembled by Kendall Rogers, Aaron Fitt and David Seifert. Check out the 2020 list: