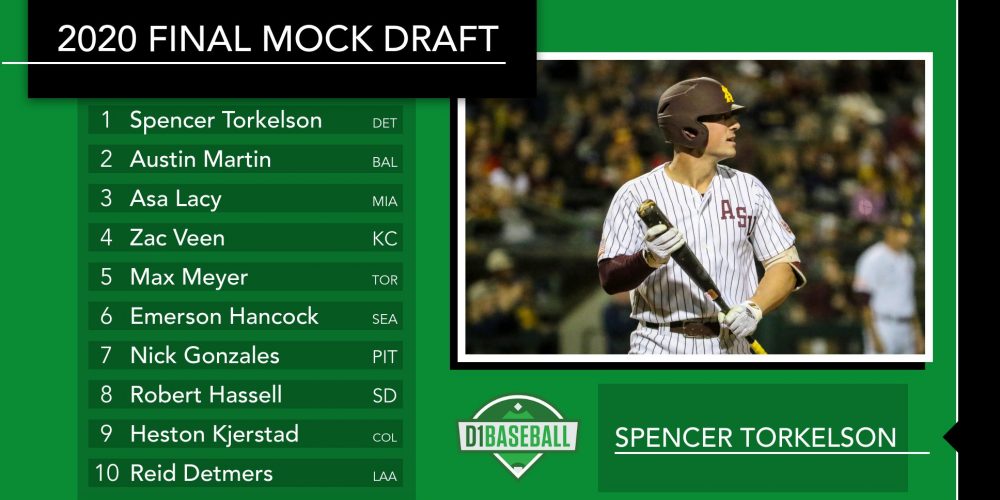 We’re less than one hour from the 2020 MLB Draft. Here’s the latest on what we’re hearing and forecasting.

2. Orioles: …or here…although rumors are circulating that the O’s may go with Lacy. In that case, Miami would select Martin at 3. PICK: Austin Martin

7. Pirates: If you can call getting to seventh overall slipping, 2B Nick Gonzales (New Mexico State) slips to Pittsburgh. PICK: Nick Gonzales

8. Padres: It sounds like San Diego really likes OF Robert Hassell (Independence HS, TN). This has been mentioned as the ceiling for OF Pete Crow-Armstrong (Harvard-Westlake HS, CA). PICK: Robert Hassell

9. Rockies: We’re pivoting to a bat for Colorado and are going with Kjerstad. PICK: Heston Kjerstad

12. Reds: Last mock we said C Patrick Bailey (North Carolina State) would be an option if he made it this far. Well he does here. PICK: Patrick Bailey

13. Giants: We’ve been hearing a lot about 2B Justin Foscue (Mississippi State) going in the top 15-18 picks. PICK: Justin Foscue

14. Rangers: Texas is supposedly in on a bat. Bailey if he made it this far, but we’ll cross bat with the Rangers’ propensity for gambling on upside. PICK: Austin Hendrick

15. Phillies: The Phillies have been known to go for athletes. SS Ed Howard (Mount Carmel HS, IL) is about as athletic as they come. PICK: Ed Howard

16. Cubs: Soderstrom might not make it this far. We need to slot him in somewhere. PICK: Tyler Soderstrom

19. Mets: This spot feels like a linchpin for the back end. We considered Foscue before pushing him up further and stuck with RHP Cade Cavalli (Oklahoma). PICK: Cade Cavalli

20. Brewers: There is strong sentiment that RHP Bryce Jarvis (Duke) is going in the top 20 for a below slot deal. PICK: Bryce Jarvis

22. Nationals: He might be a tough sign considering his sophomore-eligible status and potential as a top 10 pick next year, but RHP Cole Wilcox (Georgia) to Washington feels comfortable. PICK: Cole Wilcox

23. Indians: There have been a lot of rumors about RHP Tanner Witt (Episcopal HS, TX) going in the first round and Cleveland would be a fitting landing spot. PICK: Tanner Witt

26. Athletics: We said last time that C Austin Wells (Arizona) could go in the teens if you think he stays at catcher. If you don’t, he could slide. That would be a nice bat for Oakland. PICK: Austin Wells

27. Twins: Minnesota doesn’t have much money to play with so look for a high floor guy. That could be SS Nick Loftin (Baylor). PICK: Nick Loftin

28. Yankees: There was some chatter about C Dillon Dingler (Ohio State) going in the top 20. We’re sticking with the Bronx as his landing spot. PICK: Dillon Dingler

29. Dodgers: The real question here is just who slides this far? Or does Los Angeles go a little off the board? RHP Clayton Beeter (Texas Tech) has nasty stuff and could get to the Major Leagues in shorter order as a reliever if 2020 has a season. PICK: Clayton Beeter