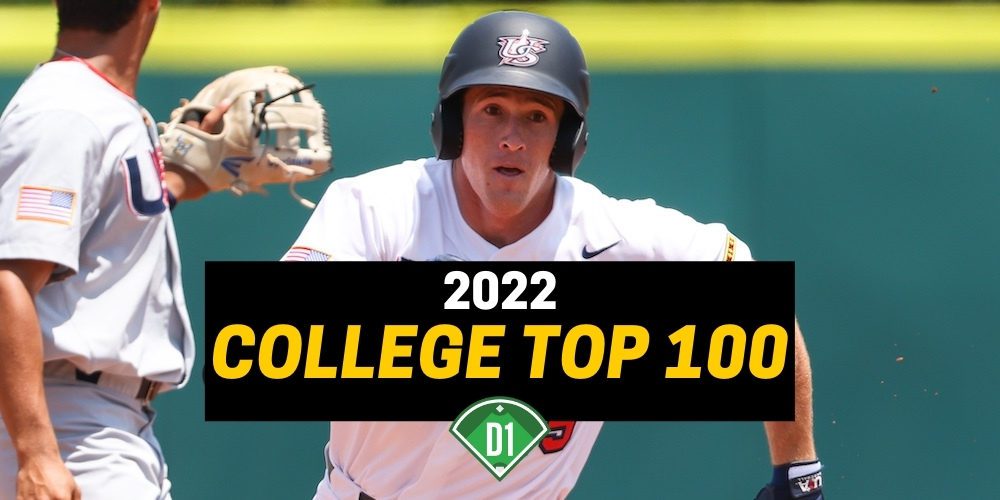 A strong group of college position players lead the way for the 2022 MLB Draft, including three of the top 12 who will likely be sophomore eligible by age if the dates of the draft remain during the MLB All-Star break in July.

The leader of this trio and our No. 1 overall prospect is Jacob Berry (LSU), who slashed .352/.439/.676 as a true freshman at Arizona last spring. Berry also raked his way through the USA Collegiate National Team’s summer schedule with a .387/475/.871 slash, showing a polished approach with big-time power from both sides of the plate. A switch-hitter, Berry is similar to Bobby Bonilla in that he’s a threat to hit for both average and power from both sides of the plate. Spencer Torkelson went 1-1 as a first baseman in 2020 and with another big season at the plate, Berry could as well.

Directly behind Berry by the slimmest of margins is another switch-hitter, Brooks Lee (Cal Poly). Lee is a throwback ballplayer who further endears scouts with his makeup, passion and instincts for the game, in addition to his elite bat-to-ball skills from both sides of the plate, but especially the left side.

At No. 3 overall is another highly talented bat in Red Raider Jace Jung (Texas Tech). The younger brother of the No. 8 overall pick in the 2019 draft (Josh), Jace gives proof to the theory that hitting is genetic. The left-handed slugging infielder pounded 21 home runs last season while walking (49) more than he struck out (45).

The first pitcher in the Top 100 occupies the No. 4 spot with left-hander Reggie Crawford (UConn). The Huskies phenom is a two-way talent, boasting big power potential at the plate, but after flashing triple-digit heat this summer in the Cape Cod League and for Team USA CNT he’s now viewed potential front of the rotation starter. Athletic and large-framed at 6-foot-4, 235 pounds, Crawford pitched just 7.2 innings (with 17 strikeouts) for UConn this spring, and this summer he showed electric stuff for the CNT, striking out nine in five innings, while allowing just one hit. He throws loose and easy left-handed cheddar from a three-quarter slot, and there’s more in the tank. It’s also the high-spin heat (2500-2600+ rpm) that clubs now drool for. He further separates himself by consistently landing a low-80s breaking ball. It’s a profile that could be considered at 1-1 for the 2022 draft.

After a big spring for the Hokies (.345/.415/.621) and an impressive summer with the USA CNT, Gavin Cross (Virginia Tech) sits at No. 5. The left-handed slugger went from a well-known underclassman by area scouts to the shortlist of top 2022 prospects by scouting directors throughout the industry. At 6-foot-3, 210 pounds, Cross combines power, speed and fast-twitch. He doesn’t get cheated in the box and is up there to crush the baseball. He’s also a solid defender in center field, but profiles better to right field with plus arm strength. With five tools his lefthanded bat is his ticket to strong consideration for selection in the top half of the first round next summer.

Overall, Arkansas leads the way with three potential first-round picks (Moore, Peyton Pallette, Cayden Wallace) and the SEC once again dominates the Top 100 with 36 prospects, including 13 of the top 25. The ACC places second with 20 of the Top 100 and the Big 12 third with 15.

The top mid-major prospects include No. 8 Chase DeLauter (James Madison), No. 37 Eric Brown (Coastal Carolina), and No. 39 Zach Neto (Campbell).

[Make sure to check out in-depth scouting reports on the Top 10 players, here.]