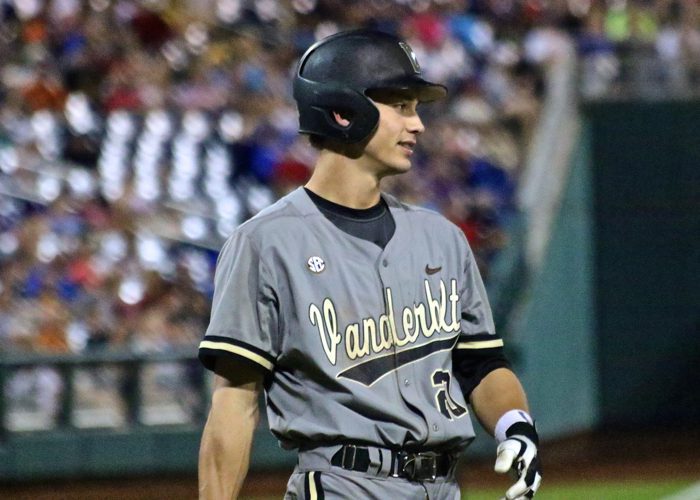 Vanderbilt's Bryan Reynolds had a strong summer at the Cape Cod League.

To no one’s surprise, the Cape Cod League trotted out another overwhelming army of talented players in 2015. By our count, 424 different players took at least one at-bat or made an appearance on the mound in the Cape Cod League during the summer of 2015. That’s up from last year and it’s a number that will likely continue to rise in 2016. Why point this out? Increasingly so, the rosters of the 10 teams on the Cape are not so much a single collection of players, but instead are comprised of wave after wave of players.

The minimum requirement for hitters to be eligible for our list is for players to have participated in at least 20 games on the Cape. For pitchers, they had to have crossed a five appearance or 13 inning threshold. For perspective, 59 different pitchers and 89 different position players that played on the Cape in 2015 were not eligible for consideration.

Aside from explaining the process behind our list and providing further explanation as to why familiar star names like Zack Burdi, Bryson Brigman, Zack Collins, Robert Tyler, and many, many others are absent, understanding this revolving door of players is important to understanding what Cape Cod League baseball presently is. Scouts are often contending with shorter windows to evaluate some of the best players, but at the same time it’s giving us a look at more players playing on the Cape than ever before.

2015 was not a banner year in terms of top shelf, future superstar talent on the Cape. But, in terms of depth, the Cape has never been better than it was this summer. Particularly since a number of players that also suited up for the USA Baseball Collegiate National Team returned to action in mid-July after their tour, we saw a number of talented waves of player come through the league this year.

If you look beyond the slam dunk first round type of talent, the Cape League was simply brimming with players that teams could easily envision themselves taking in the top three to four round of next year’s draft. Kyle Lewis, Bryan Reynolds, Nick Senzel, as well as arms look like excellent bets to go in the that range, as do other hitters, but the pitching on the Cape came much more in the form of wildcard varieties. Matt Krook and Jordan Sheffield have monstrous talent, but did not dominate the league from a statistical standpoint. Arms like Dakota Hudson and Corbin Burnes broke out in a big way, but also still have something to proven in terms of consistency next spring.

The list of players who could further blossom into potential first round selections is a longer one than we usually see from a Cape League crop. The proven, college star commodities might have been in somewhat short supply, but the upside and depth still deserved to be marveled at.

Now, let’s taken a closer look at the top 50 draft eligible prospects from the Cape League in the 2016 class. We begin with part one, our top 25. We’ll continue Wednesday with 26-50. We’ll also continue our in-depth look at the Cape later this week with a breakdown of the league’s top 2017 prospects, as well as a “best of the rest” list, featuring even more talented names to keep a close eye on.

If you talk to any scout who watched Lewis perform this summer on the Cape, the speech you’ll here from them will be very similar. You’ll hear things like “you don’t find college players that look like this” or varying ways of saying that Lewis looked more like a big leaguer than any player in the league.

With the current structure of the draft, athletes like Lewis tend to be hot commodities out of high school and typically don’t end up in the college ranks. But, Lewis has been somewhat of a late bloomer athletically, leaning out and gaining tremendous athleticism and strength in his last couple seasons. Now standing at 6-foot-4, 205 pounds, Lewis is a baseball adonis and drew the eyes of scouts before his even swung the bat for Orleans this summer. While he is technically a fringe runner going home to first, Lewis runs very well under way and gets excellent jumps in the outfield. His arm also plays well in a future right field profile.

All of that athleticism, wiry strength, long limbs, and projection are all well and good but the ultimate selling point with the Mercer star is his right-handed bat. It starts before the game, as Lewis takes a very measured and professional batting practice round. He works the opposite field gap with line drives and you’ll rarely see him try to do too much with his swing. This works tremendously in his favor during game action, where he lets his plus hand speed and ability to let the ball track deep do all the work.

One particular standout moment from Lewis came against flamethrower Bryce Montes de Oca, when the righty slugger took a 97 mph fastball on the outside part of the plate and deposited a missile over the righty field fence that was both gone in an eye blink and a no doubt shot off the bat. Few players have effortless power to the opposite field, and Lewis has just that. But, it’s that hand speed and the trust he has to let pitches track that allow him to be this dangerous. He covers the plate exceptionally well on soft stuff away, but has the quickness to beat pitchers inside. Will Lewis strike out at the next level? Yes, as he did go down on strikes 29 times in 150 at-bats, going along with his seven home runs and .300 average. But, this will happen more because of his willingness to go deep into counts and spit on pitcher’s pitches.

When Lewis was locked in early this summer, his at-bats wowed scouts, as he spoiled pitches better than any hitter in the league and could wait out at-bats until he could do manage. It was an “it” factor that you rarely see with hitters at this level. Lewis cooled down the stretch, but his huge summer coupled with a monster spring at Mercer in 2015 position him as a potential top ten overall pick once the draft rolls around.

The Cape is typically a pitching dominated league, but in 2015 it was very much about the position players. And, few position players come as ready made for the professional ranks as Vanderbilt star, Bryan Reynolds. He is one of the most complete baseball players not just in the Cape Cod League, but anywhere in college baseball. An above average runner who got outstanding jumps on the ball in his time as the Orleans center fielder, Reynolds is going to be a defensive asset at any level. He has center field range, and enough arm to get the job done.

But, despite the defensive prowess, it was truly the bat, from both sides of the dish, that had him jumping off the page to scouts. Reynolds does an excellent job of using the middle of the field, and he produced some booming shots to the gap off above average stuff. He’s also proven to be among the most disciplined hitters the league has to offer, if not the most disciplined. He struck out 14 times in 81 at-bats, compared to 17 walks. Reynolds reads off-speed pitches exceptionally well, even by professional standards, and scouts believe he’s the type of hitter that will be able to advance quickly because of that.

Scouts will continue to monitor how Reynolds’ power stroke develops, but his gap to gap approach, discipline, plus speed, and defensive profile already make him a near lock for the early part of the first round next June. That feel for hitting he showed for Orleans, as well as his feel for the game make him one of the safest bets in the 2016 class.