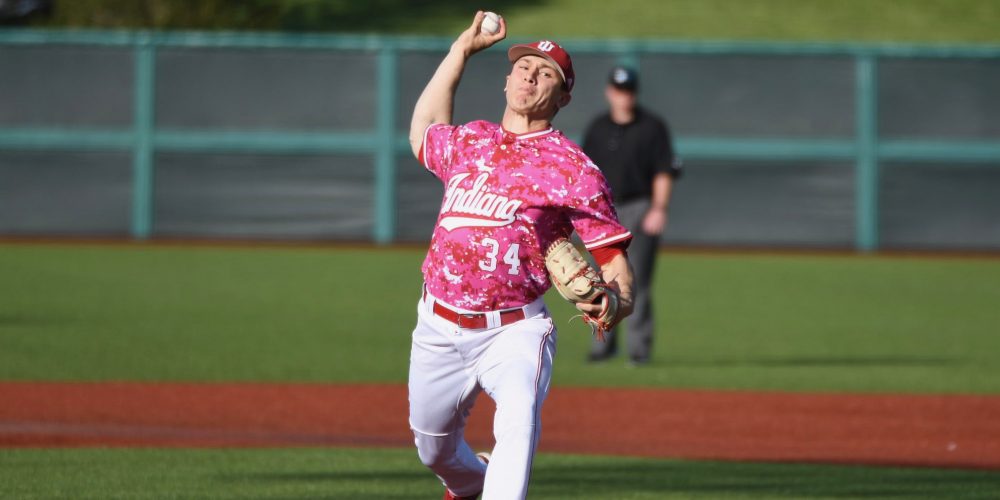 Jonathan Stiever is a big-time arm for the Hoosiers. (Aaron Fitt)

Who are college baseball’s hardest throwers? After 11 weeks of games, here’s a list of college pitchers we have seen throw at least one fastball 96 mph or better. All velocities were seen firsthand by D1 Baseball or Prep Baseball Report staff members.

Traveling to California this week, it was a chance to check out some West Coast Heat. On Thursday evening, after seven innings of Cal vs. Stanford, the Heat appeared by the name of Tanner Dodson: First pitch 95, then 94…then 96. There it was, the 31st member of this year’s Heat Sheet. Later in the inning Dodson touched 97, becoming the 17th college arm that we’ve seen touch 97 or better.  The 32nd member was spotted on Friday evening in Bloomington, Indiana. Jonathan Stiever was electric throughout his first three innings pumping several 96s against Illinois. Also spotted on Friday, Durbin Feltman pumped his normal high octane gas of 95-97, but he joined the list weeks ago. Saturday, another Horned Frog was found throwing flames. Freshman righty Caleb Sloan touched 96 during his two inning relief appearance, making him the 33rd member of the Heat Sheet.

With three more weeks remaining in the regular season, who else will join the list?