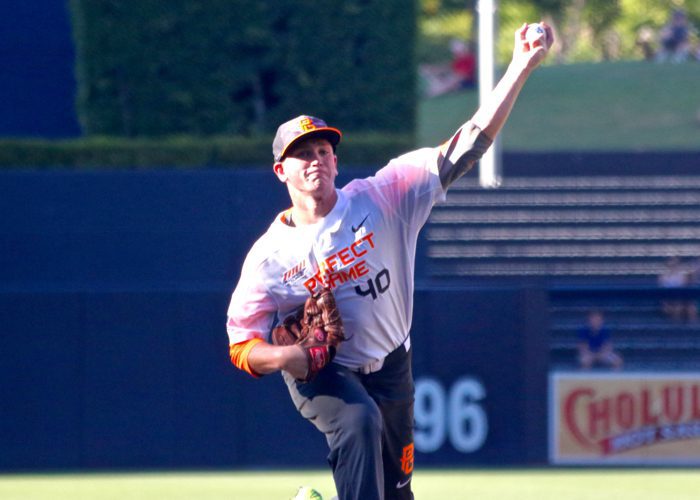 If early indications are correct, the top of the 2016 draft could be dominated by elite high school talent. It’s shaping up to be very much the year of the high school pitcher, and slowly but surely the bats have been catching up as well. While the crop looks solid on the college side, we are likely to look back on this coming June as one that was littered with outstanding players from the high school ranks.

With just under eight months to go until the big day next June, we are seeing a number of storylines develop when it comes to this high school class. From a recruiting standpoint, many powerhouse programs can simply sit and wait to see which of the elite in this class will actually make it to campus. And as we head into the winter, the scouting world is left to ponder this class as a whole and plan for things to watch closely in the spring ahead. What have we learned about this group so far? Which storylines will occupy the scouting world’s minds this winter? Let’s take a closer look at a handful, as we follow up on our early top 50 list.

Jason Groome and Riley Pint headline our list of 2016 top high school prospects, and if you’re a fan of the draft, it’s time to get used to hearing about the elite arms in this crop. As it turns out, Groome’s 91-95 mph fastball and dominant curveball, as well as Pint’s exploding 95-98 mph fastball are not at all alone at the top of this class. In fact, a number of arms could make a very strong case for top half of the first round consideration. And the name we are hearing a lot of late is towering Texas righty Forrest Whitley, a name that was absent from Jupiter rosters but very much on the tip of the tongue of scouts.

“There are a lot of guys that aren’t far behind Groome and Pint,” said one crosschecker recounting his thoughts after Jupiter. “I think those are pretty much the (top) guys for everyone, but there’s a whole bunch of high-upside arms out there. I think the kid from Texas, Forrest Whitley, really has a chance to go good. Being 6-foot-7 and the stuff he showed late in the summer, that’s a guy I could see really moving into that mix with a good spring. But there’s a lot of them. Ian Anderson is really polished. (Austin) Bergner has stood out for a long time. Matt Manning has moved up. The class is outstanding on prep pitching.”

That kind of sentiment is shared around the scouting world right now. Deep into our top 50 and beyond, there are arms that could easily be viewed by different scouting departments as potential first-round picks. As for Whitley, the 6-foot-7, hulking righty has the ability to dominate his opposition on the strength of his fastball, which tops routinely at 96 mph and can work steadily at 92-95. Whitley’s 82-85 mph slider shows the makings of being a true plus offering, and his 84-87 mph changeup shows late tumbling action. Whitley has thrown more of a true curveball in the past, but with any combination of these offerings, he shows a prototype skill set of being a front of the rotation big league starting pitcher.

One very new story to watch closely is D1Baseball’s report that highly touted outfielder Seth Beer plans to graduate high school early, and enroll at Clemson this winter, making him a college freshman a season earlier than anticipated. Obviously, if he does decide to make such a move it has a major impact on the 2016 draft class. The lefty swinging, 6-foot-3 outfielder currently ranks 20th in our high school rankings, and regained some stock after showing improvements at the plate in Jupiter.

Assuming Beer’s plan goes off without any academic hitches, his decision could also have a major impact on the college baseball landscape. Beer’s athletic skill set and dynamic lefty offensive potential could instantly make him one of the most exciting talents in college baseball. It could also give Clemson an offensive piece that could instantly change its fortunes both short and long term.

What Puerto Rico brings to the table each year is somewhat of a wildcard in the draft conversation. It’s hard to match the year Carlos Correa was in the mix, but this year’s depth is potentially difficult to rival.

Delvin Perez (8) has first-round potential written all over him, as scouts came away highly impressed this fall with the development of his bat to go with his dazzling tools at shortstop. Perez has outstanding life off his barrel from the right side, and his projectable 6-foot-3 frame has scouts believing he’ll continue to add power to his game. He’s also a plus runner with highlight reel defensive skills up the middle.

Joining Perez among the talented Puerto Ricans in this class is another big hitting shortstop, Luis Curbelo (36), who has offensive skills that potentially could rival Perez’s. Just beyond our list are two more talented shortstops, Alex Torres and Francisco Thomas, who both show the hands and offensive upside to garner top-two-round interest in June.

Evaluating recruiting classes this early, and doing so on the basis of simply looking at which programs have landed the most talented players in our rankings, is far from conclusive. But you can’t help but gaze starry eyed at the list of names that UCLA, Vanderbilt, South Carolina, Arizona State, and Florida State have racked up.

For a full breakdown of which schools have recruits in the top 50, you can visit our rankings table, but for now we’ll focus on what Florida State has done. Not only do the Seminoles have four players in our top 50, but they’ve gone big game hunting. They have the fourth and fifth ranked players in Josh Lowe and Forrest Whitley, most impressively nabbing Whitley from the state of Texas. They’ve also netted 22nd-ranked Drew Mendoza and 31st-ranked Cole Ragans. All of the aforementioned schools have gaudy lists of players, but this is the class with the most glitz and gloss at the moment. Stay tuned for far more in-depth looks at recruiting classes from across the country throughout this offseason.

You can’t look at our top 50 list and not immediately take notice of the fact that Liberty has two recruits that figure very prominently. As is the caveat with any of these recruits that rank in our top 50, whether they get to campus is of course a major question.

Alex Kirilloff (11) lands his ranking on the strength of his pure impact bat, coupled with his surprising overall athleticism for his large 6-foot-2, long frame. Arguably the owner of the best lefty power in the class, he’s a potential impact star at the next level, and of course could be a program changer if he ever landed at Liberty.

Khalil Lee (37) is as rounded a player as you’ll find this high school class, and he has wowed scouts with his compact line drive stroke from the left side. He shows above average outfield arm strength and has a highly advanced feel for the game.

This is an exceptional year for high school talent in the Midwest. Look no further than the roster the Chicago Scouts Association team put together in Jupiter, which included two stars in our top 50 rankings in Gavin Lux (23) and Ben Rortvedt (30). Both players hail from Wisconsin, and the list also includes two players from Illinois (Cooper Johnson, Tyler Fitzgerald), one from Indiana (Skylar Szynski), and one from Nebraska (Cole Stobbe). All but Szynski are position players, which again is a sneaking strength this class is beginning to boast. Johnson and Rortvedt are our two highest ranked catchers in the nation, and the fact that they both come from non-traditional parts of the country for talent says a lot.

“It’s a very good year out here,” said one scout based in the region. “There are guys who can really hit. [Gavin] Lux is as good as anyone out there. It’s going to be a fun spring with all these guys.”