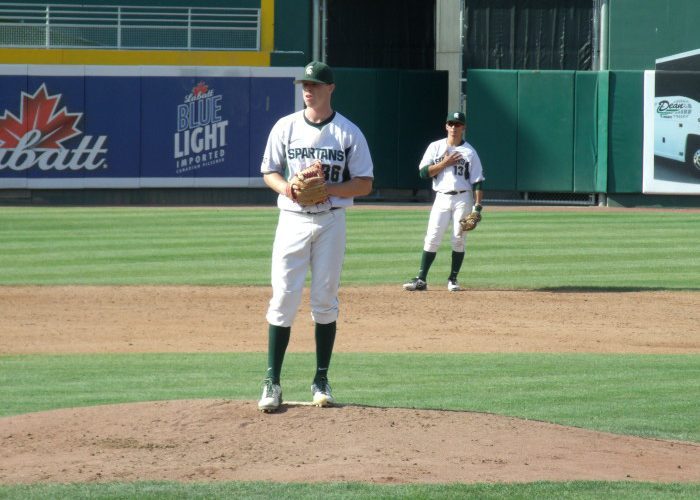 LANSING, Mich. — A program-record eight Michigan State players were selected in June’s draft, but the Spartans are seeking to reload, not to rebuild. That is the expectation of the Michigan State baseball program under Jake Boss.

Entering his eighth season guiding the Spartans, Boss has rejuvenated and transformed the program from once dwellers of the Big Ten’s basement to perennially knocking on the door of the NCAA tournament. A participant in the 2012 Palo Alto Regional, Michigan State didn’t disappear from the national scene after one year of promise, returning to the tournament conversation in two of the next three seasons. The Spartans were the first team left out of the 2013 NCAA tournament, and were one of the first four left on the outside looking in on the 2015 field of 64.

After a season where the Spartans went 34-23 and tied for third in the Big Ten with a 14-10 conference mark — a campaign deserving of high-fives and exult a decade ago — Boss and his staff of Skylar Meade and Graham Sikes have their full attention on the 2016 season, looking to get over the hump and return to a regional. After taking in Michigan State’s scout day Tuesday afternoon at Cooley Law School Stadium in downtown Lansing, it is clear the Spartans are set to have a deep pitching staff backed by a young, but athletic and dynamic lineup. Here’s a rundown.

The main attraction for the more than 40 scouts in attendance was junior lefthander Cam Vieaux. A 19th-round draft pick of the Detroit Tigers following his redshirt-sophomore season, Vieaux turned down overtures from the hometown Tigers for another season in East Lansing. Limited on the mound for an inning or two a week through the fall season, following a summer spent in the Cape Cod League, Vieaux showed why he will be atop the Spartan rotation with two strong innings in an intrasquad scrimmage.

Breezing through the opposing Michigan State hitters, Vieaux worked 89-91, comfortably cruising at 90 mph over two dozen pitches. Vieaux showed a presence on the mound and worked with good tempo while pitching with good fastball command, spotting better arm-side, especially to lefthanded hitters. Vieaux’s out-pitch is a slider which ran 80-81 mph on the afternoon, and can be buried back-leg to righthanders after pounding the outside corner. Vieaux did a good job staying on top of his slider, as in the past he would run into trouble maintaining his release and having the pitch flatten out. Though he rarely used it in the spring, Vieaux flashed an 11-5 curve at 79 mph that wasn’t just show-me curve, possessing good spin.

Listed at 6-foot-4, 191 pounds in last season’s program, Vieaux appears noticeably thicker in the chest, and presents a pro-ready frame. The added bulk does not inhibit Vieaux from maintaining fluidity through his core and in his arm action, and Vieaux showed a better job of finishing pitches from his three-quarters release point and staying firm on his back leg. Vieaux brings a bulldog mentality to the mound, and after a season where he carried a 3.46 ERA over 90 1/3 innings, struck out 71 against 32 walks, he looks to take the next step in being a top-10-round draft pick and a leading Friday night ace in the Big Ten.

Michigan State struck gold last season with the arrival of third baseman Mark Weist, a transfer from Spring Arbor Community College. Weist batted .346 with 19 doubles and six home runs, adding 11 stolen bases as he provided the Spartans with an offensive force at the hot corner, a position where Michigan State struggled to get production the prior two seasons.

The hope is now for Jordan Zimmerman to provide the same lightning in a bottle. A transfer from Mesa (Ariz.) CC, Zimmerman is expected to be the Spartan second baseman. Tuesday afternoon he showed why the MSU staff has high expectations for the newcomer.

During his batting practice, Zimmerman showed good raw power, pulling a handful of balls over the left-field fence. At 6-foot, 200 pounds, Zimmerman has a wide-shouldered, triangular frame and a long torso packed with lean muscle. Zimmerman’s upper-body strength allows him to possess good bat speed, and although his swing is slightly long, it whips through the strike zone. When Zimmerman connects, as he did in the scrimmage for a stand-up triple off the center-field wall, the ball can travel, but Zimmerman’s bat-to-ball skills are a work in progress.

In the field Zimmerman is a second baseman who possess above-average arm strength, but there isn’t fluidity and natural actions in his transfer. From an over-the-top release, the arm strength will make up for the slight hitch in his transfer, which is not a cause for concern at this level. Interestingly, Zimmerman’s release is quicker and his actions are smoother when he’s on the move, especially back-handed, where he shows good agility and range.

On his triple, Zimmerman ran the bases well. He ran the 60-yard dash in the 6.9-second range, but he has plenty of coordination and lateral quickness.

Freshmen for the future

The Michigan State staff raved about freshmen Royce Ando and Marty Bechina, two rookies who should see the bulk of the action on the left side of the infield and showed well in front of the scouts.

Ando comes from Mississauga, Ontario, and is a high-level Division I shortstop. Smooth and graceful, Ando shows a natural feel for the position with easy transfers, stays on the balls of his feet and moves around the bag with comfort with quickness. His arm is average for a college shortstop right now, but it could tick up as he enters the strength and conditioning program. Ando has a lean, loose frame that should allow him to add a few pounds without losing athleticism, though he has plenty to spare.

Bechina is a player coaches would call a dirtbag, a gym rat; Boss loves the intangibles he possesses and speaks of his natural leadership. He should also be a pretty good player. Bechina hit a home run in the scrimmage and the Spartan coaches speak to an advanced feel for hitting, suggesting that he has the potential to be an impact player. Bechina comes from Chicagoland’s St. Rita High School, where he was a standout shortstop, allowing him to move to third base without concern.

CW: After the losses of seniors Ryan Krill (first base), Blaise Salter (DH) and Mark Weist (third base) and junior Cam Gibson (left fielder), all selected in the draft, it appears there will be a different feel to this team — maybe not as power-packed at the plate, but more athletic and youthful. Will this be a team where the pitching needs to carry the way for the first few weeks as new guys settle in?

JB: It’s going to be a different team than the last few years, a little faster, a little more athletic. I think we have some guys that are going to be able to hit. I think we’re deeper than we’ve been positional wise, but there are a lot of unknowns with that where you don’t know until you get out and start playing.

CW: How important is this practice season to guys like Brandon Hughes or Alex Troop, who were factors last year, but now may need to take on a bigger role with the loss of Gibson, Krill, Salter and company?

JB: The guys that played last year as freshmen (Hughes, Troop, Chad Roskelly), it’s time to take the next step both on the field and in a leadership role. Those guys are good kids, they’ve worked their tails off, great in the dugout, great in the locker room. And now they have an opportunity, because we were so senior-laden, they have an opportunity to do a little more as far as leadership is concerned. I think they’re made for it, their personalities lend itself to it, and it’s going to be fun to watch.

CW: When you’re in a fall with as many new faces as you have, is there any change in how you approach the practice season?

You go back to when last year’s seniors were freshmen and sophomores, there’s a lot more teaching going on at that point, it’s different for us as coaches. Last year we were maybe grooming guys for backup roles, and our seniors had been through a lot, but there’s a lot of new faces. Graham (Sikes) and I were speaking yesterday, you feel like there is so much to get done and such little time to do it, but it’s important to take a step back and realize we don’t play our first game until Feb. 16.

We have a long way to go, a lot of work to do, but we have good kids. Graham and Skylar (Meade) have done a tremendous job on the road recruiting, identifying talent, but more importantly finding the type of person we want in our program.

CW: After the 2012 regional the program has twice been close, but fallen short of returning to the NCAA tournament. How is it managing the program now with the elevated expectations where the 2015 season is seen as not good enough?

We talked about it in our first meeting, the fact that our guys have taken the program to where it’s not good enough. Third place and being one of the last out, 10 years ago people would have done cartwheels, and still people in town and around campus will compliment on a good year, but in our locker room we know it’s not good enough.

I think it’s a testament to our players and the expectations they have brought to the program. We talk about what an honor it is to put the Green and White on, you have a responsibility to keep moving the program forward. We have guys like (football) Coach Dantonio and (basketball) Coach Izzo to learn from, and their success is something we talk about a lot, what we want for our program.