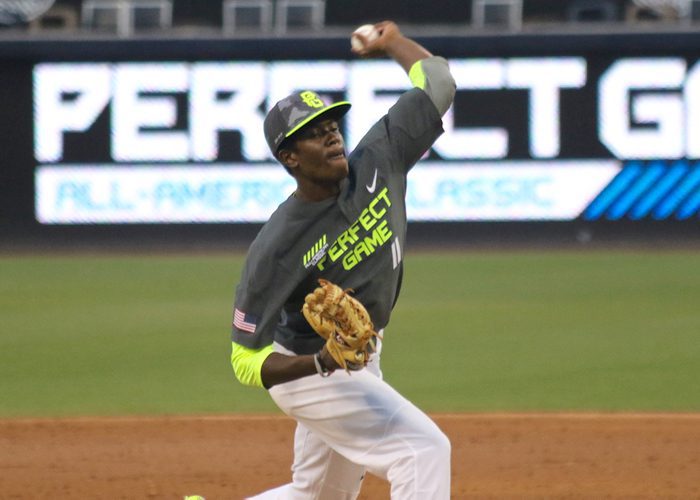 SAN DIEGO — Dion Henderson had a true once-in-a-lifetime experience at the Perfect Game All-American Classic. One he’ll never forget. One his friends and family back in his hometown of Dearborn, Mich., will never let him forget.

“It was great, especially playing against this talent and being around all these guys,” Henderson said. “You get to meet them. You hear about them, but you get to meet them and get close to them. It’s just a great experience.”

But it was what Henderson did on the field that will be the topic of conversation for many years to come. The 6-foot-4, 200-pound lefty took over on the mound in the seventh inning with the West squad trailing 2-1. The West had just scored its first run of the game, so Henderson was tasked with producing a shutdown inning and giving the offense a chance to build on its previous success.

It wasn’t that Henderson accomplished his goal. It’s how he went about creating one of the iconic moments in the history of the event. Sitting 89-91 mph and touching 92 with his fastball, Henderson attacked the strike zone. He mixed his pitches well, tossing in a 72-73 changeup with good late life and using an even slower big-breaking curve at 64-67 mph.

“I try to implement the fastball. It’s 89-91,” Henderson said. “Then I come back with the changeup because it’s a lot different in miles per hour. The curveball, I try to throw that as my strikeout pitch. I try to bury a curveball or paint a changeup. But mostly, it’s just location. I try to locate every pitch I throw.”

Henderson did exactly that against the righthanded power-hitting Max Guzman. The Florida International commit waved at a 73 mph changeup that started at the bottom of the strike zone and dropped away from Guzman’s big bat.