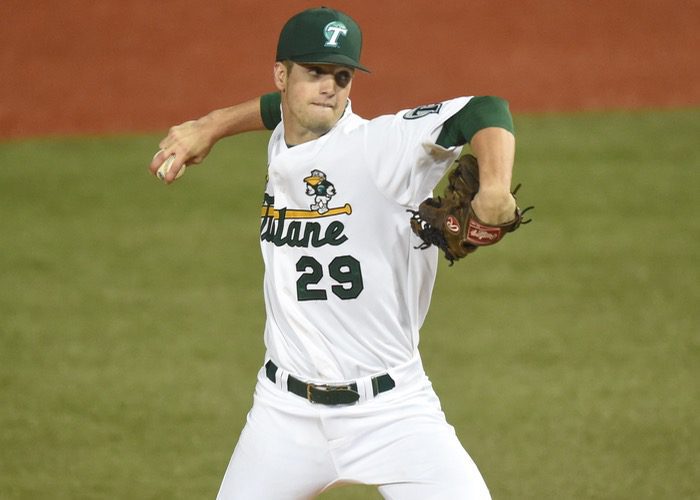 For those of us still lamenting the departure of Thomas Eshelman from college baseball, maybe Emerson Gibbs can provide some temporary relief.

Eshelman, of course, was a national treasure — the Patron Saint of Strike-Throwers. He opened his Cal State Fullerton career with 63.1 consecutive innings of walk-free ball, and then he began his sophomore season with 63 innings before issuing his first walk.

Gibbs, a rising senior righthander for Tulane, has turned in a similar performance for the Baltimore Redbirds in the Cal Ripken Collegiate League this summer. In 50 Ripken League innings (42 in the regular season, seven in the playoffs and one in the all-star game), Gibbs has yet to issue a walk. He is 5-1, 1.08 with 35 strikeouts, but his walk-free streak stands as one of the most impressive statistical accomplishments anywhere in summer baseball this year. He won’t get a chance to match Eshelman’s 63.1-inning streak, but he’ll make one more start this weekend in the Ripken League championship series against Bethesda.

“The wonderful thing about Emerson is I think everybody wants to play defense behind him, because there is no one that works faster, no one that throws more strikes,” Redbirds coach Larry Sheets said. “He’s not a strikeout guy, but the ball’s in play and the defense is ready to go. This year he pitched an hour and 45-minute nine-inning game.”

Gibbs certainly isn’t the prospect that Eshelman is, but he’s become a valuable college pitcher. After posting a 6.02 ERA over his first two seasons at Tulane, Gibbs figured it out as a junior this spring, going 5-3, 2.73 in 79 innings. His stuff is far from overpowering, but he locates his 88-90 sinking fastball very well to both sides of the plate, and he mixes in a solid 77-80 curveball with sharp 11-to-5 break. He features an occasional changeup too, but the fastball and curve are his bread and butter. 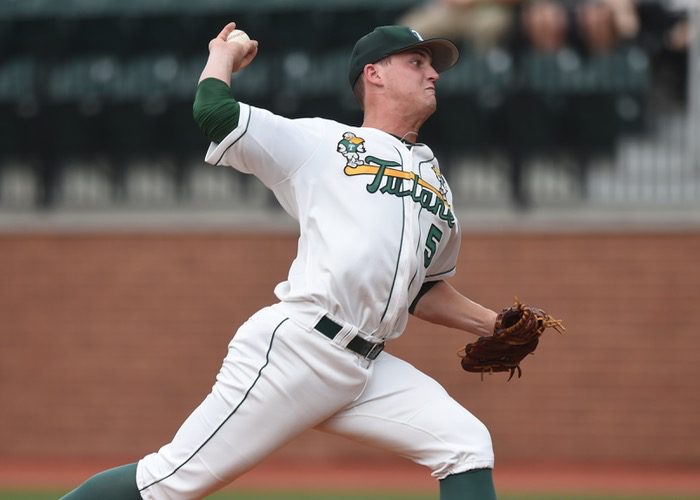 Another Tulane rising senior anchors Bethesda’s staff. Tim Yandel, a 6-foot-2, 200-pound righty, ranked among the Ripken League leaders in wins (four), ERA (1.32) and strikeouts (38) during the regular season. Like Gibbs, he pitched sparingly in his first two seasons but turned a corner this spring, splitting time between starting and relieving and posting a 4.31 ERA in 56.1 innings. Like Gibbs, he doesn’t have huge stuff, but he has shown the ability to get hitters out with an 88-90 fastball with good tail, a fringy mid-70s curveball and a changeup, according to one scout. He also provides a bit of two-way value, hitting .253 with a pair of homers and 22 RBIs in 83 at-bats.

Neither Gibbs nor Yandel stands out as a marquee prospect, but the pair has a chance to help Tulane with a lot of games next year as experienced complementary pieces alongside talented cornerstone pieces like Stephen Alemais and Jake Rogers (a Cape Cod League all-star).

As usual, the Redbirds and Big Train were the class of the Ripken League during the regular season, posting matching 29-11 regular-season records to win their respective divisions, then winning their first playoff series to set up a best-of-three finals showdown that begins tonight. But when it comes to prospects, the Redbirds really stand out above the pack.