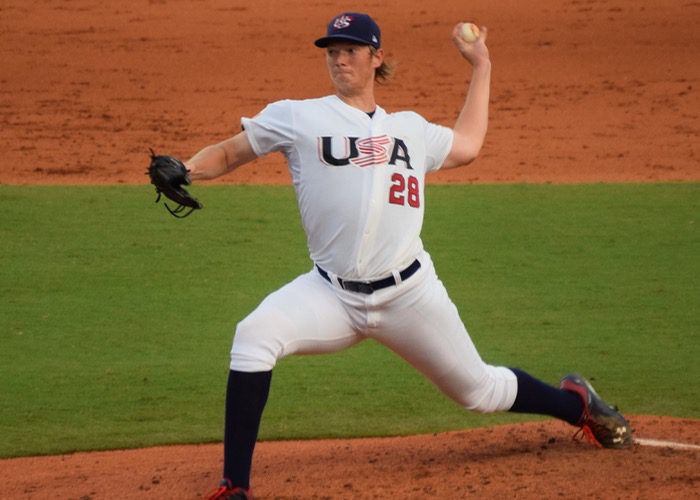 The USA Baseball Collegiate National Team stood out this summer for a strong crop of outfielders and a solid collection of power arms, but scouts were largely underwhelmed by the group of infielders. Still, the 30 players who saw action for Team USA — including the 23 players below who will be eligible for the 2016 draft — all have top-five-rounds potential, and a dozen or so of them could play themselves into first-round consideration with strong performances next spring.

The list below is based on numerous conversations with scouts and Team USA coaches, as well as my own observations from this summer and spring. Performance with the national team was certainly a significant factor, but this list is not based exclusively on how the players look this summer. We are attempting to forecast how we think this group of players will fare in the 2016 draft, and evaluations from the spring play into that calculus, particularly since the 17-game Team USA schedule represents a small sample size.

Puk is the safest bet of any Team USA player to be drafted among the top 10 picks in 2016, and the only obvious candidate for the No. 1 overall pick. Listed at 6-foot-7, 225 pounds, Puk made big strides learning to repeat his delivery and harness his tantalizing potential as a sophomore this spring. After a slow start, Puk came on strong down the stretch, holding 94-96 mph velocity deep into starts and touching 97 — from the left side. His fastball jumps on hitters because of the incredible extension in his long-levered delivery, which makes him even tougher on lefthanded hitters. At his best in the spring, he showed feel for a three-quarters slider in the 81-83 range that projects as at least an average pitch, and he improved his 86-88 changeup against righthanded hitters as the spring progressed.

But Puk struggled with his feel for both of his secondary pitches this summer and relied overwhelmingly upon his fastball, which ranged mostly from 91-94 and topped out at 95. Scouts thought his breaking ball and slider were both below-average in the limited looks they got at him this summer, but both pitches are in there, as he showed in late April and May. Even though he wasn’t his best this summer, Puk still posted a 2.25 ERA with nine strikeouts and two walks in 12 innings over four appearances. And his best days are ahead of him.