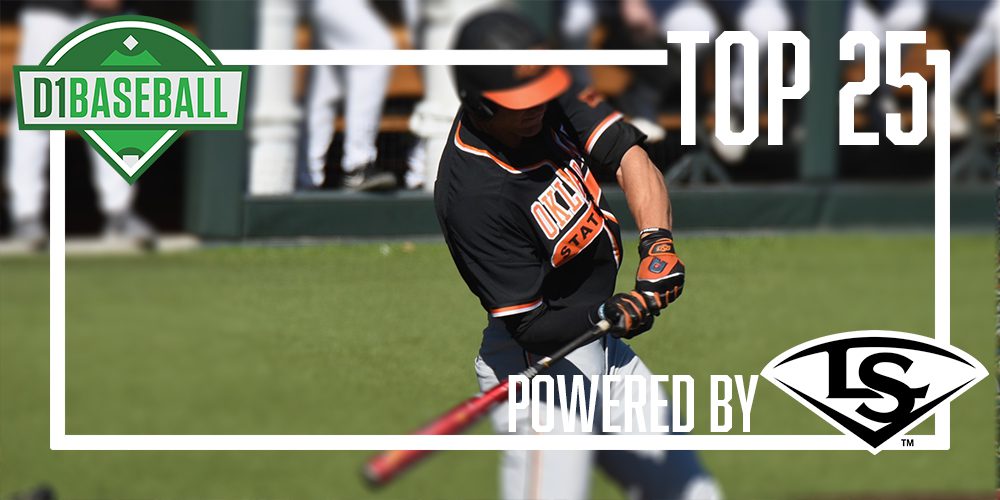 UCLA remains No. 1 in the D1Baseball Top 25 rankings, powered by Louisville Slugger. The Bruins won a road series at crosstown rival Southern California to improve to 20-5 overall. Fellow Pac-12 power Stanford moves up to No. 2 after sweeping Washington State, setting up a No. 1 vs. No. 2 showdown this weekend at Sunken Diamond.

The Pac-12 occupies four of the top seven spots in the rankings, after Oregon State swept Washington and climbed one spot to No. 6, while Arizona State swept rival Arizona to move up two places to No. 7.

NC State climbs two spots to No. 3 after taking two of three from Virginia to improve to 27-2 on the season. Georgia remains No. 4 after winning a road series at Kentucky, and Vanderbilt returns to the top five with a series win against in-state rival Tennessee.

Mississippi State falls six spots to No. 8 after dropping a home series to LSU, which jumps four places to No. 13. Texas A&M and Louisville round out the top 10.

East Carolina ran its winning streak to nine games and jumps three spots to No. 11. The other big upward mover is Ole Miss, which jumps six places to No. 18 after winning a big road series at Arkansas. The Hogs slid six spots to No. 14.