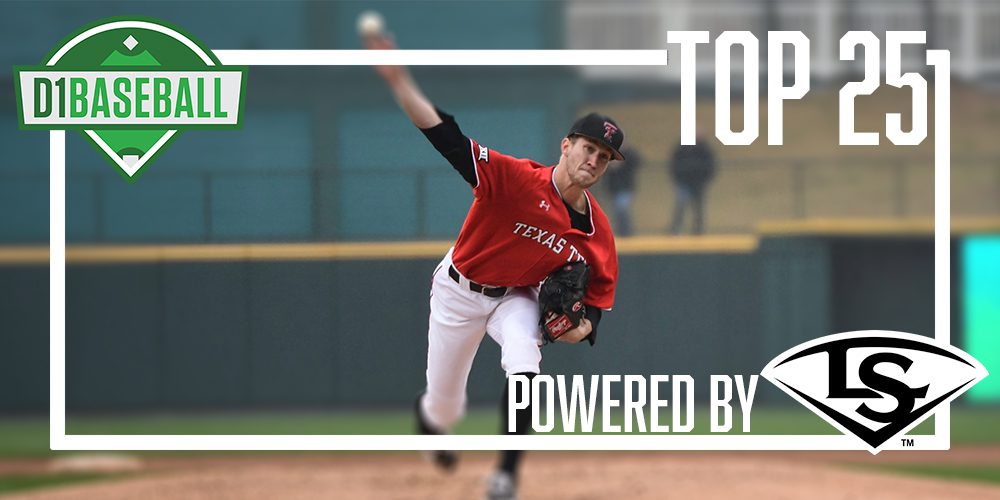 After another perfect week, UCLA is No. 1 in the D1Baseball Top 25, powered by Louisville Slugger, for the seventh week in a row.

The Bruins followed a midweek win over Cal State Fullerton with a Pac-12 Conference sweep of Utah, and they remain the only team in Division I that has yet to post a losing weekend. UCLA also has four series wins against teams currently ranked in the top 10 — Stanford, Oregon State, Georgia Tech and East Carolina — with two of those four series wins on the road.

The Pac-12 continues to occupy the top three spots in the rankings, with the Cardinal and Beavers swapping spots after Oregon State lost a pair of midweek games against Nevada, while Stanford posted a 4-1 week.

The SEC occupies the next three spots in the rankings. Vanderbilt moves up a spot to No. 4 after sweeping Auburn, and Arkansas jumps three places to No. 5 after sweeping Tennessee. The Tigers and Volunteers both dropped out of the rankings. Mississippi State moves up three spots to No. 6 after a midweek win over rival Ole Miss and a three-game sweep of Georgia. Losing the battle of the Bulldogs sent Georgia from No. 4 to No. 9.

ACC teams check in at No. 7 and No. 8. Louisville holds steady at No. 7 after pummeling Alabama A&M in a break from conference action, while Georgia Tech climbs three spots after beating Georgia midweek and taking its series against Clemson. East Carolina climbs two spots to No. 10, after a 4-1 week highlighted by a series win against Tulane.

Texas Tech makes the week’s biggest jump, up seven spots to No. 11 after sweeping Oklahoma State, which slides out of the rankings.

In spite of the midweek loss to Mississippi State, Ole Miss also makes a big move, up six spots to No. 13 after sweeping Texas A&M. The Aggies tumble eight places to No. 14. Baylor climbs five rungs to No. 16 following an emphatic sweep of TCU, and Indiana moves up four places to No. 19 after a series win over Minnesota.

Three teams enter the rankings this week, replacing Tennessee, Oklahoma State and Auburn. Florida State returns to the Top 25 after a 4-1 week that included its third straight series win. Beating Wake Forest improved the Seminoles to 14-10 in the ACC.

Missouri rejoins the rankings after a one-week absence thanks to a sweep of South Carolina. And UC Irvine returns after taking two of three on the road at Cal State Fullerton.