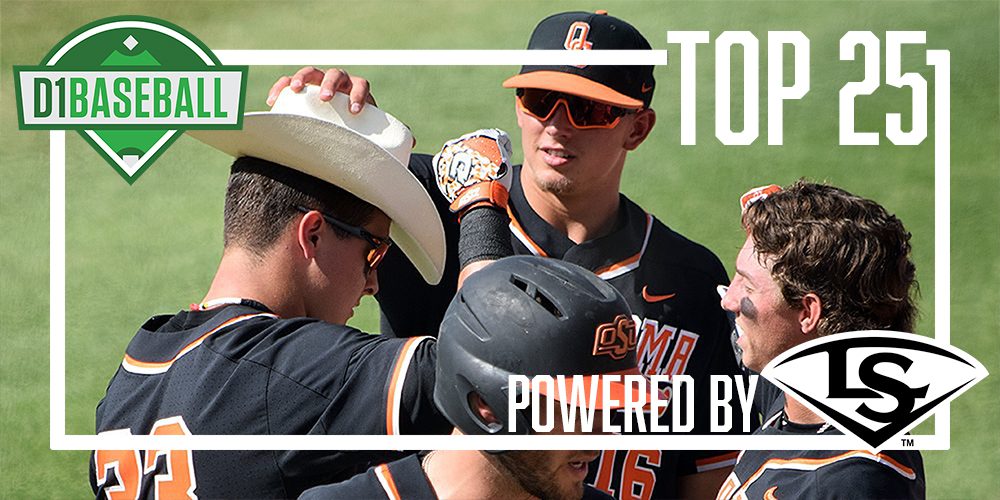 After yet another terrific week, UCLA remains No. 1 in the D1Baseball Top 25 Rankings, powered by Louisville Slugger, for the eighth week in a row.

The Bruins still have not lost a weekend series all season, and they remained undefeated in midweek games after beating Pepperdine. They won a Pac-12 Conference road series over Arizona State, beating the Devils in the series opener before delivering on offensive onslaught in the second game. Arizona State was ranked before losing the series, and UCLA also has series wins over Stanford, East Carolina, Georgia Tech and Oregon State, all of whom are among the top 12 in this week’s rankings.

Oregon State had been among the nation’s top teams for most of the season but lost four straight games last week, dropping the Beavers from No. 3 to No. 12. The big beneficiary was Oklahoma State, which has bounced in and out of the rankings this season. The Cowboys shocked the college baseball world by sweeping Oregon State on the road to jump back in at No. 18. (Oregon State also dropped a midweek game to Gonzaga.)

The SEC has eight teams in the rankings, with No. 3 Vanderbilt, No. 4 Arkansas and No. 5 Mississippi State leading the charge, followed by No. 8 Georgia, No. 11 Ole Miss, No. 15 LSU, No. 17 Texas A&M and No. 21 Missouri. The ACC has six teams in the rankings, led by No. 6 Louisville and No. 7 Georgia Tech. North Carolina, NC State, Miami and Florida State also are ranked, with the Hurricanes moving into the Top 20.

Texas Tech notched yet another Big 12 series win over Oklahoma, extending its conference winning streak to eight games and pushing the Red Raiders into the Top 10. Baylor improves two spots to No. 14 after winning its Big 12 series against Kansas State, while West Virginia drops from No. 17 to No. 22 after losing to TCU.

Oklahoma State led three teams that moved into the new Top 25, with the Big Ten’s Iowa and Illinois coming in at the back of the list. Iowa won two of three over UC Irvine and now has series wins over Irvine, Nebraska, Illinois and Oklahoma State. The Illini won a conference series over Indiana after a quality midweek win over Indiana State.