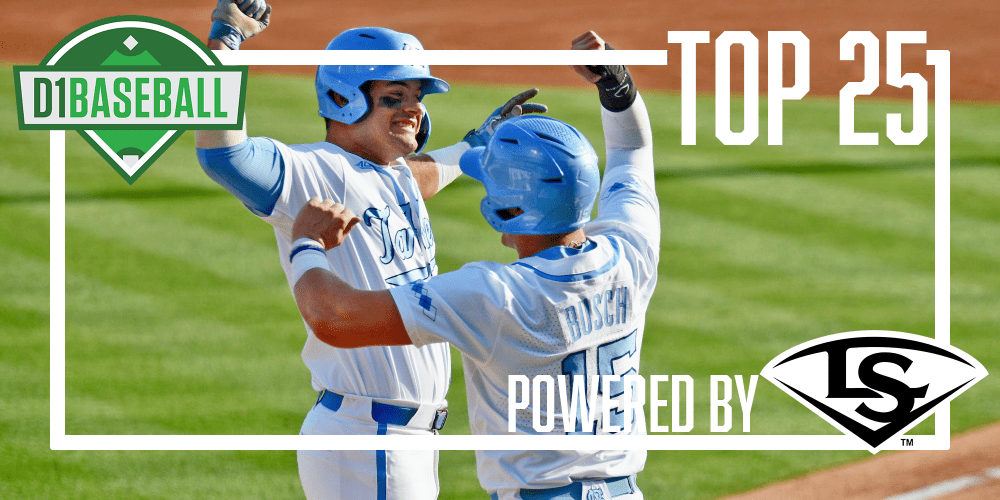 North Carolina moves up after winning the ACC tournament, and UCLA remains No. 1 in the D1Baseball Top 25, powered by Louisville Slugger

Whatever the postseason might hold, UCLA put together a remarkable regular season and finishes it ranked No. 1 in the D1Baseball Top 25, powered by Louisville Slugger, for the 11th week in a row.

The Bruins clinched the Pac-12 Conference title and extended their winning streak to 10 games with a road sweep of Oregon. They not only won every weekend series this spring — a program first — but also went undefeated in midweek play. They head into regionals as the No. 1 national seed and hosts of the Los Angeles Regional.

Big 12 powers Texas Tech and Oklahoma State move up two spots apiece to Nos. 8 and 9, matching their national seeds. East Carolina falls two spots to No. 10 after a 1-2 showing in the American Athletic Conference tournament.

Four teams that made strong runs in their conference tournaments make significant moves up the rankings, led by North Carolina. The Tar Heels went 4-0 to win the ACC championship and move up eight spots to No. 15. Ole Miss also jumps up eight spots after going 4-2 in the SEC tournament, losing in the championship game to Vanderbilt. West Virginia moves up six spots, and LSU moves up four.

Indiana State and California break into the rankings as the regular season ends. The Sycamores check in at No. 23 after winning the Missouri Valley Conference tournament. The Golden Bears are No. 25 after sweeping a pair of road games at Washington.

D1Baseball editors Aaron Fitt and Kendall Rogers determine the Top 25 rankings. Records are through games of May 26.