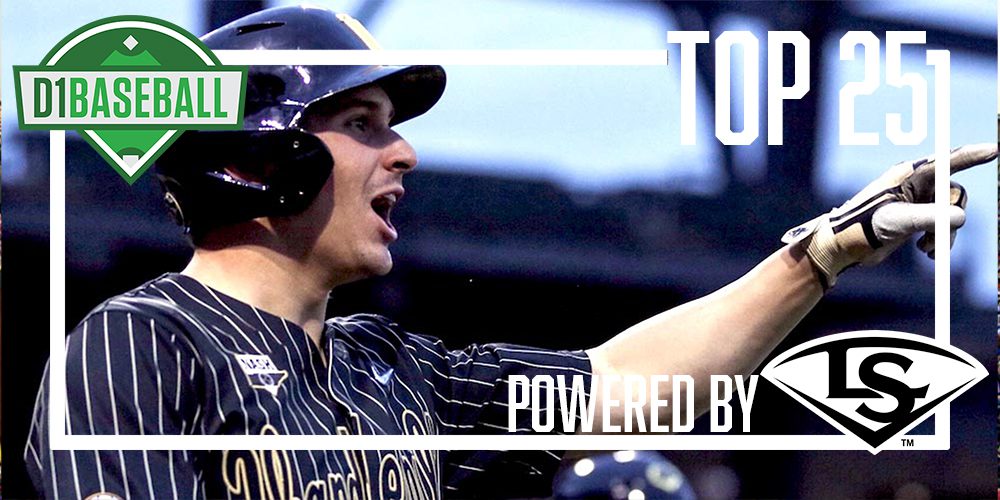 Vanderbilt moves up to No. 2 in the latest D1Baseball Top 25, powered by Louisville Slugger

For the ninth straight week, UCLA is No. 1 in the D1Baseball college Top 25 rankings, powered by Louisville Slugger. The only other team to be ranked No. 1 this season, Vanderbilt, is now back up to No. 2.

The Bruins still have not lost a weekend series or a midweek game this season. They continued that run with a Tuesday win against Long Beach State, then swept a road series at Washington State, creating a three-way tie for first place in the Pac-12 with Stanford and Oregon State.

Vanderbilt moves up a spot to No. 2 after a midweek win at Louisville and a weekend conference series victory against Missouri. Vandy’s rise pushed Stanford down one spot to No. 3, though the Cardinal won a road series at rival California. Arkansas and Mississippi State held steady at No. 4 and No. 5 after winning conference series against ranked rivals.

Louisville falls three spots to No. 9 after their 1-3 week, and Georgia Tech, Georgia and East Carolina move ahead of them to Nos. 6-8. Texas Tech holds firm at No. 10 after a 1-0 week.

Oklahoma State continues its climb up the rankings, again making the week’s biggest jump. The Cowboys move up five spots to No. 13 after taking two of three from rival Oklahoma, one week after sweeping Oregon State on the road.

The week’s biggest fallers were Ole Miss, down four spots to No. 15 after getting swept at home by Mississippi State; LSU, down four to No. 19 after losing its second straight series; and North Carolina, down seven to No. 20 after a 1-3 week that included a series loss at Pittsburgh.

Just one new team entered the Top 25 this week. Indiana returns to the rankings at No. 25 after winning a road series at Michigan. Iowa falls out of the rankings after a series loss to Michigan State.

D1Baseball editors Aaron Fitt and Kendall Rogers determine the Top 25 rankings. Records are through games of May 12.