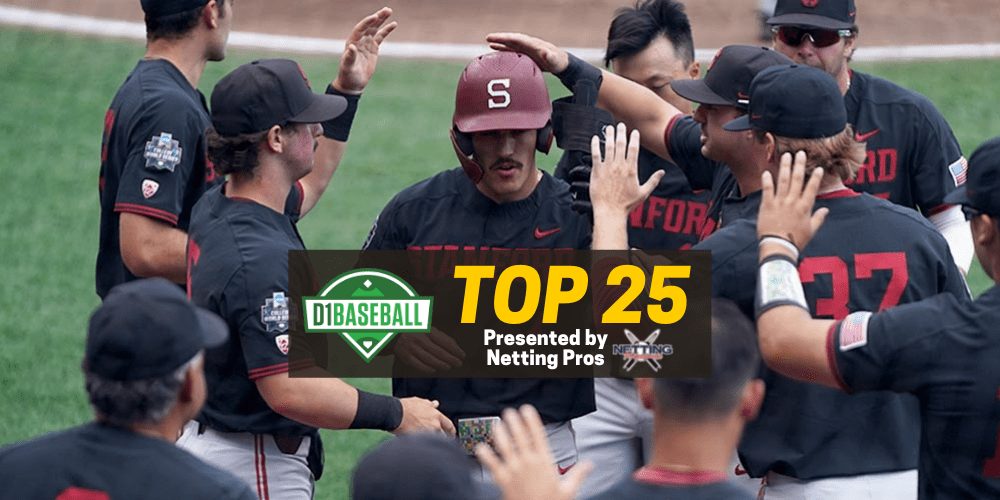 Despite losing its first SEC game of the year on Friday, Tennessee remained No. 1 in the D1Baseball Top 25 rankings after winning a series against Alabama to improve to 33-3 overall. Oregon State moved up one spot to No. 2 after sweeping Long Beach State. Oklahoma State and Arkansas climbed two spots apiece to Nos. 3 and 4, respectively.

Then things got messy in the rankings, as 15 of last week’s Top 25 clubs lost their weekends. Miami fell three spots to No. 5 after dropping two of three at Virginia Tech, which took advantage of the carnage and vaulted 13 spots to No. 8. Southern Miss moved up five spots to No. 6 after running its winning streak to nine games and opening up a two-game lead in the Conference USA standings.

Stanford made the week’s biggest move, catapulting 15 spots to No. 7 after winning a road series at UCLA, which fell one spot to No. 13. The Cardinal has recovered from a slow start and is now 11-7 in the Pac-12, with series wins on the road against both Oregon State and UCLA.

Arizona, Florida, Alabama and Ole Miss all fell out of the Top 25 after losing their weekends.