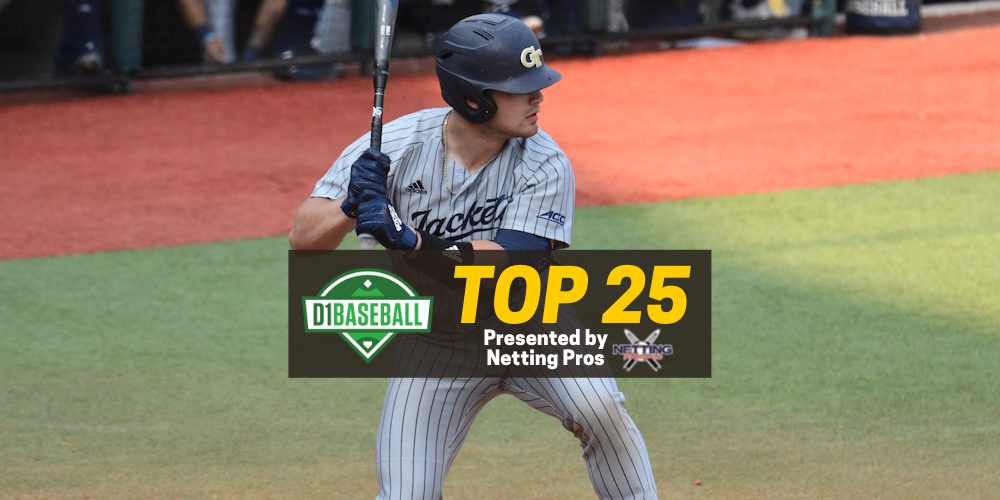 Tennessee remained No. 1 in the D1Baseball Top 25 rankings for the sixth week in a row after winning a series against Auburn to improve to 40-4 overall and 19-2 in the SEC. Pac-12 leader Oregon State held steady at No. 2 following a road series win at Utah. Oklahoma State, which swept a road series at Texas and moved into sole possession of first place in the Big 12, jumped five spots to No. 3. Arkansas climbed one place to No. 4, while Virginia Tech continued its rapid ascent with a road series win at rival Virginia, helping the Hokies climb two spots to No. 5.

Georgia Tech returned to the rankings at No. 21 after its series win against Miami, while Florida State rejoined at No. 23 after going 2-0 against TCU this weekend, with the series finale rained out. The Horned Frogs fell four spots to No. 24 after an 0-3 week but remained in the rankings thanks to back-to-back series wins over Texas Tech and Oklahoma State over the two previous weeks. UC Santa Barbara made its season debut in the rankings at No. 25 following a big series win against its lone viable challenger in the Big West, Cal Poly. The Gauchos are dominating the conference at 19-2.