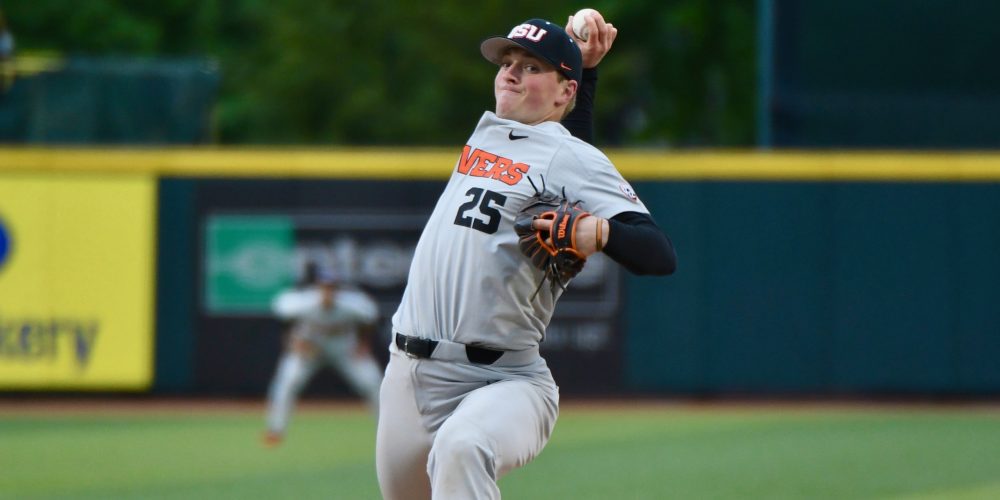 Oregon State wrapped up its conference slate with a sweep of Washington State to finish an unprecedented 27-3 in the Pac-12, keeping the Beavers atop the D1Baseball Top 25 rankings for the 10th straight week. With four nonconference games remaining next weekend against Abilene Christian, Oregon State (45-4) has tied the school record for regular-season victories.

Louisville went 0-3 on the week and dropped out of the No. 2 spot for the first time since March 13. The Cardinals fell three spots to No. 5, behind North Carolina, Texas Tech and Florida, which moved up one spot apiece.

TCU also climbed one spot to No. 6, and LSU jumped three spots to No. 7 after sharing the SEC regular-season championship with Florida. Kentucky moved down two spots to No. 8 after losing two of three at Florida. Long Beach State clinched the Big West title and head steady at No. 9, and Stanford swept Washington to move up one spot to No. 10.

A few teams made jumps in the 11-15 range. Conference USA champion Southern Miss vaulted four spots to No. 11 after running its winning streak to 14 straight games. Arkansas jumped five spots to No. 13 after winning a road series at Texas A&M and earning the No. 4 seed in the SEC tournament. Wake Forest leapt five spots to No. 14 after finishing the regular season with a 19-11 mark in the ACC. And Arizona climbed three spots to No. 15 after sweeping its second straight conference series, on the road at Arizona State.

A pair of American Athletic Conference teams joined the Top 25 after finishing tied atop the regular-season standings. UCF made its season debut in the rankings at No. 24, and Houston re-entered the rankings at No. 25. They replaced Texas A&M and Old Dominion, which both dropped out after 1-3 weeks.

D1Baseball editors Aaron Fitt and Kendall Rogers determine the Top 25 rankings. Records are through games of May 21 and do not include ties.