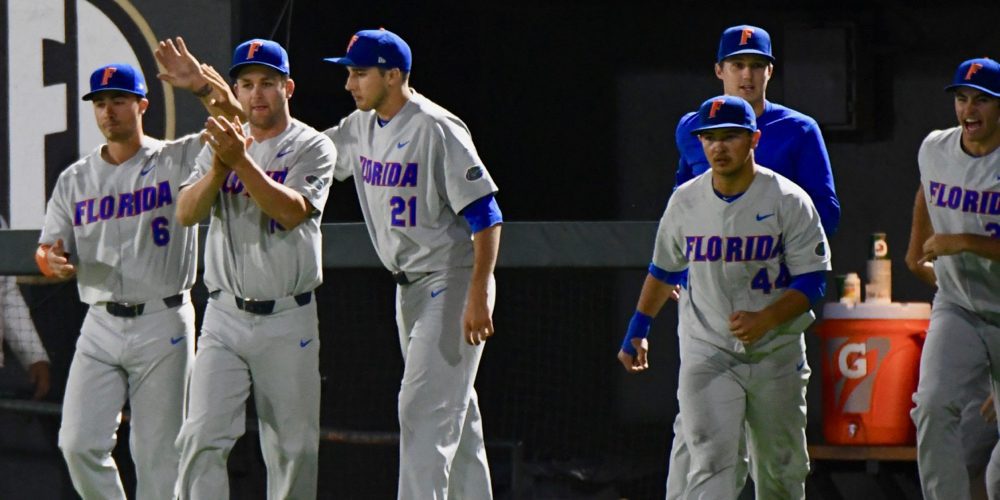 
Oregon State maintained its stranglehold on the No. 1 spot in the D1Baseball Top 25 rankings for the eighth week in a row after a 4-0 week against four conference opponents. After a midweek win against rival Oregon, the Beavers scored 29 runs in a three-game sweep of California, improving them to 38-4 overall and 21-3 in the Pac-12. With two conference weekends left on the schedule, OSU’s magic number to clinch the Pac-12 title is two.

Louisville swept a road series at Notre Dame to run its winning streak to 11 games and remain No. 2 in the rankings. The Cardinals lead Division I with 42 wins.

After No. 3 North Carolina (which was idle this weekend), Texas Tech and Florida moved up two places apiece to No. 4 and No. 5, respectively. The Red Raiders won a big road series at West Virginia, while Florida capped a 5-0 week with a sweep of Ole Miss to take sole possession of first place in the SEC East. TCU moved up three spots to No. 6 after sweeping then-No. 24 Texas, which fell out of the rankings. And SEC West leader Mississippi State jumped four spots to No. 7 after winning a thrilling road series at Texas A&M, which slipped four spots to No. 19.

Kentucky and Auburn both tumbled out of the top five after disappointing weekends against SEC bottom feeders. The Wildcats fell five spots to No. 9 after dropping a series to Georgia, the last-place team in the Eastern Division. And Auburn plummeted nine places to No. 14 after getting swept by Alabama, which entered the weekend with a 2-19 conference record.

Stanford climbed two spots to No. 12 after winning a road series at Arizona State, though the Cardinal saw its 11-game winning streak snapped on Sunday. And Arizona also moved up two places to No. 17 after sweeping Washington.

One team joined the Top 25 this week. Old Dominion made its season debut in the rankings at No. 25 after taking a road series at UAB. The Monarchs have lost just one series this season and own quality series victories at Southern Mississippi, vs. Charlotte and vs. West Virginia.

D1Baseball editors Aaron Fitt and Kendall Rogers determine the Top 25 rankings. Records are through games of May 7.