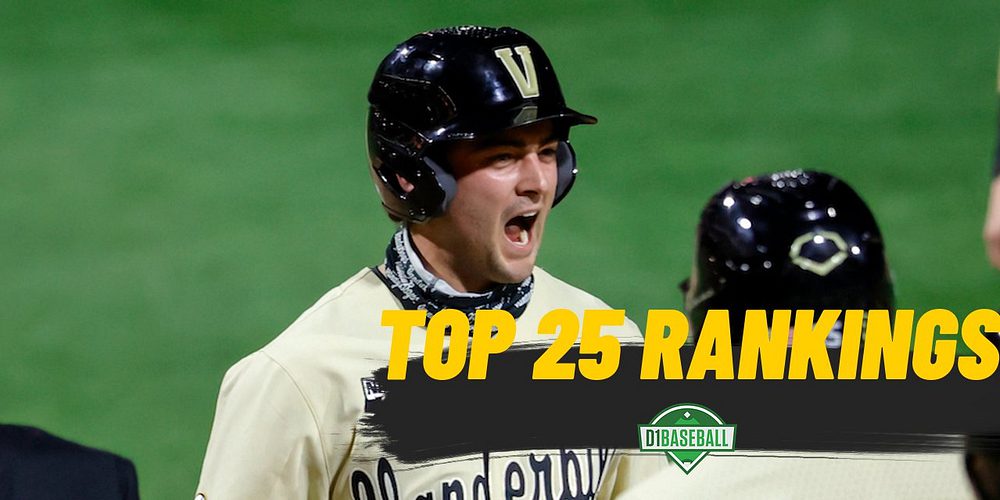 The all-SEC top five remained the same in the D1Baseball Top 25 rankings. Arkansas held firm at No. 1 after winning a road series at Louisiana Tech, despite taking its first loss of the season on Sunday. Vanderbilt remained No. 2 after winning two of three on the road at then-No. 13 Oklahoma State, which dropped one spot to No. 14. Mississippi State, Ole Miss and Florida round out the top five.

East Carolina moved up five spots to No. 9, and Texas made the biggest move of the week, jumping nine spots to No. 10 after sweeping a three-game set against South Carolina. The Gamecocks, who entered the weekend undefeated, dropped from No. 12 to No. 16.

Two upstarts from the ACC’s northern wing also made big moves. Notre Dame vaulted eight spots to No. 17 after winning its third straight conference road series, sweeping Virginia. Pittsburgh made its debut in the rankings, jumping in at No. 18 after taking a road series from Georgia Tech, which fell from No. 7 to No. 12. The Pitt resumé also includes a road series sweep of Florida State and a quality series win against Indiana State.

Two other teams made their season debuts in the rankings. Oregon jumped in at No. 20 after winning a road series from rival Oregon State, which fell seven spots to No. 23. The Ducks also swept a four-game set at UC Santa Barbara a week ago. And Michigan checked into the rankings at No. 22 after sweeping a four-game series from Purdue to improve to 7-1 on the season.

Florida Atlantic, West Virginia and Arizona dropped out of the Top 25.

D1Baseball’s editors and national writers determine the Top 25 rankings. Records are through games of March 14.