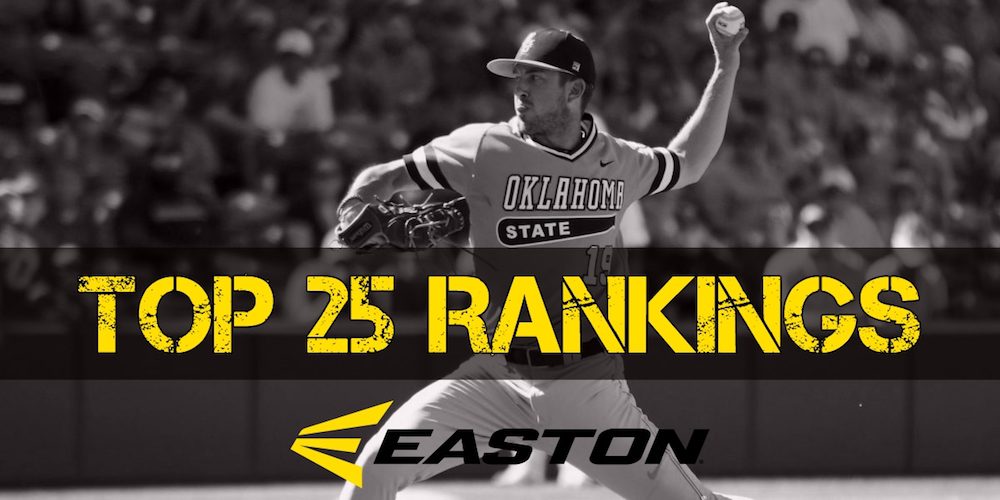 Florida and Stanford maintained their positions in the top two spots of the D1Baseball Top 25 rankings for the fourth straight week after winning quality road series in Week 10. The Gators took two of three at then-No. 6 Kentucky, while the Cardinal swept Arizona in Tucson.

NC State moved up a spot to No. 3 after a 3-1 week that included a midweek win against North Carolina and a series win over then-No. 9 Duke. Texas Tech also climbed one place to No. 4 after winning two of three from Oklahoma, and Oregon State returned to the top five after sweeping Oregon.

Ole Miss jumped five spots to No. 6 following a series win against then-No. 23 Georgia, moving the Rebels into a tie for first place in the SEC West with Arkansas, which fell four spots to No. 7 after getting swept on the road by Mississippi State. East Carolina, UCLA and North Carolina each moved up to round out the top 10 after sweeping conference series.

Other big climbers include Southern Miss (up three spots to No. 11) and Clemson (up five to No. 12), while Florida State (No. 16), Coastal Carolina (No. 18) and Texas (No. 19) moved up two spots apiece. UConn and Minnesota jumped four spots apiece to Nos. 20 and 21, respectively.

Three new teams entered the rankings: Big 12 leader Oklahoma State at No. 23, South Florida at No. 24, and Tennessee Tech at No. 25. The Golden Eagles have won 25 consecutive games, the longest streak in the nation.