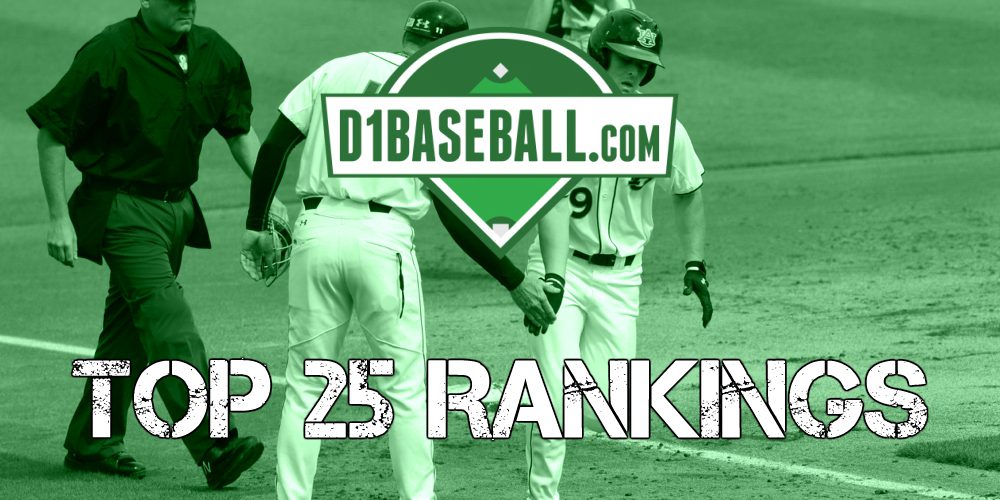 The top five teams remained the same in the D1Baseball Top 25 rankings. Defending national champion Florida held onto the top spot after a 5-0 week that improved the Gators to 12-1 overall. Florida is followed by three undefeated teams: No. 2 Oregon State, No. 3 Texas Tech and No. 4 Florida State. Arkansas remained No. 5 after a 4-1 week that included a series win against Southern California.

There was minor shuffling in the back half of the top 10, as Kentucky and Stanford moved up one spot apiece to Nos. 6 and 7 after continuing their torrid starts against strong competition. The Wildcats routed Houston, Sam Houston State and Louisiana to complete an unbeaten run through the Shriners College Classic in Houston. The Cardinal won three out of four against Michigan, following sweeps against Cal State Fullerton and Rice over the first two weekends. The cumulative work of Kentucky and Stanford forced TCU to drop two spots to No. 8 even after winning its third straight series — but getting blown out in Sunday’s series finale against UC Irvine. The Frogs have won two of three in each of their first three series — all against unranked West Coast foes — but have not been able to complete a sweep.

Clemson jumped two spots to No. 11 after winning a thrilling series against rival South Carolina, one week after sweeping Dallas Baptist. Louisville remained unbeaten but has played a softer schedule than the Tigers, so the Cardinals remained at No. 12. Indiana moved up three spots to No. 14 after going on the road and winning three of four at San Diego — which was coming off a loud 4-0 weekend at the Tony Gwynn Legacy event.

Auburn jumped into the rankings at No. 18 after a 4-0 week that included a midweek win against then-No. 15 South Alabama and a quality three-game sweep of BYU. The Tigers improved to 12-0. Coastal Carolina also made its season debut in the rankings at No. 24 after going 3-1 on the week to improve to 10-3. Coastal’s resume is highlighted by quality wins against Oklahoma, West Virginia and UNC Wilmington.

The Jaguars tumbled from No. 15 all the way out of the Top 25 after an 0-5 week against strong competition, capped by a four-game sweep on the road at the hands of Texas Tech. Houston also fell out of the rankings after going 0-3 at the Shriners Classic.