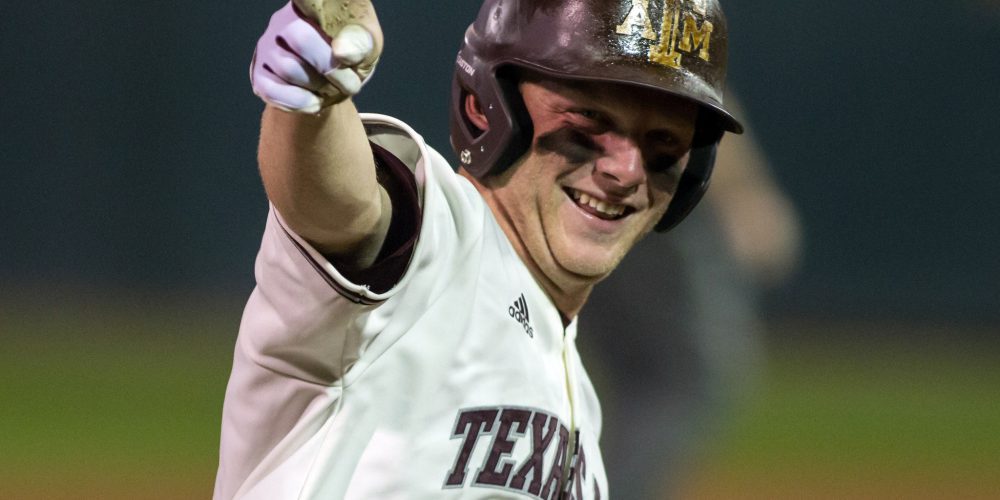 Texas A&M returned to No. 1 in the D1Baseball Top 25 rankings for the first time since Week Six (March 28), which was the Aggies’ only previous week at the top this season. The Aggies, who lost just one series all season, finished their regular-season slate with three straight marquee series wins vs. Vanderbilt, at South Carolina and vs. Ole Miss.

A&M finished a game behind SEC regular-season champion Mississippi State in the standings, but the Aggies swept the Bulldogs in Starkville, which makes up for the one-game difference in the standings (particularly since SEC schedules are unbalanced). The Bulldogs moved up one spot to No. 3 in the rankings, one spot behind Miami, which earned the top seed at the ACC tournament after winning a road series at rival Florida State. Last week’s No. 1, Florida, fell three spots to No. 4 after dropping a series at LSU, and Louisville remained No. 5.

In a year of ACC and SEC dominance, 12 of the first 13 spots in the rankings are occupied by teams from those two conferences — seven from the SEC and five from the ACC. SEC powers LSU, South Carolina and Vanderbilt moved up two spots apiece this week to take over spots 8-10. The one interloper from another conference in the top half of the rankings is Big 12 regular-season champ Texas Tech, which stayed put at No. 6.

The biggest mover this week is Clemson, which vaulted seven spots to No. 12 after sweeping a road series at Notre Dame to climb to 16-14 in the ACC. The Tigers finished very strong, winning their final three conference series against Florida State, NC State and the Irish.

Two teams joined the Top 25 this week. Louisiana-Lafayette, which surged to a share of the regular-season title in the Sun Belt and the top seed in the conference tournament, jumped into the rankings at No. 20. And surprising Arizona State, which won its sixth straight series this weekend at UCLA, entered at No. 22. The Cajuns and Sun Devils replaced Georgia Tech and Minnesota, which both fell out of the Top 25 after dropping home series.

D1Baseball editors Aaron Fitt and Kendall Rogers determine the Top 25 rankings. Records are through May 22 and do not include ties.