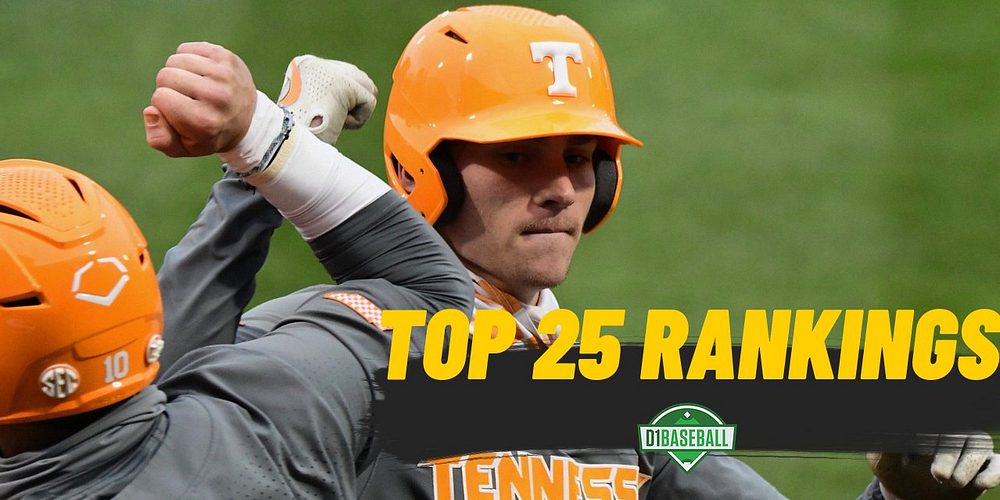 Vanderbilt remained No. 1 in the D1Baseball Top 25 rankings after sweeping a road series at LSU to improve to 23-3 overall and 8-1 in the SEC. Arkansas stayed put at No. 2 after winning a hard-fought series against Auburn, and Ole Miss stayed at No. 4 despite dropping two of three on the road at Florida. Texas moved up a spot to No. 4, and Mississippi State returned to the top five, climbing three spots from No. 8 after sweeping Kentucky.

Tennessee continued its rise up the rankings, moving up three spots to No. 6 after winning a road series at Alabama. East Carolina and TCU returned to the top 10 at Nos. 9 and 10, respectively.

South Carolina and Florida moved up three spots apiece to 11 and 12 after winning series at Georgia and vs. Ole Miss, respectively. There weren’t any other big climbers in the rankings, though a number of teams moved up a spot or two. Georgia Tech fell nine spots to No. 15 after dropping a series to Virginia, and UCLA tumbled from No. 10 to No. 21 after losing a home series to Washington. The last four teams — Arizona, Virginia Tech, Pittsburgh and Michigan — remained static.

D1Baseball editors and national writers determine the Top 25 rankings. Records are through games of April 4.