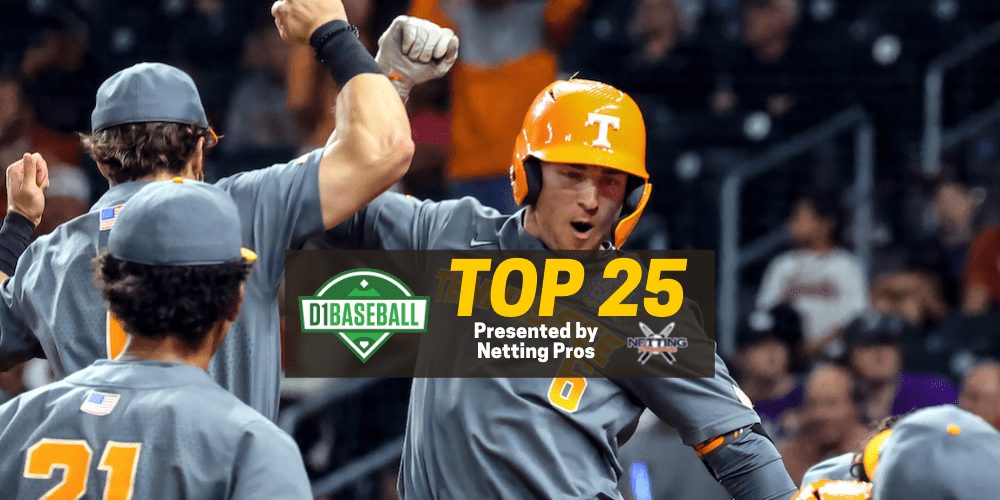 Tennessee took over No. 1 in the D1Baseball Top 25 for the first time in the eight-year history of the rankings. The Volunteers jumped from No. 5 after sweeping a road series at then-No. 1 Ole Miss, outscoring the Rebels 26-7. The Volunteers improved to 23-1 on the season.

There was significant upheaval throughout the rankings, as 11 ranked teams lost their weekends. Oklahoma State ran its winning streak to 11 and climbed three spots to No. 6. Texas Tech made the week’s biggest jump, up nine places to No. 7 after winning a home series against Texas, which fell six spots to No. 8. Vanderbilt and Ole Miss fell to Nos. 9 and 10, respectively.

Other big climbers this week include Louisville and TCU, which jumped seven spots apiece to 11 and 12. LSU vaulted eight spots to No. 13 after winning a road series at Florida, which slid six places to No. 14.

Miami returned to the rankings, leaping in at No. 17 after sweeping a home series against North Carolina, which fell from No. 13 to No. 18. Dallas Baptist also rejoined the rankings by taking two of three from then-No. 22 Maryland. The Patriots jumped in at No. 19. The third entrant in the rankings this week is Oregon, which made its season debut in the Top 25, checking in at No. 21 after winning its third straight Pac-12 series.

Liberty, Maryland and Clemson fell out of the rankings.