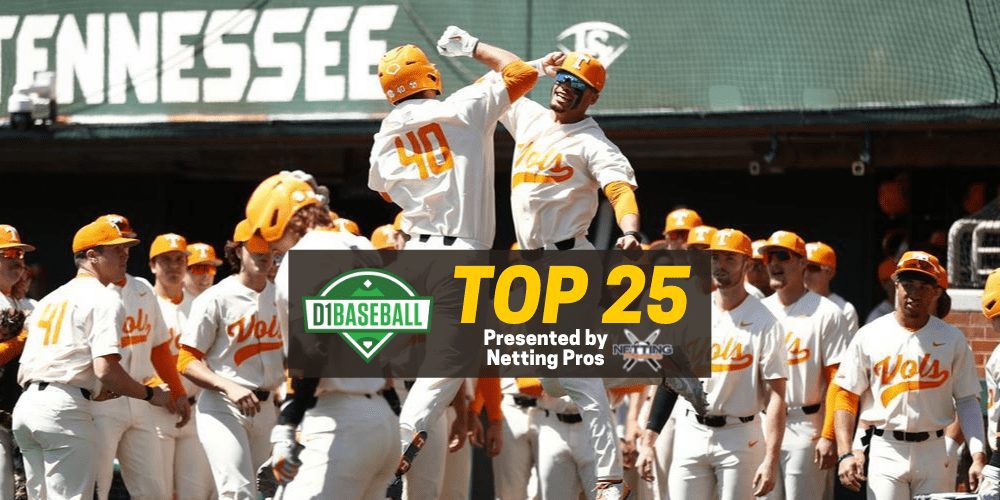 Tennessee remained No. 1 in the D1Baseball Top 25 rankings after sweeping Missouri to become the first team ever to start SEC play 12-0. The Volunteers are 31-1 overall and have won 23 games in a row.

Miami jumped six spots to No. 2 after sweeping then-No. 3 Virginia in Coral Gables. The Hurricanes are riding a 13-game winning streak and sit 13-2 in the ACC, four games ahead of the second-place Cavaliers in the Coastal Division. Virginia dropped five spots to No. 8.

Oregon State moved up two spots to No. 3 after sweeping a road series at Southern California for the first time ever. Texas Tech held steady at No. 4 following a 3-2 week, with fellow Big 12 powers Oklahoma State (No. 5) and Texas (No. 7) nipping at their heels after winning weekends. Arkansas fell four spots to No. 6 after dropping two of three at Florida, the first regular-season series loss for the Hogs since 2020. Louisville and Notre Dame moved up three spots apiece to round out the top 10.

The shakeup continued outside the top 10. Southern Miss vaulted seven places to No. 11 after sweeping a road series at Charlotte. UCLA moved up three spots to No. 12, followed by Georgia, Gonzaga, LSU and Dallas Baptist, all of whom moved up thanks to teams ahead of them plummeting.

Auburn leads a group of five new entrants in the Top 25 this week. The Tigers jumped in at No. 17 after winning their third straight SEC series, taking two of three from then-No. 16 Vanderbilt. Virginia Tech also made its season debut in the rankings, checking in at No. 21 after winning its fourth straight ACC series, at home against then-No. 21 NC State. Stanford returns to the rankings at No. 22 after sweeping Arizona State, and Florida is back in at No. 23 after a one-week absence, on the heels of its series win against Arkansas. Alabama makes its season debut at No. 24 after sweeping Ole Miss in Oxford for the first time since 1997. The Rebels tumbled all the way from No. 9 to No. 25.