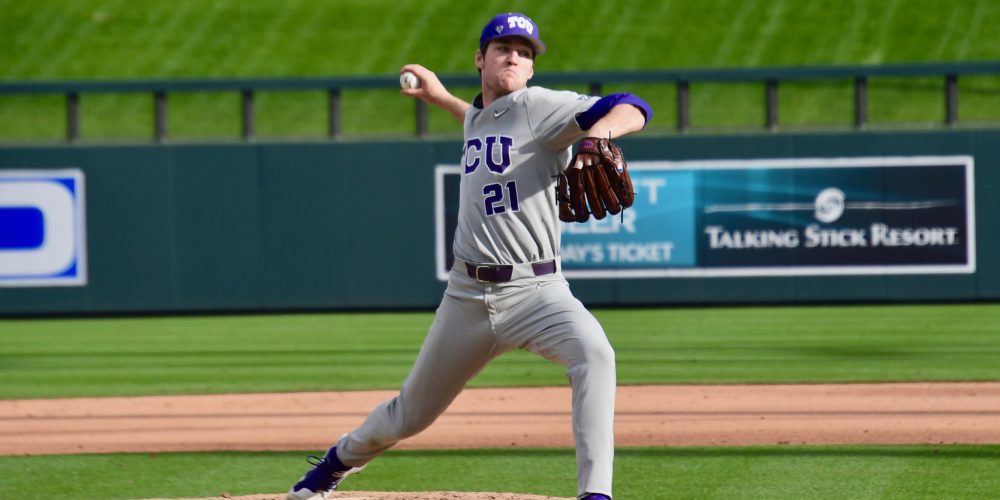 So you thought TCU was done? Not so fast, my friend! The Horned Frogs entered this weekend just 6-9 in the Big 12, with eight losses in their last 10 games, an RPI in the 80s, looking like a long shot to make regionals. But just when we were all ready to stick a fork in the Frogs, they rallied to win a road series at West Virginia. After beating soon-to-be first-rounder Alek Manoah and the Mountaineers 14-5 on Friday, TCU clinched a mammoth road series victory with a 6-1 win on Saturday behind a complete-game gem from Charles King (9 IP, 4 H, 1 R, 0 ER, 1 BB, 8 K). Josh Watson and Austin Henry had three hits apiece to lead the TCU offense, and Alex Isola went 2-for-5 with three RBIs and a pair of doubles.

Just like that, TCU vaulted 26 spots to No. 66 in the RPI, and its at-large hopes are alive again. With another win Sunday, the Frogs would even their Big 12 record at 9-9, with series remaining at home against Kansas and on the road at Texas Tech. If TCU can finish .500 in conference play, it stands a good chance of making the NCAA tournament. That means the Frogs can’t afford to ease off the accelerator on Sunday in Morgantown.

2. Cowboys win battle of the OSUs

Go ahead, raise your hand if you predicted Oklahoma State would go to Corvallis and take two of three from No. 3 Oregon State. I’ll wait.

On the heels of Friday’s 1-0 win behind Jensen Elliott, Oklahoma State clinched a garguntuan road series win with a 5-2 victory Saturday in Corvallis. The Cowboys got solo homers from Christian Funk and Andrew Navigato, plus sacrifice flies from Funk and Colin Simpson and an RBI single from Funk to build a 5-1 lead through five innings, and its bullpen made that lead stand up. Logan Gragg led the way with four innings of one-hit, shutout relief, striking out five and walking two.

The Cowboys jumped five spots to No. 19 in the RPI with the victory, putting them right back in the regional hosting discussion.

Ole Miss responded well to Friday’s series-opening 8-3 loss at LSU, beating the Tigers 5-1 on Saturday to even the big SEC West series. Kevin Graham’s three-run homer in the fourth provided the big blow for the Ole Miss offense in support of lefty Doug Nikhazy (6.1 IP, 5 H, 1 ER, 1 BB, 4 K). Austin Miller and Parker Caracci followed with 2.2 combined innings of hitless relief to nail down the victory.

Ole Miss improved to 14-9 in the SEC, tied with LSU. Whichever team wins Sunday’s rubber game will gain an important edge in the regional hosting race.

Three weeks ago, Michigan lost a series at Ohio State and found itself staring at the wrong side of the at-large bubble. The Wolverines salvaged Sunday’s series finale in Columbus, and they haven’t lost since. They ran their winning streak to 10 games with a 10-4 win at Maryland on Saturday, putting them in control of the Big Ten race at 13-3 in the standings, 2.5 games ahead of Indiana and Nebraska. Joe Donovan (2-for-4, 3 RBI) led a balanced 11-hit attack for the Wolverines in support of Tommy Henry (6.1 IP, 6 H, 3 ER, 1 BB, 7 K), who improved to 8-3 on the year. The win also catapulted Michigan 14 spots to No. 39 in the RPI, putting the 33-11 Wolverines firmly on the good side of the at-large bubble.

In this week’s D1Baseball field of 64 projection, BYU was one of the first teams out of the field. That figures to change next week. The Cougars clinched a huge road series at Loyola Marymount with a 10-3 win on Saturday. Keaton Kringlen (2-for-5, HR, 3 RBI) led a balanced 12-hit attack for BYU, which got three scoreless innings of relief from Blake Inouye, two scoreless frames from Drew Zimmerman, and one scoreless inning from Mitch McIntyre.

BYU is now in first place in the WCC at 15-6 (percentage points ahead of 16-7 Gonzaga), and its RPI climbed three more spots to No. 29. If the season ended today, BYU would be a slam dunk for an at-large bid.

We’ll have a lot more on Mississippi State and Texas A&M on Sunday, but the Bulldogs picked up yet another marquee series win by winning the back-end of a doubleheader against the Aggies, 4-3, in tense fashion.

The afternoon began with a classic pitcher’s duel between MSU freshman righthander JT Ginn and Texas A&M sophomore lefthander Asa Lacy. Ginn struck out seven, walked two and allowed just three hits and a run in six innings, while Lacy was terrific, striking out eight and allowing just three hits in a complete game seven-inning shutout and 1-0 win for the Aggies.

MSU responded in impressive fashion in the series finale despite the Aggies making a ferocious run in the seventh inning. Mississippi State righthander Peyton Plumlee did a terrific job with his sinking fastball in the win, striking out one and allowing three runs and six hits in six innings. Offensively, Jake Mangum tallied two hits (three for the day) and Justin Foscue put together yet another solid performance, going 2-for-4 with two RBIs and a huge solo home run in the sixth inning that proved to be the game’s winning run. Foscue finished off an impressive weekend, both offensively and defensively.

State’s pitching staff had a heck of a weekend, allowing just four runs in 23 innings. It continues to be in great shape for a top eight national seed.

Rick Heller’s Hawkeyes have done some serious damage in the Big Ten Conference, but they took their show into non-conference play against No. 25 UC Irvine. The Hawkeyes captured the series opener on Friday before notching yet another marquee series win with a 1-0 triumph on Saturday.

With the series win, the Hawkeyes now have series triumphs over UC Irvine, Illinois, Nebraska, and of course, Oklahoma State, on the road, earlier this season. More importantly, Iowa’s up to 29 wins for the season with an RPI of 50, which is an 11-spot increase from last season. Iowa was already in our field of 64 last week, but its chances of making the postseason just got even better.

B5 | Iowa's first hit comes from @tannerpadgett29 on a ball that was lost in the sun! #Hawkeyes pic.twitter.com/s09a6Idq9s

The Sun Devils entered the weekend looking to make a statement on the national stage. Well, yeah, that didn’t happen this weekend. UCLA won the series opener in close fashion before rolling Saturday afternoon in a series-clinching 18-3 win over the Devils.

UCLA jumped out to a 3-0 lead after three innings before Chase Strumpf smacked a grand slam in the fourth to extend the lead to 7-0. The Bruins didn’t think about letting off the accelerator, scoring a run int he fifth, sixth and seventh innings before capping it all off with an eight-run eighth inning that included a three-run home run from Michael Toglia, a two-run shot from Jake Hirabayashi and a three-run home run from Garrett Mitchell.

Mitchell finished the afternoon with four hits and four RBIs, while Noah Cardenas has a productive day at the plate, going 5-for-5 with an RBI. While ASU’s Boyd Vander Kooi allowed eight runs and nine hits in 4.1 innings, UCLA starting pitcher Jack Ralston was outstanding yet again, striking out seven, walking one and allowing three hits in seven shutout frames.

UCLA remains a slam drunk to be the top national seed in the postseason field, while ASU has dropped 10 spots in the RPI over the past week to 49 with a 13-10 league mark. The Devils would still make the postseason field as fo today with that league mark and RPI, but boy, it isn’t anywhere near as much of a slam dunk as it once was.

We heard you guys like home runs, so we put together a super-cut of all 7️⃣ big flies the Bruins bashed today in an 18-3 win at ASU. Today's HR hitters included:

The Fighting Illini took the series opener from the Hoosiers on Friday, and they didn’t let up Saturday in a series-clinching 3-1 victory. Illinois righthander Ty Weber struck out and walked two each and allowed just two hits in six shutout innings, while for IU, Tanner Gordon struck out five, didn’t walk anyone and allowed three runs and six hits in seven innings.

Offensively, neither team did much on Saturday, but Illinois slugger Jack Yalowitz hit a solo home run in the fourth before talented second baseman Michael Massey hit a two-run home run in the fifth inning.

Illinois has been red-hot the past few weeks and is now just one game outside of second place behind Nebraska. More importantly, though, Dan Hartleb’s club is up to 18 in the RPI with an 11-7 mark against RPI Top 50. Illinois also is trending upward in the league standings. The Illini could hop into the Top 16 hosting mix with a strong finish to the regular season.

5. Texas Tech continues to roll along

It wasn’t that long ago we were waiting on the Red Raiders to get their act together. Well, Tim Tadlock’s club is rolling and clinched their third straight Big 12 Conference series with a 7-3 road triumph over Skip Johnson’s Oklahoma club.

On the mound, righthander Caleb Kilian struck out two, walked two and allowed two runs on six hits in five innings, while Connor Queen was terrific out of the pen with two strikeouts in 2.2 shutout frames. Meanwhile, Oklahoma wasted a solid start from lefthander Levi Prater, who struck out six and  allowed just one run and three hits in six innings.

At the plate, Tech’s Cameron Warren and Braxton Fulford each finished the night with two hits, while Brian Klein and Josh Jung each knocked in two runs and leadoff hitter Gabe Holt chipped in an impressive three-hit performance.

With the win, the Red Raiders now have an impressive 16-7 record vs. RPI Top 50 teams while the RP is nearing the Top 10. The Red Raiders still have much to play for the final few weeks of the regular season and going into the conference tournament.

〈
Previous Article How The Top 25 Performed: Week 12
Next Article UCLA's Ralston Steps Up When Needed Most
〉