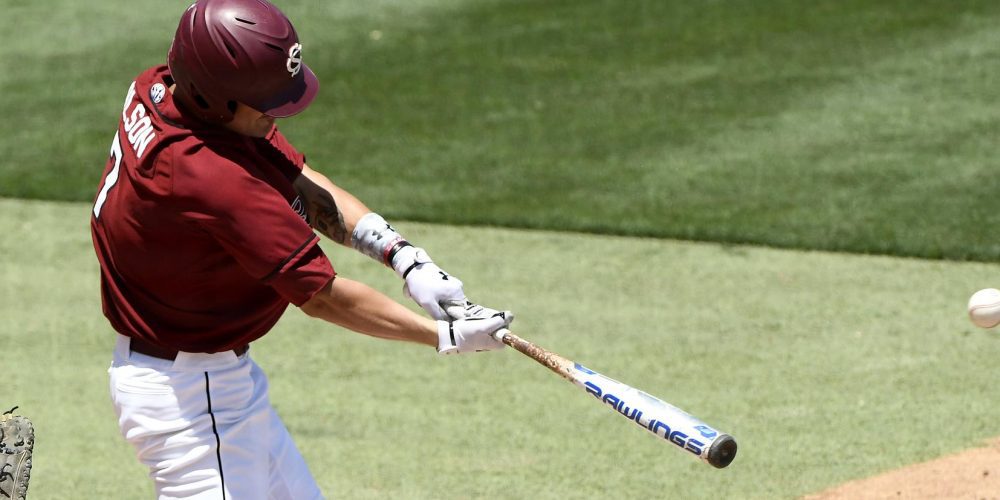 North Alabama over No. 18 Ole Miss

The Rebels picked up a huge road series win over Arkansas this past weekend but took a slight step back Tuesday with an ugly 10-6 loss to North Alabama, a transitional team with an RPI well into the 200s. Davis Elliott had three hits, one a double and two RBIs to lead the way for UNA, while Harris Kain also had a double, along with three hits and four RBIs. Pitching for both clubs was iffy throughout the afternoon, but Hunter Davidson threw well for UNA, allowing just one hit in four shutout innings. Ole Miss’ RPI dropped 10 spots from this setback.

• No. 1 UCLA used a strong balance of pitching and hitting to take down Cal State Northridge, 10-1. Freshman Jesse Bergin struck out eight, walked one and allowed a run and three hits in 5.2 innings, while offensively, Chase Strumpf, Jack Stronach and Ryan Kreidler each hit doubles in the win. Stronach led the charge with three RBIs.

• No. 2 Stanford
used strong pitching to beat Fresno State, 2-0, Tuesday night. Will Matthiessen started and struck out three in three shutout innings, while Alex Williams tossed two shutout frames as well. Matthiessen helped his own cause offensively with a pair of hits, while Duke Kinamon also had a two-hit performance.

• UPSET ALERT! No. 3. Oregon State was yet another upset victim Tuesday night in a 4-3 loss to San Diego State. Adrian Mardueno put together a strong outing against the Beavers, striking out six, walking one and allowing two hits in seven shutout innings. Meanwhile, three Aztecs finished the night with two hits, including Matt Rudick, Angelo Armenta and Casey Schmitt.

• No. 4 Georgia went on the road and took care of No. 23 Clemson, 5-4. Aaron Schunk hit a two-run home run in the first to set the tone and finished the afternoon with two hits and three RBIs, while Cam Shepherd had a double and two RBI. Tim Elliott put together a strong start for the Bulldogs, striking out seven, not walking anyone and allowing two runs and three hits in 7.1 innings.

• No. 5 Vanderbilt needed a two-run rally in the ninth inning to tie Western Kentucky before winning 5-4 in extra innings. Austin Martin and JJ Bleday each hit home runs in the ninth to send the game to extra before Bleday struck again in the 10th with a walk-off single. Martin finished the night with three hits and two RBIs, while Harrison Ray and Cooper Davis each had two hits.

• No. 7 Arizona State was shocked Tuesday night by 3-23 Long Beach State, 14-9. The Sun Devils made a fierce rally late in the game, but it wasn’t enough to stage a comeback. Jacob Hughey, Jake Vander Wal, Chase Luttrell and Tyler Porter each hit home runs for the Dirtbags, with Porter knocking in four runs, while Luttrell and Calvin Estrada each knocked in two runs. With the setback, ASU’s RPI dropped 10 spots overnight.

• No. 9 Texas A&M used a four-run second inning to set the tone and beat rival No. 12 Texas, 9-6 in Austin. The Longhorns made things interesting with a late rally, but the Aggies added a pair of runs in the ninth on a two-run single by Logan Foster. Dustin Saenz led the Aggies on the mound with two runs allowed in six innings, while Mikey Hoehner hit a home run and had two RBIs and Jonathan Ducoff was a triple shy of the cycle and hit a home run with two RBIs. Braden Shewmake, Foster and Cam Blake each finished the night with a pair of hits.

We have a visual on the @mchoehner home run! Swelled the lead to 3-1.#GigEm pic.twitter.com/J2DCnVduzX

• No. 10 Louisville faced rival Kentucky tonight and was victorious, 8-3 at home. The bullpen excelled with Adam Elliott tossing two shutout frames and Michael Kirian throwing 1.2 shutout innings, while offensively, Jake Snider had a triple, two hits and three RBIs, and Drew Campbell finished the evening with a pair of hits.

• No. 13 LSU remained hot after its weekend series win over Mississippi State, dominating Grambling, 9-0, at home. Clay Moffitt struck out five in five shutout innings, while offensively, Josh Smith hit a home run, had two hits and knocked in three runs, and Cade Beloso and Zach Watson each finished the night with two hits.

• UPSET ALERT! No. 14 Arkansas continued its pitching woes Tuesday night in an ugly 17-7 loss to Little Rock in the first-ever meeting between the two programs. Troy Alexander hit a grand slam for the Trojans, while Christian Reyes had three hits (two doubles) with four RBIs and five others had two hits in the big win.

• UPSET ALERT! Georgia Tech continued its successful ways against SEC teams by beating No. 15 Auburn, 9-3, on the road. Michael Guldberg continued his hot hitting by going 2-for-4 with three RBIs, while Kyle McCann and Tristin English each knocked in a pair of runs. On the mound, the Tech bullpen was terrific with Luke Bartnicki tossing 2.2 shutout frames, Jonathan Hughes tossing three shutout frames and Keyton Gibson closing it out with two shutout innings.

• No. 17 Texas Tech used an offensive surge to take down New Mexico on the road, 15-6. Cole Stilwell hit two home runs to lead the charge, while Cam Warren and Dru Baker also hit home runs in the win. Also worth noting, Gabe Holt and Dylan Neuse each finished the night with a pair of hits and two RBIs.

• Illinois dropped out of the Top 25 on Monday after a bad weekend at Iowa. Well, the Fighting Illini looked the part Tuesday night in a 4-2 win over No. 19 Coastal Carolina. Aidan Maldonado allowed two runs in four innings, while offensively, Cam McDonald had two hits and Branden Comia smacked a home run.

• No. 21 Florida continued its impressive ways following a strong weekend with a 12-1 win over Florida A&M. Freshmen Nolan Crisp and David Luethje combined to throw six shutout innings and allowed just one hit, while offensively, Nelson Maldonado and Kendrick Calilao each hit home runs to lead the Gators cause.

• UPSET ALERT! It was an ugly debut as a ranked team, as No. 22 Connecticut dropped a tough 10-3 decision to Fairfield, which entered the day with an RPI of 228. UConn’s Kenny Haus allowed seven runs on eight hits in two innings, while for the Stags, Anthony Boselli hit a home run and knocked in three runs and Giacomo Brancato smacked a home run as well.

• UPSET ALERT! No. 24 Oklahoma State is yet another team that had a tough debut as a ranked club on Tuesday. The Pokes dropped an ugly 8-4 home decision to Central Arkansas. Beau Orlando had a big day for the Bears, going 2-for-5 with a home run and three RBIs, while Josh Ragan and Kolby Johnson each had two hits.

• No. 25 TCU defeated Texas-Arlington, 3-2, on a walk-off balk. Hunter Wolfe and Josh Watson each had three hits to lead the Horned Frogs, while Johnny Rizer and Zach Humphreys each had two hits in the winning cause. UTA’s Drew Gooch threw 5.2 shutout innings, while for the Frogs, Dawson Barr started the game with four shutout innings.

• Louisiana head coach Tony Robichaux won his 900th game in an 8-2 win over Southeastern Louisiana. Logan Savoy had a nice start for the Cajuns with just two runs allowed in 6.2 innings, while Hayden Cantrelle hit a home run and finished the night with three RBIs.

• Oral Roberts scored two runs in the top of the 11th inning to beat suddenly scuffling Oklahoma, 4-2. Blake Hell led the way for ORU’s offense with two hits and an RBI, while on the mound, the Golden Eagles used seven pitchers to get the win over the Sooners.

• Baylor has been sizzling hot as of late and picked up yet another solid win, a 5-1 triumph on the road against Dallas Baptist. Shea Langeliers hit a home run and finished the night with two hits, while Nick Loftin knocked in a pair of runs and Chase Wehsener went 3-for-3 to help lead the offensive charge.

• Griffin Lockwood-Powell had an afternoon to remember at Central Michigan beat Notre Dame, 17-7. Lockwood-Powell went 2-for-2 with seven RBIs, which included a three-run home run.

• Nebraska continues to play at an impressive level, beating Kansas State 7-0 on the road. Kyle Perry had a strong start for the Huskers, striking out three, walking one and allowing just three hits in seven shutout innings.

• Florida State continues to struggle, losing a 3-2 decision to Jacksonville on Tuesday. Jacob Southern hit two doubles and knocked in two runs, while Scott Dubrule had two hits and Angel Camacho had a three-hit performance in the Dolphins’ win. FSU’s RPI is now into the triple digits.