Team of the Day: Tennessee

Another day, another Garrett, and another shutout for Tennessee. A day after lefthander Garrett Crochet and two relievers combined to shut out Georgia 2-0, ace Garrett Stallings took the  mound Friday and blanked the No. 2 Bulldogs all by himself. Stallings went the distance, scattering five hits and allowing just one walk while striking out five to lead the Volunteers to a 3-0 win, clinching a massive series with one game to play. The Volunteers continue to lead Division I in shutouts — they now have eight shutouts in 36 games, and they rank 10th in the nation with a 2.96 ERA. Stallings has ld the way for this staff all year; he’s now 6-2, 1.88 with 64 strikeouts and 11 walks in 62.1 innings. The Vols posted back-to-back shutouts in an SEC series for the first time since 1967.

This was a huge series for Tennessee, which lost three of its first four SEC series, albeit against ranked opponents Auburn, Vanderbilt and Mississippi State. After taking down the second-ranked Bulldogs in back-to-back games, Tennessee put itself in much better position heading into the home stretch, improving to 6-8 in the SEC, and 26-10 overall. The Tennessee pitching staff is clearly the real deal, and the offense has done just enough this weekend. It mustered six hits Saturday, but got a pair of sacrifice flies from Justin Ammons.

Offense of the Day: Oklahoma State 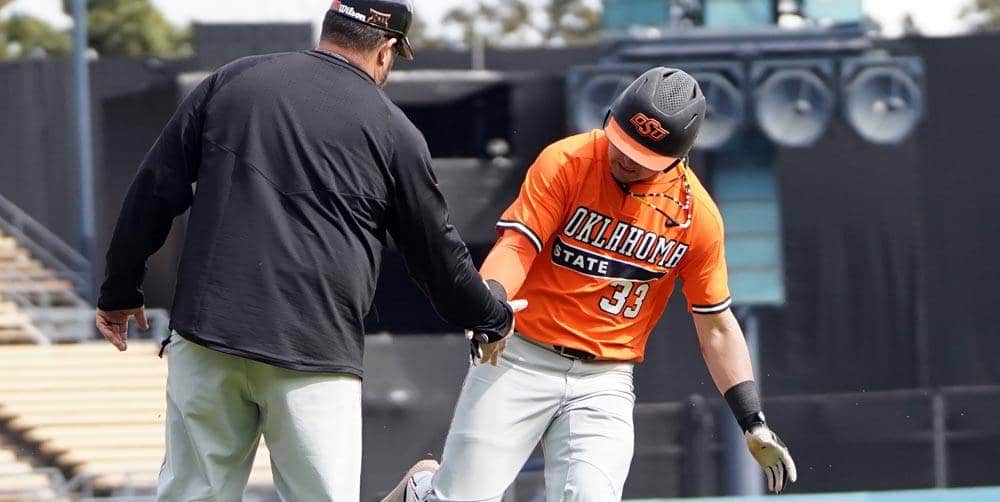 Oklahoma State’s calling card on offense is its ability to hit the long ball — and the Cowboys went absolutely bonkers with the long ball in Friday’s 27-6 win at Kansas. OSU set a program and Big 12 record with 12 home runs in the game, breaking a 20-year-old school record of 11 homers in one game. And the Cowboys’ 27 runs were their most ever in a Big 12 game, surpassing the 23 they scored against Kansas State in a 1997 game.

Alek Manoah is making his case as the top college pitching prospect in the 2019 draft class — and he’s building quite a case for first-team All-America honors as well. A week after striking out 11 over eight innings of three-hit, shutout ball against that Oklahoma State offense that bashed 12 home runs today, Manoah shut down another scary offense this Friday. He turned in a complete-game four-hit shutout, racking up 15 strikeouts without issuing a walk to lead the Mountaineers to a 2-0 win against No. 15 Texas Tech.

Remember when stamina was an issue for Manoah? That was his bugaboo last year — he typically ran out of gas in the middle innings. It sure isn’t an issue anymore. He has some of the most electric stuff in the country — just check out these highlights below — and numbers to match: Manoah is now 5-2, 2.08 with 80 strikeouts and 15 walks in 60.2 innings this year.

? You don’t want to miss any of the highlights from tonight’s win, as Alek Manoah strikes out 1⃣5⃣ in a complete-game shutout of #11 Texas Tech. ??#HailWV pic.twitter.com/4qacBaAX6Y

Not only did Little Rock clinch a big Sun Belt series win with a doubleheader sweep of No. 25 Coastal Carolina on Friday — the Trojans did it emphatically. After scoring four runs in the first en route to an 8-5 win in the opener, Little Rock ran roughshod over the Chanticleers in the nightcap, a 14-0 blowout. Ramon Padilla’s two-run homer highlighted that four-run first in Game One, and Ryan Benavidez chipped in two hits and two RBIs in support of Chandler Fidel (7.1 IP, 9 H, 4 ER, 0 BB, 10 K). Benavidez had two more hits and four RBIs — highlighted by a three-run triple — as part of a 14-hit barrage in Game Two. Christian Reyes and Riley Pittman combined for six hits, four runs and five RBIs in that one, and Hayden Arnold (7 IP, 3 H, 0 R, 0 BB, 7 K) silenced the CCU offense.

Since scuffling to a 7-18 start to the season, Little Rock has caught fire, winning nine of its last 10 games and each of its last three series. Suddenly the Trojans are 9-5 in the Sun Belt, just a half-game out of first place in the West Division. And it’s fair to say Coastal is in a funk now, with nine losses in its last 14 games. The Chants will not be in the Top 25 anymore come Monday.

• In a marquee matchup between a pair of preseason All-Americans having fantastic seasons, John Doxakis (8 IP, 7 H, 0 R, 2 BB, 6 K) turned in a gem to out-duel Tanner Burns (6 IP, 5 H, 3 ER), leading No. 10 Texas A&M to a 4-0 win over No. 22 Auburn. Mikey Hoehner broke a scoreless tie with a two-run double in the fourth, and that proved all the support Doxakis would need. The A&M lefthander improved to 4-2, 1.76 with a dazzling 63-5 K-BB mark in 56.1 innings this year. Here’s A&M coach Rob Childress talking about another special Doxakis performance in a primetime duel.

• No. 7 Vanderbilt edged No. 12 Arkansas 3-2 in the series opener in Nashville. Drake Fellows (7 IP, 7 H, 1 ER, 2 BB, 9 K) came up huge for Vandy to best Hogs ace Isaiah Campbell (7.2 IP, 6 H, 3 ER, 0 BB, 9 K). Arkansas had a 1-0 lead early, but RBI doubles by Ethan Paul and Philip Clarke gave Vandy the lead for good in the fourth, and JJ Bleday added a key sacrifice fly in the sixth. Closer Tyler Brown entered in a tight spot in the eighth, with the bases loaded, one out and Vandy clinging to a 3-1 lead. But he escaped with the lead intact after getting a groundout and a strikeout to strand men at second and third.

• No. 1 UCLA trailed 5-2 after six innings but stormed back to beat No. 8 East Carolina 7-5. Michael Toglia came up with two huge swings of the bat late in this one, tying the game with a three-run homer in the sixth, then lifting the Bruins to victory with a two-run double in the eighth. Our Shotgun Spratling was on hand and will have plenty more on this one. A week after taking two of three on the road at No. 2 Stanford, UCLA is now just one win away from recording its third series win against a top-10 team this year.

• In the Big West series of the year, No. 23 UC Santa Barbara won its series opener against No. 18 UC Irvine 4-1. I wrote in this morning’s Weekend Spotlight that Irvine had an advantage in the rotation, but UCSB ace Ben Brecht (7.2 IP, 3 H, 1 ER, 2 BB, 8 K) managed to out-duel Irvine ace Andre Pallante (7 IP, 6 H, 2 ER, 1 BB, 8 K) in the opener, and Thomas Rowan homered twice and drove in three to lead the Gauchos’ offense. Our Eric Sorenson was in Santa Barbara and will have a full report.

• Alec Marsh threw a three-hit, complete-game gem to lead No. Arizona State to a 4-1 win over No. 4 Oregon State. Trevor Hauver drove in two to lead the offense for ASU, which needed to get back on track after losing four of its last five games. Our Kendall Rogers was on hand in Phoenix and will have more on this Pac-12 showdown. 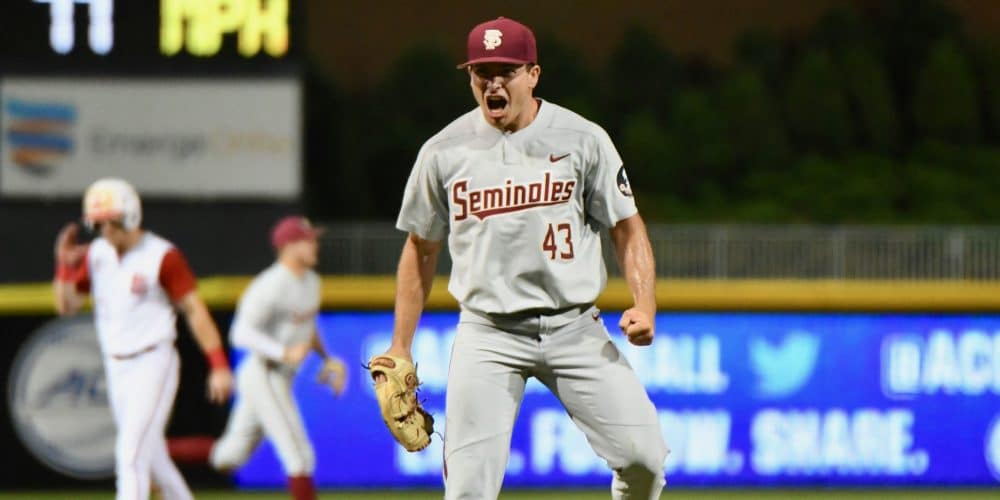 • First-team preseason All-America lefthander Drew Parrish returned to form just in the nick of time for Florida State, which earned a desperately needed 6-2 win against No. 16 Clemson. Parrish was masterful in this one, turning in eight innings of three-hit, shutout ball while striking out 12. He retired 18 straight batters during a stretch from the first inning to seventh, and he exited to a standing ovation after striking out the side in the eighth. This is what FSU expected to see from Parrish this year, but the first half was a major trial for the junior southpaw. If Friday’s start against a very dangerous offense signals that Parrish has figured it out, then Florida State is right back in the thick of the at-large race. Its RPI jumped seven spots to No. 90 after Friday’s win, which evened its ACC record at 8-8.

• No. 17 Georgia Tech was flying high after a series win over North Carolina last week, but the Yellow Jackets have stumbled this week, getting clobbered 12-2 by rival Georgia midweek, then getting drubbed 9-2 by Boston College on Friday. Jake Alu had two doubles and a triple, while Cody Morisette went 3-for-4 with four RBIs to lead the BC offense behind Dan Metzdorf (6.2 IP, 4 H, 2 ER, 2 BB, 6 K). The Eagles have played a tough ACC schedule so far and held their own — they’re now 7-9 in the league, and one win away from a huge series win. BC remains an intriguing darkhorse heading into the ACC’s stretch run.

• Oklahoma went on the road and knocked off No. 24 Baylor, 7-5. The Sooners took control with five runs in the third, highlighted by Brylie Ware’s three-run homer, helping Cade Cavalli (5.1 IP, 5 H, 3 ER) improve to 5-1, despite five walks. This was a big win for the Sooners, who had lost five of their last six conference games entering this tough road series. 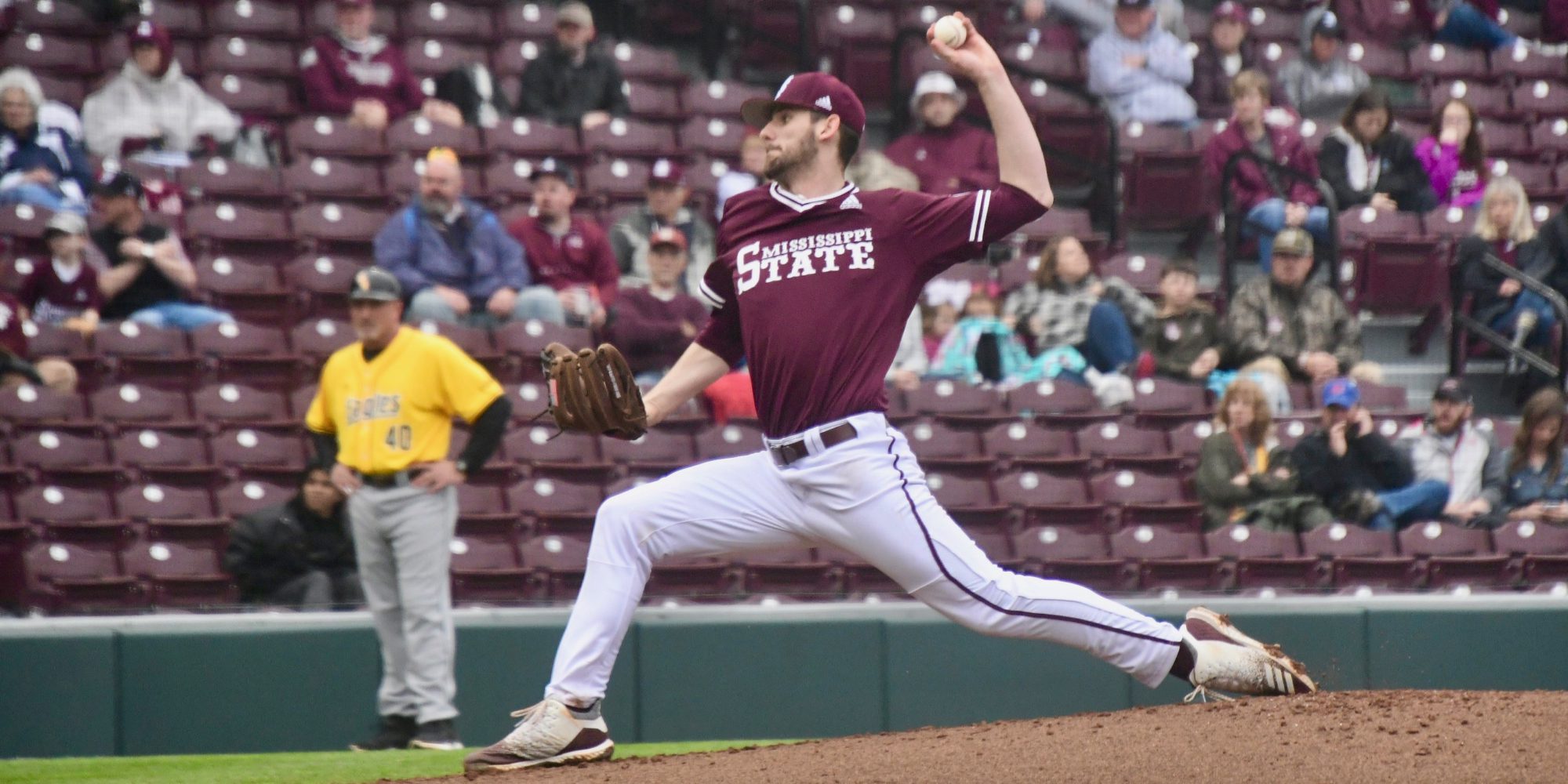 Ethan Small has been terrific this season for MSU (Aaron Fitt)

• Ethan Small was sensational in Mississippi State‘s 6-0 win over Alabama. Small struck out a career-high 15 over six shutout frames — the most strikeouts by any pitcher in an SEC game this year. The Crimson Tide had a chance to throw a haymaker at Small in the second inning, loading the bases with no outs — but the lefthander proceeded to strike out each of the next seven batters he faced.

“When he strikes out the side with the bases loaded, that’s when you realize, ‘This guy’s special.’ He’s been special all year, but he can reel it in when he wants to,” Misssissippi State coach Chris Lemonis told reporters afterward.

• LSU won a wild one at Missouri, 12-11 — but the victory came with a cost. Ace Zack Hess exited due to injury after just 13 pitches in the first inning, and center fielder Zach Watson also left with an injury after going 2-for-5 with three runs. This was a bizarre back-and-forth game, but LSU appeared to take control in the middle innings, going up 11-6 after four innings. But Mizzou battled back and tied it on a three-run homer in sixth, and then Todd Peterson settled things down with three innings of scoreless, hitless relief, striking out five. LSU pushed across a run in the 10th to win it.

• The longest winning streak in Division I belongs to Louisiana Tech, which ran that streak to nine games with a 5-3 win on the road at Conference USA leader Florida Atlantic (which entered the game with an 11-1 C-USA mark). Mason Mallard snapped a 1-1 tie with a three-run homer in the fifth to help Matt Miller (6.2 IP, 7 H, 2 ER, 1 BB, 9 K) improve to 5-0. The Bulldogs also got four hits out of Taylor Young and two RBIs from Tanner Huddleston. Red-hot Tech improved to 23-10 overall and 9-4 in C-USA.

• Keep an eye on California as well. The Golden Bears won their seventh straight game with a 10-7 victory at Arizona. The Bears erupted for six runs in the eighth, highlighted by Korey Lee’s three-run homer and Grant Holman’s two-run double.

• Stanford got six innings of three-hit, one-run ball from Brendan Beck in an 8-2 win against Washington. The Cardinal have turned in back-to-back strong performances after dropping that UCLA series last weekend, outscoring San Francisco 11-1 midweek and then putting the clamps on UW.