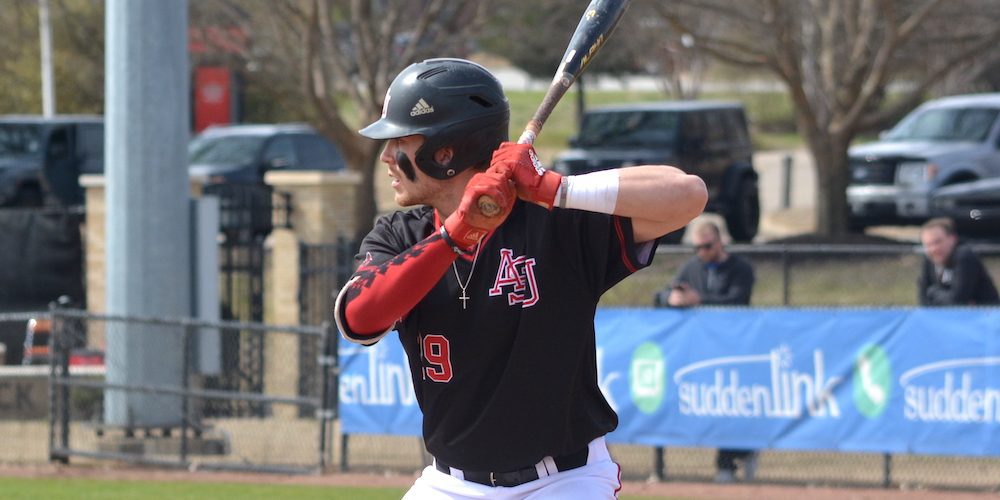 The Red Wolves have been one of the nation’s biggest surprises so far this season, but their biggest test was this weekend at Coastal Carolina. ASU won the series opener on Friday before Coastal responded by winning the first game of a doubleheader early Saturday. Well, the Red Wolves answered back in impressive fashion in the second game of the doubleheader, taking the series with a 7-3 triumph.

Arkansas State took control early in the contest, scoring three runs in the first on a Sky-Lar Culver two-run single and a sacrifice fly. They carried a two-run lead into the ninth before Culver, yet again, unloaded with a two-run double, while Justin Felix capped off the scoring with an RBI double of his own to make it a four-run advantage.

With the win, the Red Wolves have the best record in the Sun Belt at 7-2, along with a 19-9 overall record and an RPI of 53. The Wolves are trending the right direction and are up 11 spots in the RPI since last week.

LSU hadn’t played great in a while and dropped a series at Georgia last weekend. That caused some Tigers fans to wonder if their team might have some issues, but Paul Mainieri’s club answered that question in emphatic fashion Saturday afternoon with a dominant 11-2 win over Mississippi State to take that important SEC series.

The story of the game was the start by righthander Eric Walker. Walker, as you know by now, missed last season with an injury, and he’s finally returning to form. He was up to 88-89 mph with his fastball Saturday and struck out three, while allowing just four hits in seven shutout innings of work.

Meanwhile, the LSU offense took care of the rest. LSU got on the board with a first-inning home run from Antoine Duplantis and didn’t look back. Duplantis hit another home run in the eighth inning, while the Tigers pulled away from MSU with four runs in the seventh, another in the eighth and two more in the ninth.

Everyone in LSU’s lineup but one had hits in the game, with Duplantis tallying three, while Josh Smith had two and Giovanni DiGiacomo and Chris Reid each knocked in two runs. Meanwhile, MSU’s Sunday pitching woes continued as Peyton Plumlee was lifted after just two innings of work and Jack Eagan allowed two runs and a hit in 1.1 innings.

How about this for some dominance? LSU has now won 13 of its last 14 series against Mississippi State, while also winning its first road series in league play since 2017. Perfect timing, eh?

The team leader in home runs with seven on the season … you guessed it, @antoine_dupl! #GeauxTigers?

The Huskies were riding high after back-to-back series wins over Oregon and USC, but the Beavers halted that momentum as they’ve done so many times in the past, beating the Huskies 10-7 on Saturday to clinch a series win in Seattle.

OSU began the game in style with a five-run first inning with Tyler Malone smacking a double, Matthew Gretler hitting an RBI single and Ryan Ober capping off the inning with a three-run home run. UW actually tied the game at six in the fifth inning, but the Beavers finished strong, scoring four runs in the seventh to finish it off, with Adley Rutschman’s base-clearing double providing the knockout punch.

On the mound, OSU righthander Bryce Fehmel didn’t have his best start, but he did have quite the defensive play, which you’ll see below:

What? What? How did Bryce Fehmel do this?

Hey @SportsCenter, we've got an #SCTop10 play for you! #GoBeavs pic.twitter.com/ov3iExiCIS

The Cougars are making a strong pitch to be the WCC favorite after putting together an impressive weekend against Saint Mary’s. BYU, which has now won eight straight games, finished off a clean sweep of the Gaels with a 5-3 triumph in the series finale — this after scoring 21 runs the first two games against Eric Valenzuela’s club.

BYU’s Justin Sterner had a strong start against the Gaels, striking out six, walking one and allowing a run on six hits in six innings, while Reid McLaughlin was strong out of the bullpen with two shutout frames.

Offensively, Mitch McIntyre hit a home run and finished the afternoon with a pair of hits, while Noah Hill, Austin Deming and Brian Hsu each had two hits.

With the win, the Cougars, along with LMU, headline the WCC with records of 7-1 and 7-2, respectively. What a weekend in Provo.

The Hawkeyes made a statement earlier this season by taking a series from Oklahoma State on the road. Well, they’re in the headlines yet again today after clinching a series win at home over ranked Illinois with a 2-1 triumph.

Iowa starting pitcher Cam Baumann put together a strong start in the winning cause, striking out four, walking three and allowing a run on five hits in six innings while Trenton Wallace closed things out in style with four strikeouts and just one hit allowed in three innings.

Tanner Wetrich led the Hawkeyes offensively with two walks and two RBIs, while for the Illini, the bullpen was a plus with Nathan Lavender and Quinten Sefcik combining to toss four shutout frames to end the game.

Even with the series win over the Illini, the Hawkeyes are still just 2-3 in the league, while at the top, Michigan leads the way and Minnesota is red-hot with five straight triumphs.

Wetrich, Baumann, and Heller after Iowa’s 2-1 win Saturday against nationally ranked Illinois. The Hawkeyes go for the sweep Sunday at 1:05 in Iowa City. pic.twitter.com/LK8RCOdBib

Oklahoma State headed into this week with a chance to make a big statement and return to the D1Baseball Top 25. The Cowboys started off the week by beating No. 22 Oklahoma 6-5 in midweek action, then dropped Friday’s opener on the road at No. 19 TCU. But they bounced back to even the series with a 7-6 victory in a back-and-forth affair Saturday.

OSU got home runs from five different players, accounting for all seven of its runs. The final two long balls came in the ninth, as Colin Simpson’s solo shot tied the score, and Alix Garcia followed with a tie-breaking solo homer of his own. Carson McCusker started the dinger-fest with a two-run shot in the second, and OSU also got homers from Trevor Boone and Andre Navigato in support of starter Joe Lienhard (5.1 IP, 6 H, 3 ER), who was solid in a no-decision. At 17-8 overall and 4-1 in the Big 12, OSU will certainly vault back into the rankings if it can win Sunday’s rubber game. But nevermind the Top 25 — Oklahoma State could put itself in strong shape in the Big 12 standings if it can win this road series against a ranked foe.

After going 1-5 over the past two weekends against Mississippi State and Vanderbilt, Florida needed a big rebound week. After taking down rival Florida State on Tuesday, the Gators got back on track in SEC action this weekend, clinching a home series against Alabama. Florida’s pitching has been much better this weekend — albeit against a much less potent offense than the Gators faced last weekend in Nashville. Tommy Mace threw a three-hit shutout in Friday’s 3-1 win, and Christian Scott (4.2 IP, 1 H, 1 R, 0 ER, 1 BB, 5 K) was outstanding out of the bullpen Saturday, earning the win in relief of Tyler Dyson. The Gators also busted out of a little offensive funk in Saturday’s 12-3 victory, as Brady McConnell (3-for-3, 3 R, 3 RBI) homered twice to lead a 16-hit, five-homer attack for Florida.

There are only two things in life that are certain.

The Sun Devils never looked back, going on to an 8-3 win to clinch the series against the rival Wildcats. Arizona got back into the game with a three-run homer in the fourth from Dayton Dooney, but Arizona State got some clutch pitching and great defense in key spots to hold off further Arizona scoring threats. The Wildcats stranded the bases loaded in the ninth against Sam Romero. ASU is the only one-loss team in the country right now at 24-1, and it shows no signs of slowing down.

Here are a few other standout individual performances and notable team wins that caught my eye Saturday:

• Reid Johnston struck out seven in a six-hit shutout to lead No. 5 NC State to a series-leveling 3-0 win against Virginia, which got seven strong innings from Noah Murdock in defeat. I’ll be back in Raleigh for Sunday’s rubber game.

• Reid Morgan threw seven innings of five-hit, scoreless ball to lead South Carolina to a huge 4-0 win over No. 15 Auburn, evening the series. The Gamecocks improved to 2-6 in the SEC — they really need Sunday’s rubber game.

• No. 4 Georgia won its rubber game at Kentucky, 10-8 in 10 innings. The Wildcats stormed back from behind with four runs in the eighth on homers by Ryan Shinn and Jaren Shelby to tie it, but Georgia pushed across a pair of unearned runs in the 10th to survive.