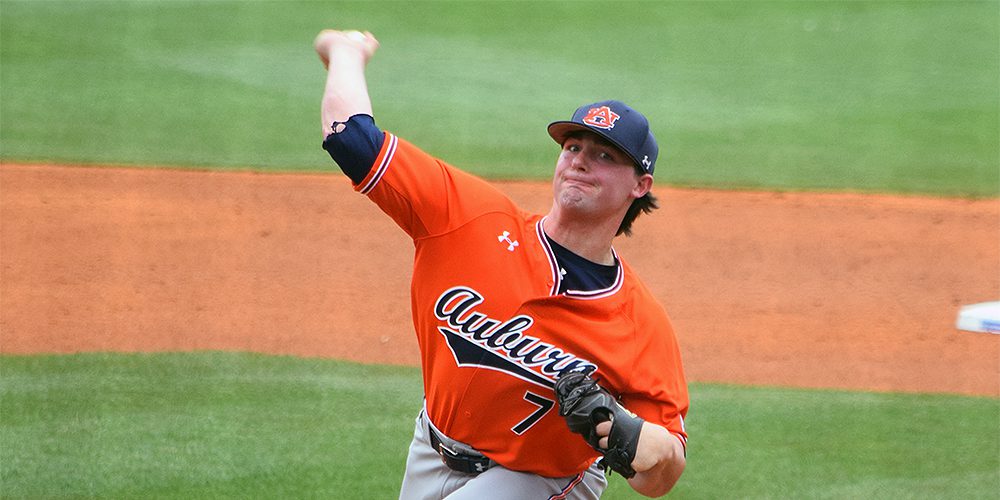 The Tigers lost a good one at the end of last season in All-American righthander Casey Mize, but they had plenty of hope on the mound with the return of another righty, Tanner Burns. Burns was sensational as a freshman last season and only has continued that success this season.

Burns was outstanding Friday night in a dominant 5-0 win over Cincinnati. He struck out 15, didn’t allow a single walk and allowed just two hits in a complete game shutout performance. He threw 104 pitches in the victory.

For the season, Burns is putting up video game numbers. He has an 0.92 ERA in 19.2 innings, along with 29 strikeouts and just three walks. Amazingly, teams are hitting Burns at just a .106 clip.

There was plenty of pressure on Burns entering this season, and there’s even more now. First it was losing Mize to the draft, now righthander and fellow starting pitcher Davis Daniel is down with an injury for a few more weeks. Yet, with the pitching load for this team on his shoulders, continues to dominate opponents.

The Aggies are still trying to find their way from an offensive standpoint, but there’s no doubt they have the arms to be dangerous this season. One of their two dominant lefthanded arms, John Doxakis, started against Baylor Friday night and didn’t disappoint.

Doxakis, who has been terrific so far this season, stymied the Bears, striking out 12, not walking anyone and allowing just one run on four hits in eight innings of a 5-2 win over BU.

While the lefty led the charge, the Aggies got some big hits early in the game. Braden Shewmake, who struggled offensively the first two weeks, finally got things going, hitting a two-run home run in the win, while leadoff hitter Bryce Blaum hit a solo home run.

As for Doxakis, for the season now, he has an 0.43 ERA in 21 innings, along with 32 strikeouts and just two walks. Teams are hitting Doxakis at a .113 clip as well. Doxakis did not duel with Baylor lefthander Cody Bradford. Instead, it was slider specialist Hayden Kettler, who allowed five runs in four innings of work.

Now comes the next chapter in the TCU-A&M rivalry Saturday night.

3. Alek Manoah-Kevin Abel Showdown That Was Not

It was supposed to be a Friday night showdown to remember. West Virginia’s Alek Manoah is one of the nation’s premier 2019 prospects, while Oregon State righthander Kevin Abel is one of the premier 2020 prospects.

Something had to give, though, and Manoah was on the losing end of things as OSU crushed the Mountaineers, 9-2.

Manoah sat 93-96 mph with his fastball the first two innings but was lifted after those two frames after allowing seven runs (four earned) on four hits, while also striking out and walking three batters each.

As for Abel, he was outstanding for a second-straight week, striking out 11, waking three and allowing a run and a hit in six innings. Dylan Pearce struck out five in two innings for the Beavers, while Andrew Walling closed it out. Teams are hitting Abel at a .143 clip through three starts.

Kyle McMahan headlined Oregon State’s offense, going 2-for-4 with two doubles and three RBIs and a walk, while Beau Philip went 2-for-4 with an RBI.

It wasn’t the showdown it was expected to be. Shocking, I know, but Kevin Abel again stole the show.

And Kevin Abel just struck out the side. He has 6 strikeouts through 3 and we still lead 7-0. pic.twitter.com/WfrwJtUj2X

Just a week ago, Andy Fisher put together a solid start and Illinois entered our rankings after having an outstanding weekend at FAU. Well, Fisher struggled Friday night as the Illini dropped a tough 11-3 decision on the road to Coastal Carolina.

Fisher allowed six runs and six hits in 4.1 innings, while Coastal Carolina starting pitcher Zach McCambley had a strong performance, striking out four, not walking anyone and allowing a run and three hits in five innings.

From an offensive standpoint, Kieton Rivers and Keaton Weisz each hit home runs in the win over the Illini, while Scott McKeon had a double and went 3-for-3 and Zach Biermann chipped in a two-hit performance. CCU leadoff hitter Cory Wood also had a loud night, smacking a double and also recording a walk.

It was a good night to be a Chants fan.

The swing that put us in the lead. Time to put more runs on the board.#ChantsUp #relentless pic.twitter.com/oV4D3L4NCV

With rain in the forecast for Saturday, the first two games between the Cardinal and Titans was moved up to Friday. The two teams traded blows in the series opener, as Stanford captured a 4-3 victory. But the nightcap of the doubleheader wasn’t so competitive as the Cardinal clinched the series win with an 8-1 triumph.

In the first game, hard-hitting Stanford slugger Brandon Wulff hit a game-changing big-time blast, while leadoff hitter Maverick Handley had a contest to remember, hitting a double and triple and knocking in a run. Brendan Beck put together a solid start for the Cardinal, striking out seven and allowing three runs on nine hits in 6.2 innings. Meanwhile, Tanner Bibee was strong for the most part for the Titans with nine strikeouts and just two walks in 7.2 innings.

Stanford put together a complete performance in the nightcap. Jacob Palisch struck out four, walked two and allowed a run and three hits in five innings, while the bullpen took care of business with Carson Rudd tossing three innings to close out the contest. Offensively, Christian Robinson and Will Matthiessen each hit a double, while Handley capped off a huge day with two hits and three RBIs and Alec Wilson had two hits and four RBIs.

Fullerton ended Stanford’s 2018 campaign in heartbreaking style (at least for the Cardinal). This series win doesn’t totally avenge that loss, but I’m sure this series leaves a sweet taste.

The Big Bad Wulff!@StanfordBSB's Brandon Wulff gets a howling reception after putting the Trees up 3-2 on his 7th inning solo bomb to CF. First lead of the night for the Smart Boys here at Goodwin Field. pic.twitter.com/hKQXnYYB69

Three Duke pitchers combined on the program’s first no-hitter since 1955, as the Blue Devils shellacked Penn State 14-0. First-team preseason All-American Graeme Stinson hasn’t had his best velocity so far this spring, working in the high-80s over the last two weeks instead of his usual 93-96, but he has continued to dominate nonetheless. He threw the first five innings Friday, allowing just two walks and striking out five. Stinson now has an 18-4 K-BB mark and has yet to give up a run through 12 innings over three starts, as the Blue Devils continue to build him up slowly. Lefty Matt Dockman followed with one inning, and talented freshman Jack Carey worked the final three while striking out five batters to finish off the no-no. Leadoff man Kennie Taylor led the Duke offense with two hits and four RBIs.

Louisville lefthander Reid Detmers and Michigan southpaw Tommy Henry have been two of the very best pitchers in college baseball through the first three weeks, and both of them twirled gems once again on Friday. Detmers allowed just one hit and one walk over eight shutout innings while striking out 14 in Louisville’s 5-0 win over James Madison. On the season, Detmers is now 2-0, 0.45 with 28 strikeouts and five walks in 20 innings.

Not to be outdone, Henry followed up last week’s 13-strikeout one-hitter with eight innings of three-hit, shutout ball in Michigan’s 2-1 win at Cal State Northridge. Henry struck out 12 and walked one, giving him this insane line on the season: 3-0, 0.00 with 34 strikeouts, two walks and 10 hits allowed in 23 innings. Phew.

Friday was quite a day for pitching enthusiasts. Detmers and Henry certainly weren’t the only high-profile lefties to dominate Friday, as TCU’s Nick Lodolo allowed just a run on two hits and a walk while striking out 13 in a 10-6 win over Houston at the Shriners College Classic. Our David Seifert was on hand in Houston and reported that Lodolo spotted his 93-94 mph fastball to both sides of the plate and mixed in two above-average breaking balls: an 86-88 slider and 80-81 curveball. That’s a very encouraging development after Lodolo struggled to miss bats with his breaking stuff in Week One in Arizona.

4. Vaughn tees off in Cal blowout

Reigning Golden Spikes Award winner Andrew Vaughn faced a nice test Friday in Saint Mary’s ace lefthander Ken Waldichuk, a preseason All-American. Well, Vaughn and the rest of the Bears aced that test, hanging eight runs on Waldichuk in 3.2 innings, en route to a 13-1 win. Vaughn started the onslaught with a two-run homer in the first, and he added a second two-run shot in the fifth after Waldichuk was out of the game. He finished the game 4-for-5. Vaughn, the best hitter in college baseball, is now hitting an even .500 on the year (15-for-30) with five homers, 13 RBIs, a .667 on-base percentage (thanks to 15 walks against just five strikeouts) and a 1.033 slugging percentage. I’ve run out of fresh ways to say that Andrew Vaughn is a bad, bad man.

The annual traveling rivalry series showdown between South Carolina and Clemson kicked off at Doug Kingsmore Stadium on Friday, and South Carolina put itself in the driver’s seat by winning on the road, 5-4. The Gamecocks did all their damage in a five-run second inning, as Andrew Eyster hit a two-run homer and TJ Hopkins added a three-run shot. The South Carolina bullpen turned in another strong performance after starter Carmen Mlodzinski exited in the third with an injury that coach Mark Kingston later said is believed to be a fractured foot. That’s obviously rotten news, because Mlodzinski has the best arm on the staff, but the terrific bullpen gives South Carolina plenty of reason for optimism going forward. Our Shotgun Spratling was on hand for this one and will have a full report Saturday morning.