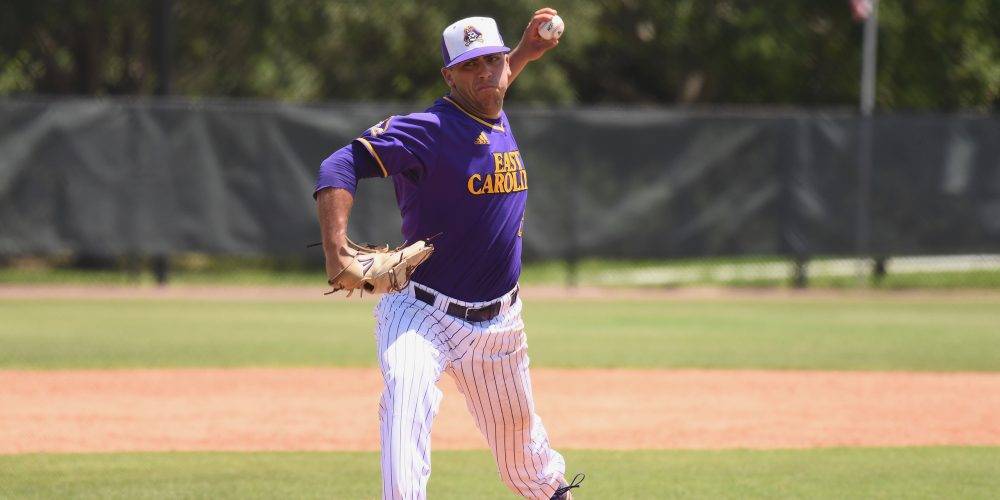 Lefthander Jake Kuchmaner came within one out of throwing East Carolina’s first no-hitter in 14 years. Kuchmaner allowed just two baserunners through eight innings Wednesday at Ole Miss, one via a hit by pitch and one on a strikeout/wild pitch. He struck out the first two batters of the ninth, then came within one strike of a no-no when he battled Michael FItzsimmons to a full count, but that at-bat ended in a walk. The next hitter, Thomas Dillard, singled to right field to break up the no-hit bid and end Kuchmaner’s day. He finished with nine strikeouts while shutting down one of the nation’s most talented lineups.

The Rebels made things interesting in the ninth, scoring two runs before stranding the bases loaded, as ECU escaped with a 3-2 win. The Pirates escaped their two-game swing through the Magnolia State with a 1-1 mark, having lost Tuesday night at Mississippi State. A split of those two marquee road games should pay nice RPI dividends for the Pirates going forward.

Coastal’s offense continued to roll Wednesday with a 14-8 win over Wake Forest, completing a two-game sweep of the Demon Deacons. Catcher Kyle Skeels led the onslaught, going 3-for-3 with a two-run double, a three-run homer and an RBI single. Kieton Rivers added two hits and four RBIs for the Chants, who have scored in double figures nine times during their 12-2 start.

Coastal will try to keep swinging those hot bats this weekend in Seattle, where it faces another nice test in San Diego, Washington and Oregon State. But the Chanticleers certainly look ready to handle that test; each of their last eight games have come against regionals-caliber opponents (Kent State, NC State, College of Charleston, UConn, Indiana, and two against Wake Forest). CCU is 6-2 in those contests.

For the second straight Wednesday, there were a few notable upsets around the country:

• Florida Gulf Coast knocked off No. 5 Florida 7-2 in Gainesville. FGCU’s Jay Hayes and Richie Garcia combined for five hits and four RBIs in support of Evan Lumbert (7 IP, 3 H, 2 ER, 1 BB, 6 K), who carried a perfect game into the seventh. After splitting the two-game midweek set against the Eagles, Florida is now 2-4 in midweek action. FGCU improved to 9-4 overall.

• Pennsylvania completed a surprising two-game midweek sweep of Duke with a 3-1 win in Durham. The Quakers broke a 1-1 tie with a pair of runs in the ninth on RBI singles from Craig Larsen and Tommy Courtney. Josh Sidney (6 IP, 5 H, 1 ER) turned in a strong start in a no-decision for Penn, which picked up its first two wins of the season against the Blue Devils (Penn is 2-3 overall, having opened the season this past weekend with a sweep at the hands of UNC Greensboro). Duke fell to 9-4 overall, but it could come to regret its 2-3 showing against Penn State and Penn over its last five games. 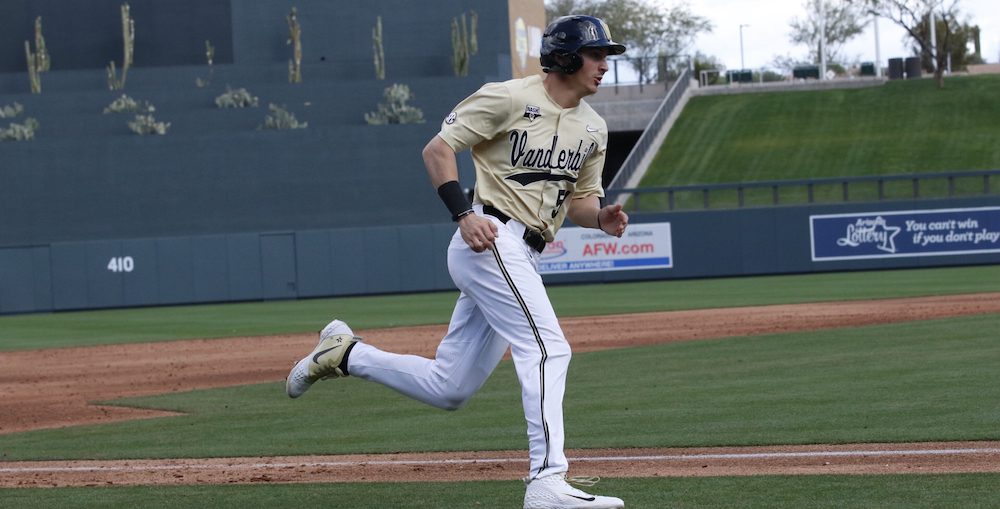 • Walker Grisanti had a career-high four hits and three RBIs out of the leadoff spot, and JJ Bleday went 3-for-5 with his fifth home run of the season in No. 1 Vanderbilt’s 12-4 win over East Tennessee State. Just 13 games into the season, Bleday has already set a new career high for homers (he hit four in 133 at-bats last year), and he extended his on-base streak to 41 straight games.

• Lucas Dunn and Drew Campbell had three hits apiece to lead No. 8 Louisville to a 10-9 slugfest victory over Morehead State.

• No. 14 Texas Tech erased a one-run deficit on Cameron Warren’s ninth-inning grand slam to beat San Diego State 12-9, completing a nice two-game midweek road sweep of the MWC preseason favorites. The Red Raiders trailed 5-0 after four innings but fought back thanks in part to a nice game from Dylan Neuse (2-for-2, 4 R, 3 RBI, 2B, HR).

• No. 22 NC State also came from behind to win a slugfest on the road, 11-10 over NC Central in 10 innings. The Eagles led 8-1 after five innings, but the Wolfpack scored two in the sixth, two in the seventh, three in the eighth and two in the ninth to take a 10-8 lead — only to see NCCU tie it with two runs in the ninth. But NC State won it on Patrick Bailey’s solo homer in the 10th. Will Wilson led the Wolfpack offense with four hits and four RBIs.

• High-profile freshman Patrick Wicklander threw five innings of one-hit, shutout ball to earn his first collegiate victory, as Arkansas beat Charlotte 9-2. Wicklander walked three and struck out eight, and five Arkansas relievers followed to finish off a combined three-hitter. Christian Franklin led the offense out of the nine hole, going 3-for-4 with a double, a triple and three RBIs.

• Another big-name freshman pitcher, Auburn’s Garrett Wade, turned in a very similar line to Wicklander’s, striking out eight and walking two over five innings of one-hit, shutout ball to lead Auburn to a 2-0 win over UT Martin. Carson Skipper worked 2.1 hitless frames to close it out.

• Elijah Cabell went 2-for-4 with a double and a homer, and fellow freshman Nander De Sedas deliered a walk-off RBI double in the ninth to lift No. 11 Florida State to a 4-3 win over North Florida.

• No. 13 LSU broke open a one-run game with four runs in the fifth en route to a 9-2 win over Holy Cross. Daniel Cabrera led the LSU offense with two hits and three RBIs.

• No. 20 Texas A&M scored five runs in the first and never looked back in a 9-3 win over Abilene Christian. Logan Foster had three hits to lead A&M’s balanced 12-hit attack. 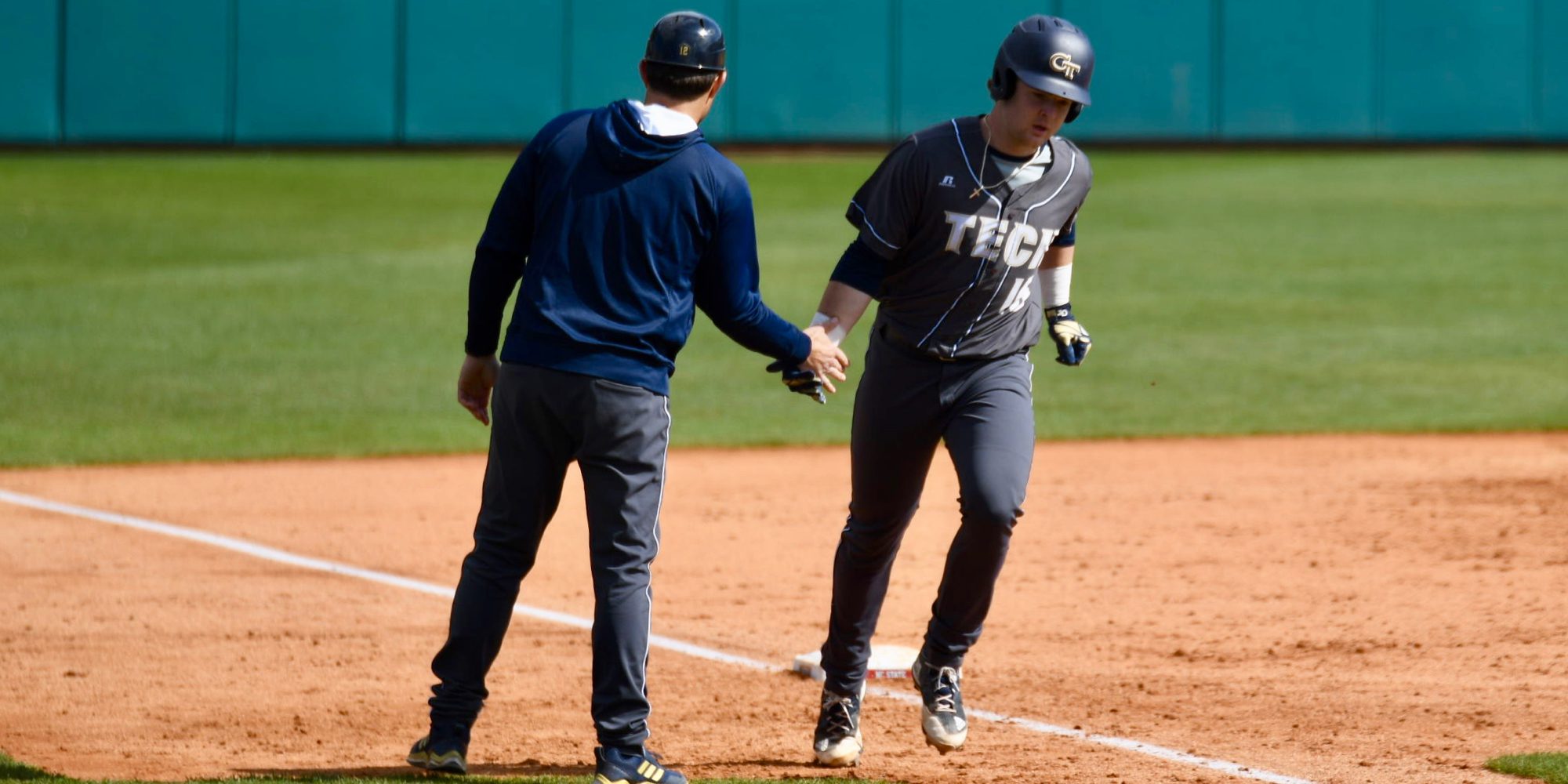 • Kyle McCann blasted two more homers in Georgia Tech’s 9-1 win over Kennesaw State. McCann is on fire; he now has six homers in the first six days of March, and nine long balls on the season — second-most in the country.

• Dallas Baptist broke a 2-2 tie with three runs in the sixth, highlighted by Evan Sandmann’s two-run triple, and went on to a 7-2 win against Oklahoma. The two teams split their two-game season series, as OU won 4-2 in Norman two weeks ago.

• Sam Houston State outslugged Rice 10-9 in Houston. The Bearkats trailed 9-5 after five innings but stormed back to win on Diego Davila’s bases-loaded walk in the ninth. Davila finished 2-for-4 with two RBIs out of the nine-hole, and leadoff man Jack Rogers went 3-for-6 with a homer, three runs and two RBIs to lead the Bearkat offense.

• Boston College is off to a sneaky 7-4 start after clobbering Kentucky 12-3 in Lexington. Sal Frelick went 3-for-5 with a homer, two runs and four RBIs to lead the BC offense.

• Alabama improved to 12-2 on the season by surviving a 14-inning marathon against South Dakota State. The Jackrabbits scored three times in the ninth to force extras, but the Crimson Tide got 5.1 combined scoreless innings of relief from Jeremy Randolph and Kyle Cameron, then won 5-4 on Tyler Genry’s walk-off single in the 14th.

• Two marquee matchups in Orange County were rained out: Michigan at UC Irvine and Arizona State at Cal State Fullerton. But the Sun Devils at least were able to notch one big victory over the Titans on Tuesday.