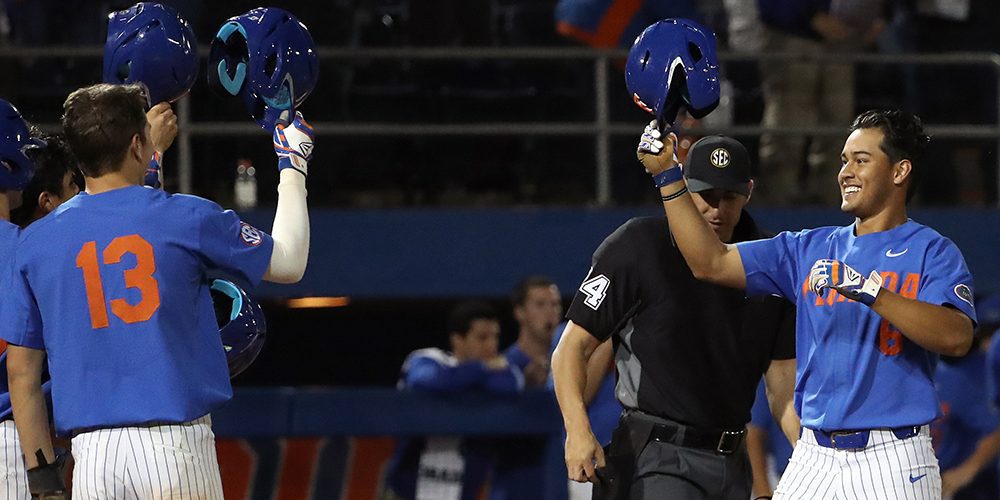 The Gators appeared to be in some trouble against rival Florida State through five innings. FSU’s J.C. Flowers smashed a grand slam and the Seminoles led the Gators 6-0. However, the Gators went wild in the fifth and sixth innings, scoring five runs in the fifth, eight in the sixth, and capping off the 20-7 victory in style with a seven-run eighth inning. The win over FSU was UF’s ninth-straight over its in-state rival, while it was the first time since 1980 the Gators scored 20 or more runs in a win over the Seminoles.

Nander De Sedas hit a home run early and looked smooth in the field for the most part, while Flowers obviously had that big hit in the middle innings. Otherwise, it was an ugly night for the Seminoles. Florida freshman slugger Kendrick Calilao continued his impressive hitting by smacking a grand slam and finishing the night with six RBIs, while Blake Reese hit a two-run home run and five Gators finished the night with two hits. The top four hitters in the UF lineup finished the evening 10-for-21 with nine RBIs. That’s a decent night, as FSU’s Mike Martin coached his final road game against the Gators.

How bout a grand slam for the freshman???

Calilao hits his second grand slam of the season, the #Gators fifth of the year.

While the night didn’t end in grand fashion for Martin, a cool moment did occur prior to first pitch as Florida coach Kevin O’Sullivan presented the legendary skipper with a new golf bag and tickets for a cruise on a Canadian river.

Congrats to @FSUBaseball head coach Mike Martin on a fantastic career. We hope you enjoy your retirement 11! #OneLastRide

Coach O'Sullivan presented him with a new golf bag and a Canadian river cruise! pic.twitter.com/Mgt2TITIRE

The Tigers are still trying to find the right formula, and that was evident Tuesday night in a tough 3-1 loss to a solid Northwestern State club. Northwestern senior righthander Cullen McDonald put together an impressive start, striking out five, walking three and allowing a run on five hits in 7.2 innings, while LSU spot started Landon Marceaux, who struck out three in three no-hit innings of work. Neither team did much from an offensive standpoint, with Jeffrey Elkins leading the way for Northwestern State with a double and two RBIs.

• This isn’t too much of an upset, but Dallas Baptist picked up an impressive 5-4 win over No. 19 Texas A&M. DBU used first pitchers in the victory, with relievers Kragen Kechely and Burl Carraway showing very well the final three frames. Kechely struck out three in two shutout innings, while Carraway showed a big-time fastball and a big breaking curveball in a scoreless ninth that included two strikeouts. Jackson Glenn led the DBU offensive cause with a pair of doubles, while three sluggers had home runs, with Christian Boulware hitting a two-run shot. DBU continues to knock on the door to the Top 25.

• Put this into the ‘not sure it’s a huge upset’ category as well as Duke beat No. 17 East Carolina, 7-2. Duke starting pitcher Cooper Stinson put together an interesting start, as he struggled with command, but also just allowed two runs in 4.2 innings, while the bullpen stepped up with Hunter Davis tossing two shutout frames and Kyle Salley striking out three in 1.1 shutout frames. The Blue Devils jumped all over ECU starting pitcher Gavin Williams for five runs in the first, as RJ Schreck led the way with a two-run double in the first. Our Aaron Fitt will have much more on the Devils later this week in our Weekend Spotlight.

Freshman RJ Schreck stealing the show so far today here at the Durham Bulls Athletic Park. Had that 2-run double to right-center earlier (good piece of hitting on a changeup, easy swing, barreled it up). And here he is with a diving catch to rob Brady Lloyd of a hit in the 4th. pic.twitter.com/GHVgNYKP1v

• No. 7 Louisville hosted No. 9 Ole Miss Tuesday afternoon and captured a narrow 4-3 victory, one that certainly will be good for the long-term postseason resume. U of L and Ole Miss were tied 3-3 in the bottom of the 10th when Zach Britton laced a walk-off RBI single into right field. Tyler Fitzgerald hit a home run and knocked in three runs, while leadoff hitter Jake Snider had a solid afternoon with a two-hit performance. Meanwhile, the top of the Ole Miss lineup had a day to forget with the top four hitters going a combined 0-for-17 at the plate.

• No. 3 Oregon State held off a ninth inning rally from rival Oregon to win its 10th-straight over the rivals to the south, 7-6. As you might suspect, much of the OSU bullpen came up in the clutch with Dylan Pearce tossing 1.1 shutout innings in the middle frames and Christian Chamberlain tossing 2.2 shutout innings as well. Beau Philip led the way for the OSU offense with a pair of hits and two RBIs. Unfortunately for the Ducks, the pitching staff performed exceptionally well, except for Kolby Somers, who allowed six runs and five hits in two innings.

• No. 12 Texas didn’t have catcher Michael McCann behind the plate on Tuesday in a 17-3 win over Texas Southern, but how about his replacement, freshman walk-on Caston Peter? Peter hit a two-run double and smacked a home run to help lead the UT offense.

• No. 20 NC State improved to an astounding 16-0 on the season with a 6-5 win over Charlotte. The Wolfpack were down early to the 49ers before scoring five runs the final two innings to grab the victory. Patrick Bailey led the offensive charge with a three-run home run home run, while Will Wilson, Evan Edwards and Terrell Tatum each had two hits.

#Bailey heading to the plate after tying this ballgame with a 4️⃣0️⃣2️⃣ feet blast ??? pic.twitter.com/Ncd5MAPHtE

• No. 14 Arkansas got some stellar midweek pitching in an 8-0 win over Western Illinois. Freshman righthander Patrick Wicklander was terrific, striking out eight, walking just one and allowing one hit in five innings, while four other Arkansas relievers also threw up some zeroes. Heston Kjerstad had a massive day at the plate, hitting a home run, double and knocking in four runs, while leadoff hitter Casey Martin went 2-for-4 with a double and an RBI.

• No. 18 Auburn got a strong start from freshman Garrett Wade in a 6-2 road win over South Alabama. Wade struck out eight and allowed a run and two hits in five innings, while Elliott Anderson was terrific to close out the contest, striking out six and allowing just three hits in two shutout innings. Also newsworthy, the Tigers have some good news on the way as it pertains to righthander Davis Daniel, barring a late setback.

Some good injury-related news for you guys for once: Hearing @AuburnBaseball RHP Davis Daniel should be able to get back on the mound and start his throwing program back up early next week. Obviously just a baby step for Daniel, but promising for #Auburn’s future. #mlbdraft

• No. 1 Vanderbilt continued its successful ways Tuesday night in an 11-6 win over Samford, snapping a lengthy winning streak for the Bulldogs. Ethan Paul knocked in there runs to lead the Commodores offense, while Cooper Davis, Phillip Clarke and Pat DeMarco each had two hits to lead the charge.

• How about this day for a pair of Houston Baptist sluggers? Chase Talbot and Anthony Jones each hit two home runs on a breezy day in Houston in a 21-5 win over Prairie View A&M.

• Alabama extended its winning streak to 11 games Tuesday night in a 2-0 win over Middle Tennessee. Tyler Ras tossed three shutout innings to start the game, while Dylan Smith and Davis Vainer each threw two shutout frames. Vainer punched out three Blue Raiders. Drew Williamson led the ‘Bama offense with a pair of RBIs, while Keith Holcombe went 2-for-2. I’m really intrigued to see what the Tide does to begin SEC play.

• UC Santa Barbara extended its winning streak to 10 games with a 2-1 win over Nevada. Rodney Boone was terrific on the mound, striking out eight, walking one and allowing four hits in 7.1 shutout innings, while Michael McGreevy earned his third save by striking out three in 1.2 innings of work.

• Louisiana Tech picked up a strong win that could have postseason implications down the road in a 7-0 triumph over Sam Houston State. Tech junior lefthander Kyle Griffen was terrific, striking out three and allowing eight hits in six shutout innings, while Braxton Smith struck out the side in the ninth inning. Offensively, Mason Robinson hit a triple, while Manny Garcia had a pair of doubles and finished the night with three hits.

• Penn State continues to be one of the pleasant surprises this season, improving to 10-3 with a 7-3 win over rival Pittsburgh on the road. Tyler Shingledecker was solid out of the bullpen with four strong innings, while Kyle Virbitsky struck out three in 2.2 shutout innings. Justin Williams had a huge day at the plate with a double, three hits and four RBIs, while Jacob Padilla and Kris Kremer finished the day with two hits each.