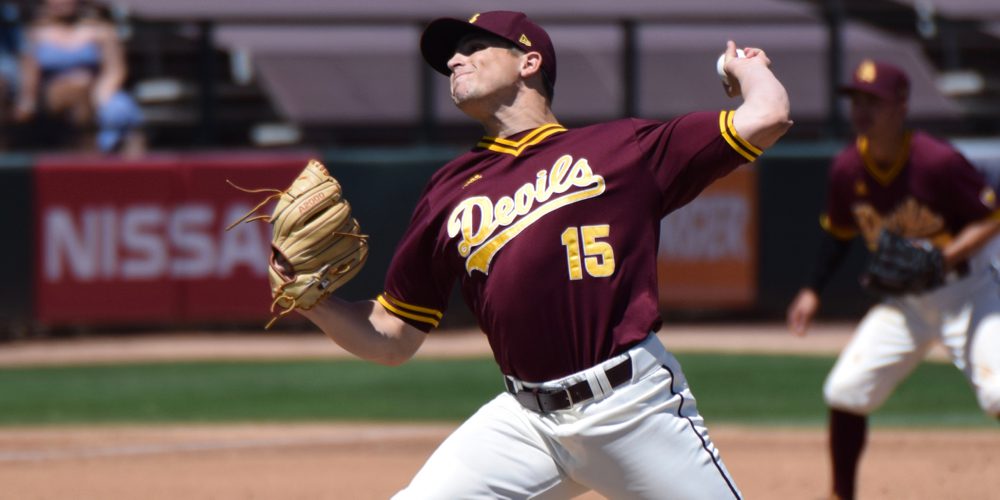 The Beavers looked almost unbeatably for about the past week, but they finally looked human Friday afternoon in a 6-1 setback to Ohio State. The Buckeyes began the weekend out in Arizona in ugly fashion against Utah on Thursday, but bounced back in style with junior righthander Yianni Pavlopoulos leading the way, striking out four and allowing just three hits in six innings. Seth Kinker threw well out of the bullpen (3 IP, 1 R), while six Bucks had two hits, including Brady Cherry, who hit a two-run homer in the fifth.

The Raiders made a big statement last weekend by going on the road and taking two of three from the Gamecocks’ rival, Clemson. Well, South Carolina doesn’t want to suffer the same fate and righthander Clarke Schmidt put together a solid performance in a 4-3 victory on Friday. Schmidt struck out 11, walked one and allowed three runs (all unearned) on four hits in 6.1 innings.

It’s well documented LSU has one of the nation’s premier one-two punches with Alex Lange and Jared Poche leading the charge. Lange was back to his old tricks on Friday in a dominant start and 6-1 win over Maryland. Lange struck out 12, walked two and allowed a run on six hits in six innings. Amazingly, Lange somehow recorded double-digit strikeouts while also throwing just 88 pitches, 59 for strikes … LSU carried a 3-1 lead over the Terps into the bottom of the eighth inning before catcher Mike Papierski blasted a three-run homer over the wall in left. Maryland, which entered the season with high hopes, dropped to 1-3.

One of the wilder games of the evening took place in Fort Worth, where the Sun Devils beat the No. 1 ranked Horned Frogs 13-9. How the game unraveled is what stands out the most. TCU carried a 1-0 lead over ASU into the fifth inning, but then the flood gates opened. ASU scored three runs in the fifth, one in the sixth, two in the seventh, three in the eighth and four in the ninth to win. Catcher Lyle Lin led the Sun Devils with three hits and two RBIs, while 6-foot-3, 235-pound outfielder Tyler Williams hit a home run and knocked in a pair of runs. While things got out of hand with the ASU bullpen late in the game, starting pitcher Eli Lingos had a good start, striking out eight and allowing two runs on two hits in six innings.

The Titans had a strong opening weekend with a home series win over Stanford, but their luck ran out for one night in a 6-1 setback to UNLV. UNLV righthander Alan Strong put together a quality performance, striking out six and allowing just four hits in 5.1 shutout innings. Meanwhile, Titans righty Connor Seabold allowed six runs (four earned) on 10 hits in six innings. UNLV received a strong performance at the plate from Bryson Stott, who went 3-for-5 with three RBIs.

UNLV wasn’t the only group of Rebels to beat a Top 25 team on Friday. No. 17 Ole Miss improved to 5-0 with a convincing 7-2 win against No. 24 UNC Wilmington in front of 10,041 fans at Swayze Field. Newcomers Thomas Dillard, Chase Cockrell and Grae Kessinger combined for seven of Ole Miss’ eight hits along with five runs and four RBIs. But most impressive was the way the Rebels subdued the explosive UNCW offense, as David Parkinson (6 IP, 2 H, 2 R, 1 ER, 1 BB, 6 K) and relievers Connor Green and Dallas Woolfolk combined on a three-hitter.

In the marquee series of the weekend, Florida won a 1-0 duel against Miami behind a brilliant performance from first-team preseason All-American Alex Faedo (8.2 IP, 2 H, 0 R, 1 BB, 8 K), who threw 119 pitches in a beastly performance. Jesse Lepore (6 IP, 6 H, 1 ER, 2 BB, 6 K) was outstanding in a losing effort for the Hurricanes, and Jonathan India’s RBI single in the third proved decisive thanks to Faedo’s brilliance.

Illinois-Chicago pulled off one of the most notable upsets in a day filled with several of them, taking down No. 7 Vanderbilt 5-3 in 10 innings. Starter Jake Dahlberg allowed just one run over five innings of work for UIC, and Vandy ace Kyle Wright bounced back from a lackluster season debut with six innings of one-run ball, fanning seven. The two teams exchanged two-spots in the eighth to force extras, and Brandon Gibis’ go-ahead RBI double highlighted UIC’s decisive two-run 10th. A week after Wright State won a road series at Clemson, UIC can put another huge feather in the Horizon League’s cap if it can take one more game in Nashville to win the series.

9. Extra-Inning Gems In The West

West Coast Conference favorite Gonzaga earned a quality road victory Friday at UCLA, 2-1 in 10 innings. Griffin Canning (7 IP, 2 H, 0 R, 3 BB, 12 K) was superb in a no-decision for the Bruins, but Gonzaga got a strong start from Eli Morgan (6 IP, 5 H, 1 ER, 2 BB, 7 K) and superb relief work from Sam Hellinger (3 IP, 0 R) and Wyatt Mills (1 IP, 0 R) to outlast UCLA. The Bulldogs tied it with a run in the ninth against Brian Gadsby to force extras, then won it in the 10th on Troy Johnson’s RBI single.

Elsewhere in the West, upstart UC Riverside prevailed in an 18-inning marathon against Fresno State, 4-3. Senior Alex Fagalde threw 6.1 shutout innings of relief to lead a cavalcade of six UCR relievers who combined to work 12 scoreless frames. Finally, Connor Cannon’s RBI single in the 18th gave UCR an unearned run in the 18th to win it. The Highlanders are 3-1 with other quality wins against Nebraska and UCLA.

Brady Puckett has parlayed his stellar summer in the Cape Cod League into an excellent start to the 2017 season. The 6-foot-9 Lipscomb righthander was simply dominant in a 2-0 win against struggling Bowling Green on Friday, allowing just one hit in a complete-game shutout. Puckett walked one and struck out seven, and he needed just 96 pitches to record his sixth career complete game. The lone hit he allowed was an infield single in the fourth inning. Puckett has frontline stuff that plays up even more because of his angle, and he held his 89-92 mph velocity deep into the game Friday.

• Virginia took care of Rutgers 7-3 with Adam Haseley and Robbie Coman leading the way. The pair each hit two homers in the win over the Scarlet Knights.

• Wake Forest brought out the bats in a dominant win over 15-5 to hand the Trojans their first loss this season. Gavin Sheets led the Demon Deacons offense with a ridiculous day, hitting three homers, a double and knocking in a whopping nine RBIs.

What slump? Gavin Sheets hits his THIRD blast of the night, tying the program record with NINE RBIs! pic.twitter.com/UOCqyGXw8Z

• Texas first baseman Kacy Clemens had yet another solid performance in a 4-1 home win over Connecticut. Clemens smacked a pair of homers and finished the night with three RBIs. Clemens is now hitting .444 with three homers and six RBIs … On a side note, keep an eye on UConn lefty Tim Cate, one of the nation’s elite pitchers. He left the game with an apparent injury in the fourth inning.

• Davidson first baseman Brian Fortier had a night to remember in an 8-5 win over UMass-Lowell. Fortier smacked a pair of homers, finished the night with three hits and knocked in six runs.

• Texas A&M junior righthander Brigham Hill is off to a roaring start this season and impressed in Friday’s 3-0 win over Pepperdine. Hill had an excellent mix of pitches with his fastball and changeup leading the way, and struck out 10, walked one and allowed just two hits in 7.2 shutout innings. Cason Sherrod, who is creating a lot of buzz these days, closed out the game with 1.1 shutout innings.

• Liberty picked up an 8-5 win over Maryland-Baltimore County and first baseman Sammy Taormina had a fruitful day at the plate, smacking a pair of homers and knocking in four runs.

• North Carolina improved to 5-0 with a win over Radford, as righthander J.B. Bukauskas once again was terrific. Bukauskas struck out 11, walked one and allowed three hits in seven shutout innings.

• Lipscomb junior righthander Brady Puckett earned plenty of acclaim for his showing last summer and put that big-time potential on display Friday night in a 2-0 win over Bowling Green. Puckett struck out seven and walked one in a one-hit complete game performance.

• Stetson righthander Brooks Wilson might’ve had the strangest night of anyone. Wilson had a career start, striking out 12, walking five and allowing two runs on no, yes, no, hits in eight innings. While Wilson threw well, the Stetson bullpen was unable to finish the job in a 4-3 home loss to High Point.

From time to time, as Aaron Fitt, Kendall Rogers and other D1Baseball staffers visit ballparks, we will do some video ballpark tours. In our first edition, Fitt takes us around sparkling Fowler Park on the University of San Diego campus.