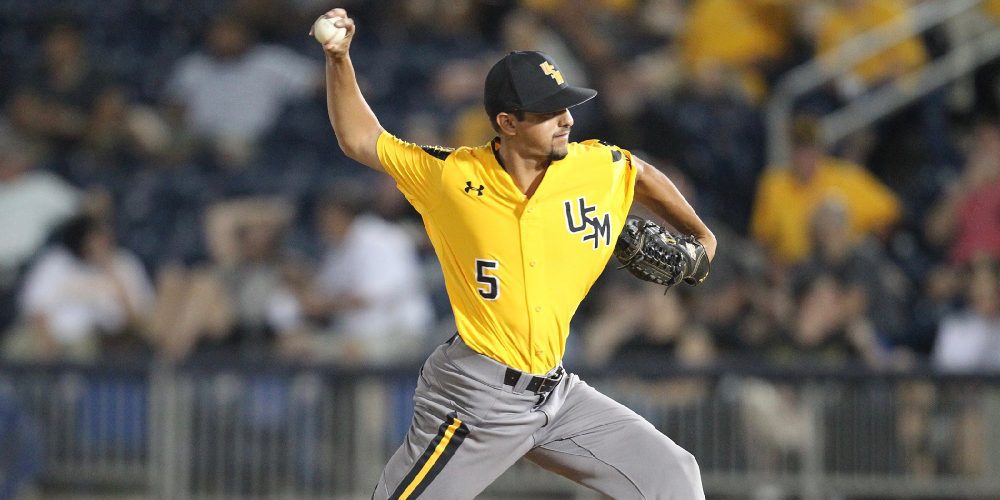 Nick Sandlin put together yet another strong start. (Southern Miss)

Team of the day: Georgia

Could this be the year the Bulldogs finally turn the corner? It certainly looks like it for now. Scott Stricklin’s Bulldogs improved to 7-1 in the SEC with a 3-0 series-clinching win over Texas A&M. Freshman Emerson Hancock started for the Bulldogs and struck out five, walked two and allowed no hits in three innings. Meanwhile, Tony Locey was electric out of the bullpen, getting into the mid-90s with his fastball, while also striking out four and allowing just one hit in 3.2 innings. Tucker Bradley, LJ Talley and Tucker Maxwell each had two hits to lead the offense. There’s no doubt the toughest part of Georgia’s league schedule remains, but what a start to SEC play. Georgia now has an RPI of eight and looks to end a lengthy postseason drought that began after the 2011 campaign.

But we still got one more tomorrow! #DawgsOnTop | #GoDawgs pic.twitter.com/SGjPNDQwDj

• Alabama starting pitcher Sam Finnerty struck out three and allowed just two runs (one earned) on eight hits in 5.2 innings in a 4-2 win over Kentucky. Deacon Medders also was impressive with three strikeouts in two shutout innings of relief work.

• Iowa stud outfielder Robert Neustrom went 3-for-4 with a home run, three RBIs and a walk in an 8-5 road win over Illinois. Though the Fighting Illini came up short in this one, slugger Bren Spillane hit his 12th home run.

• Mississippi State lefthander Ethan Small put together one of the better starts of his career, striking out nine, walking one and allowing a run on four hits in eight innings in a 4-1 win over LSU. Small threw 107 pitches against the Tigers — 75 for strikes.

• San Diego State will have a short stay in our Top 25 after dropping the first two games to New Mexico this weekend. UNM’s Jared Mang had two hits and two RBIs to lead the Lobos, while Nathan Garley was outstanding out of the pen, allowing a run and three hits in 6.1 innings.

Escobedo robs extra-bases with a diving catch in T6!#GoAztecs pic.twitter.com/NfatPLkl83

The Golden Eagles are having a season to remember thus far, and the talented righthander is the headliner. Sandlin put together yet another outstanding performance in a 12-1 win over Rice. Sandlin struck out 13, didn’t walk anyone and allowed no earned runs and just two hits in eight innings. He threw 96 pitches in the contest. How about these overall numbers? Sandlin has a 1.31 ERA in 48 innings, along with 73 strikeouts and just six walks. Insane.

• Florida State’s Jonathan Foster hit a walk-off two run home run in the bottom of the ninth inning to guide the Seminoles to an 8-7 win and the series win over Louisville. While it was another important series win for FSU, it was the third-straight series loss for the Cardinals, who appear to be heading the wrong direction. FSU’s Mike Salvatore had another big night, hitting a home run, tallying two hits and knocking in four runs.

Out to the wall … AND GONE!

• Ole Miss hard-throwing righthander Parker Caracci had some tense moments in the eighth inning, but he worked out of the jam and had an easy 1-2-3 ninth inning in a 5-4 win over Arkansas. Caracci tossed two shutout innings out of the pen to preserve the win. Ole Miss righty Brady Feigl put together a solid start, allowing just two runs in 5.1 innings, while the Evan Lee experiment didn’t work out well for Arkansas. Lee allowed three runs on four hits in just an inning of work.

• East Carolina escaped a bases-loaded jam in the 8th inning on the way to a 7-3 series tying win over Wichita State. ECU’s Chris Holba struck out six, walked two and allowed a run on five hits in six innings, while Brady Lloyd had a big night for the Pirates, smacking his first career home run, tallying two hits and knocking in three runs.

? WATCH: @BradyLloyd5 hits his 1st collegiate home run in the bottom of the 7th to put the Pirates up 5-2! #mulletandmustache ? pic.twitter.com/2SaGGF5Tw7

• Our Aaron Fitt has much more on this one, but Florida righthander Brady Singer tossed a gem in an 8-4 win over Vanderbilt. Singer struck out 11, walked one and allowed a run on two hits in seven innings. Meanwhile, Jonathan India hit yet another home run and finished the night with three hits and two RBIs. Meanwhile, All-American closer Michael Byrne set the program saves record with his 26th against the ‘Dores.

• In a battle between the teams with the nation’s two longest winning streaks, something had to give. Well, in the series opener, VCU used strong pitching and a four-run seventh inning to trip up Saint Louis in a 4-2 triumph. VCU starting pitcher Connor Gillispie struck out seven, walked one and allowed two runs on seven hits in five innings, while the bullpen was solid with Mac McCarty striking out three in three hitless innings. VCU has now won 14-straight games, with Michigan (10) and Tennessee Tech (10) right behind.

• Texas Tech dropped a surprising bout to West Virginia in the series opener on Thursday, but responded in impressive fashion Friday night with a 4-2 win over the Mountaineers. Righty Caleb Killian put together a strong start, striking out four, walking two and allowing a run on two hits in six innings. Ryan Shetter was terrific out of the bullpen, tallying four strikeouts and allowing just one hit in three shutout frames.

• San Francisco improved its WCC record to an impressive 9-0 with another win over San Diego — this time, 4-2. Riley Ornido continues to be sizzling hot on the mound, striking out 12, walking two and allowing a run on four hits in seven innings. Meanwhile, Riley Helland finished the night with a pair of hits and an RBI.

• Auburn righthander Casey Mize struck out seven, walked no one and allowed two runs on five hits in 7.1 innings in a 5-2 win over Missouri.

• Stanford was shocked in the series opener against Oregon on Thursday, but leave it to lefthander Kris Bubic to put the Cardinal back on track. Bubic struck out nine, walked two and allowed a run on four hits in 7.1 innings, while Jack Little closed out the contest with 1.2 scoreless innings out of the pen.

• New Orleans veteran lefthander Bryan Warzek was phenomenal in a 2-0 road win over Texas A&M-Corpus Christi. How about this? Warzek struck out 16 batters, walked one and allowed just four hits in eight shutout innings.

• Stetson righthander Logan Gilbert struck out nine, walked four and allowed just four hits in six shutout innings in a 2-0 win over Bethune-Cookman. Gilbert now has a 2.25 ERA in 48 innings, along with 69 strikeouts and 13 walks.

• Yale starting pitcher Scott Politz put together a strong start in a 7-1 home win over Brown. Politz struck out 11, walked one and allowed a run on six hits in a complete game performance.

• Elon righthander Kyle Brnovich had a start to remember in a dominant 9-3 win over previously red-hot College of Charleston. Brnovich struck out 14, walked three and allowed a run on two hits in 7.1 innings. Meanwhile, Josh Broughton had a huge day at the plate with a pair of homers and four RBIs.

• Northwestern lefthander Quinn Lavelle had a strong start in a 4-0 win over Maryland. Lavelle was on his game, striking out eight, walking just one and allowing four hits in a complete game shutout performance. Interestingly enough, the Terps, who entered the season with high hopes, are now 12-14 overall.

• Could Rutgers be one of the surprises in the Big Ten this season? The Scarlet Knights improved to 15-9 overall, 4-1 in the Big Ten with a road doubleheader sweep of Michigan State. Rutgers won the first game, 8-4, with Jawuan Harris knocking in three runs, while they won the second game 6-4 with starting pitcher Harry Rutkowski giving his team a quality start, striking out four, not walking anyone and allowing two runs on four hits in seven innings. RU still has an RPI of 103, but there’s no doubt this team is making big strides.

• In a bout between two of the nation’s better Northern teams, Minnesota bounced back Friday night to take a 9-8 win over St. John’s, taking the contest on a walk-off balk. Terrin Vavra and Ben Mezzenga had big nights at the plate for the Gophers with two hits and two RBIs. The series finale between these two should be a dandy.

• Oklahoma is on a roll on the weekends, improving to 5-0 in the Big 12 with a 5-4 win over Baylor to clinch that series win. Devon Perez had just an OK start for the Sooners, but the bullpen stepped up with Levi Prater allowing a run and no hits in three innings and Connor Berry tossing 2.2 shutout frames to end the contest.

• Kansas State apparently loves giving its fans a cascade of emotions. The Wildcats blew a seven-run lead against Texas in the top of the ninth inning. But with the game knotted at 10-10 entering the bottom half of the frame, the Wildcats got a walk-off RBI single from Cameron Thompson to capture an 11-10 victory and the series win.

HOLY CATS! Cam Thompson singles up the middle to give #KStateBSB the 11-10 walk-off winner vs Texas on Friday night ⚾️?? pic.twitter.com/lpWirqBNhE

• After putting together a solid start against NC State last weekend, Georgia Tech righthander Xzavion Curry was back at it again in a 6-1 win over Miami. Curry struck out 12, walked one and allowed a run on six hits in eight innings. Meanwhile, Tristin English led the Jackets offense with a home run, two hits and three RBIs.