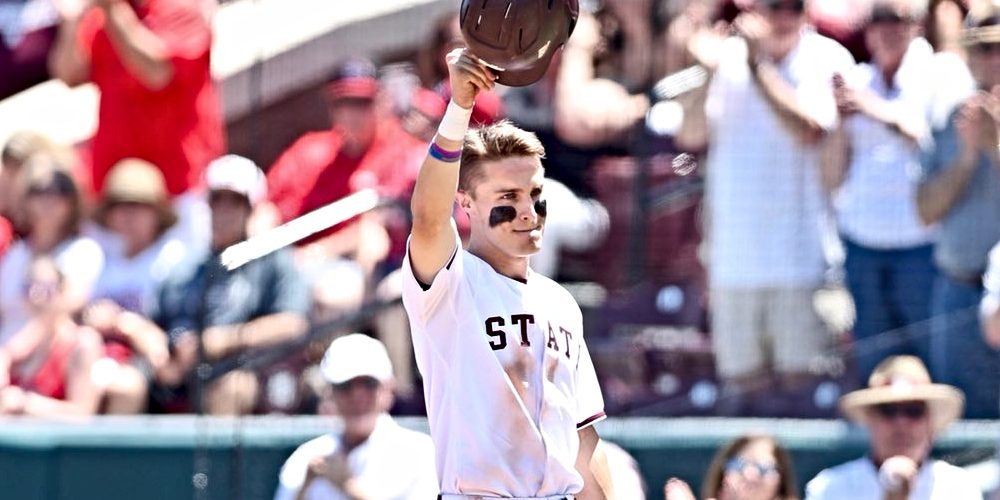 Player of the Day

How about the electric Bulldogs outfielder? Mangum entered the day looking to snag a series win over Georgia, while also trying to earn the SEC hits record. Well, Mangum tied the hits record with a rope early in the game before grabbing the hits record with a bloop single down the right-field line. Mangum added an infield single as a little icing on the cake. While Mangum’s big day led the way, Justin Foscue had a home run and three RBIs in a series-clinching 9-3 triumph.

The Hogs are having a weekend to remember against Tennessee. Arkansas scored 11 runs in the series opener against the Vols before having yet another offensive onslaught Saturday in a 15-3 triumph to clinch another SEC series victory. Heston Kjerstad smacked two home runs to lead the Hogs, while Jordan McFarland and Casey Martin each hit homers, too. Trevor Ezell had three hits in the win, while Christian Franklin went 4-for-4 with an RBI. While the Hogs bolstered their top eight seed chances, Tennessee’s SEC mark dropped to 9-11.

The Rebels entered the weekend on the outside looking in for a Top 16 seed and regional host, but their fortunes might have changed over the weekend with a series sweep over Texas A&M. The Rebels capped off the big weekend with a walk-off 3-2 win over the Aggies, with Thomas Dillard scoring the winning run on a wild pitch. Ole Miss now has an RPI up to 23 with a 13-8 league record. That’s probably good enough to get them into our Top 16 come Tuesday. We’ll see. At any rate, huge weekend for Mike Bianco’s club. For the second straight day, a freshman put together a strong start with Gunnar Hoglund allowing just two runs in six innings.

The Commodores put together an impressive home series sweep of Auburn this weekend, beating the Tigers 9-5 in the series finale. JJ Bleday hit yet another home run, while Pat DeMarco had four hits, Harrison Ray had three hits and Ty Duvall chipped in a two-hit, two RBI performance. Patrick Raby also had a nice night on the mound, striking out eight and allowing a run and five hits in 6.1 innings. Vandy sits all alone in first place in the SEC.

Tim Tadlock’s club bolstered their Top 16 resume on Saturday with a series-clinching, dominant 10-2 win over Oklahoma State. Josh Jung hit a home run, tallied three hits and knocked in two runs, while Cam Warren had two hits and three RBIs to help lead the charge. Furthermore, righthander Caleb Kilian allowed two runs in six innings, while out of the pen, Taylor Floyd showed off an electric slider in two shutout innings. Tech has outscored OSU 22-6 in the first two games of the series.

Deepest part of the park. Wind blowing in. Doesn't matter.

Both the Golden Bears and Oregon entered the weekend teetering on the bubble, and it’s Cal who’s the beneficiary this weekend. Cal clinched an important home series win over the Ducks with a 10-5 triumph on Saturday. Jared Horn struck out eight in eight innings while Grant Holman had three hits and two RBIs. Darren Baker and Cam Eden also knocked in two runs each. With the win, the Golden Bears are up to 37 in the RPI and in much better shape from a postseason standpoint.

As usual, the regular season title race in the Horizon League involves the Raiders and Illinois-Chicago. And the Raiders took the first two games of the series to clinch a series victory. Wright State won 11-3 on Saturday with Seth Gray hitting a home run and knocking in two runs and JD Orr collecting three hits and knocking in two runs. WSU and Milwaukee are tied atop the league standings at 13-7, while UIC is now 1 1/2 games back.

The Waves clinched an important home series win over Loyola Marymount, 5-0, with Lucas tossing an absolute gem in the victory. He struck out eight, walked one and allowed just five hits in eight shutout innings.

UT-Arlington had been rolling through the Sun Belt schedule but met its match Saturday night in Appalachian State lefthander Tyler Tuthill. Tuthill put together an outstanding start against the Mavericks, striking out eight and allowing just four hits in a complete game shutout, 6-0 win. App State swept the doubleheader and UTA’s RPI is down into the 70s.

Apparently it was a shutout kind of afternoon around the country as Dunlavey put together a big-time performance in a 3-0 win over Kansas. He struck out nine, walked one and allowed just two hits in the complete game performance.

The ‘Canes have been dealing with a rash of injuries with both Evan McKendry and Chris McMahon out this weekend. But others are stepping up, including righthander Brian Van Belle. Van Belle struck out eight, walked two and allowed just four hits in 8.1 shutout innings in a 1-0 series-clinching win over Virginia Tech. The U is now 12-10 and up to 12 in the RPI. In other words, they are most certainly in the mix for a Top 16 seed.

Remember when then Seminoles had an RPI in the 90s and were an absolute mess? Well, they’re no longer a mess, they’re red-hot. FSU improved to 12-8 in the ACC and its RPI is around 49 after beating Wake Forest 9-5 to clinch a third straight ACC series. Drew Mendoza had a big day at the plate with a home run, three hits and four RBIs, while Matheu Nelson had two hits and two RBIs.

The Pirates have a relentless offense and they’re making opposing pitchers pay in American action. ECU clinched yet another league series win with an 8-2 triumph over Tulane. ECU’s Jake Kuchmaner struck out six, walked two and allowed two runs and six hits in 8.1 innings, while Bryant Packard and Seth Caddell each tallied three hits. ECU is now 4 1/2 games in first place in the American ahead of Cincinnati and Tulane, while also being up to 3 in the RPI.

UK might be having a rough season in the SEC, but the talented lefthander continues to perform at a high level. Thompson led the charge as UK beat Florida 5-1 to even the series. The lefty struck out 11, walked four and allowed just one unearned run and three hits in a complete game performance.

The Longhorns dropped a heartbreaker Friday night to West Virginia, and the heartbreaks continued Saturday afternoon against the Mountaineers. UT took an 8-6 lead over the Mountaineers in the seventh inning, but WVU answered back with a run in the eighth and two more in the ninth to capture the road series win. While it’s a big series win for WVU, the series loss puts the Longhorns in huge trouble. Texas is now a half-game in last place in the Big 12 with a 5-11 league record with six games remaining. It also now has an RPI of 54. In other words, the Longhorns need to win out or win four or five remaining league games and do some serious damage in the conference tournament to make the NCAA tournament.

Well, the Longhorns aren’t the only Big 12 team scuffling right now. They could be TCU, which was blitzed by rival Baylor, 15-2, Saturday afternoon to lose a crucial conference home series. Frogs starting pitcher Charles King allowed eight runs in 2.1 innings, while for the Bears, Cole Haring and Shea Langeliers each smacked home runs. With the loss, the Frogs drop to 6-8 in the Big 12, but more importantly, they’re down to 90 in the RPI. TCU will need to win its final three series against West Virginia, Kansas and Texas Tech to have any chance at an at-large berth.

Monte Lee’s club has somehow put themselves on the postseason bubble with a rough stretch in the ACC over the past few weeks. Clemson lost its ninth-straight ACC game Saturday afternoon in a 13-8 loss to Georgia Tech. Mat Clark allowed five runs in 4.2 innings, while the bullpen scuffled. With the loss, the Tigers are now 11-12 in the league with an RPI dipping to 43. Clemson is probably OK for the next week, but they desperately need to get back on track.

The Owls and Bulldogs are now playing catchup with first place Southern Mississippi after the first two days this weekend. FAU dropped its second straight game to Old Dominion on Saturday, while Louisiana Tech tried to stage a late rally against Rice, but the bid was thwarted by Rice via a game-ending triple play. With the setbacks, FAU is now two games out of first and Tech is four games back. More importantly, FAU is down to 61 in the RPI and Tech is down to 49. It’s hard to see either team getting into the field if the season ended today.

Could the Sun Devils actually miss the NCAA tournament? It’s certainly a possibility, though my money is still on the Devils making the field. Washington’s Nick Kahle hit a walk-off sacrifice fly Saturday afternoon to beat the Devils, 10-9 in 12 innings, and to take an important Pac 12 series. Joe Wainhouse hit a home run for the Huskies, while for ASU, Boyd Vander Kooi allowed six runs and nine hits in 6.2 innings. ASU’s league record is still solid at 12-8, but its RPI is down to 46.

• After Illinois State took the series opener from Dallas Baptist, the Patriots responded Saturday afternoon with a 13-3 win over the Redbirds. Evan Sandmann had a huge day at the plate with a home run, three hits and three RBIs, while Jackson Glenn and Blayne Jones each knocked in three runs.

• No. 23 Indiana was down to its final out Saturday afternoon against Minnesota and on the verge of losing an important home Big Ten series. However, two-way talent Matt Lloyd wasn’t going to let a loss happen, as he smacked a walk-off three-run home run to beat the Gophers, 7-6. It sets up a huge series finale on Sunday, one that IU needs to keep hosting hopes alive.

• Illinois took the series opener from Nebraska, but the Huskers responded Saturday with a 4-3 win, as Joe Acker smacked a walk-off single to win it. Both teams are in good shape from an RPI standpoint, but the Fighting Illini could use a win on Sunday to bolster that league record, which sits at 7-7 (.500).

• Connecticut dropped the series opener to Sam Houston State on Friday but responded in impressive fashion Saturday afternoon with a 9-4 win, as Christian Fedko knocked in a pair of runs. The UConn bullpen also did a nice job with CJ Dandeneau and Caleb Wurster each tossed two shutout innings. It sets up a fun finale on Sunday.

The Shadid Brothers are the only Bradley siblings to homer in the same game and now they have done it in the same inning with Luke’s 2-run shot and Andy’s 3-run ?. @NCAACWS @d1baseball @aaronfitt @KendallRogers https://t.co/Fizhr2YdQ5