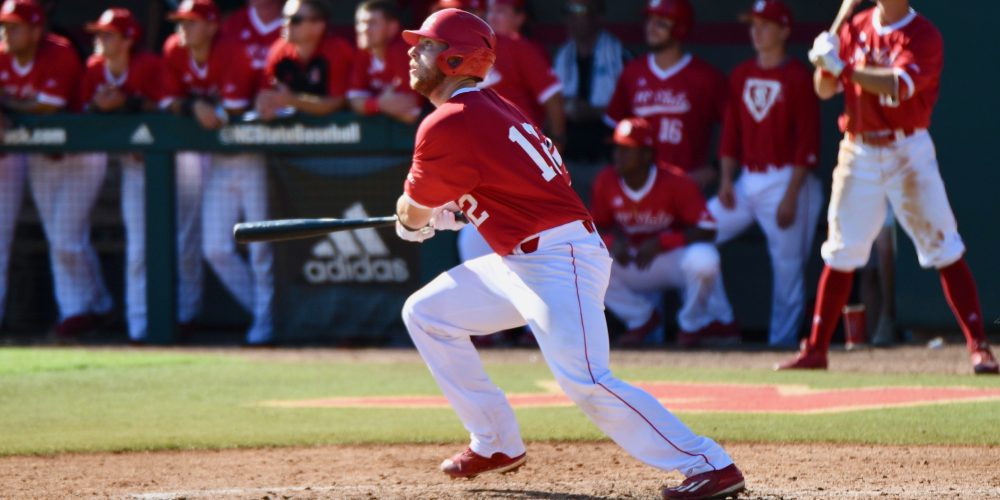 Here are 10 things that caught our eye in Saturday’s college baseball action:

For the second straight season, Iowa has won a series against Oklahoma State. Last year, the Hawkeyes scored 27 runs in the final two games of a series in Iowa City after dropping the opener. This time around, Iowa went to Stillwater and rode its pitching to a pair of tight one-run victories after losing the opener.

In the nightcap of Friday’s doubleheader, relievers Duncan Davitt and Grant Leonard worked four combined innings of two-hit, shutout ball to lead Iowa to a 5-4 win. In Saturday’s rubber game, Grant Judkins (5 IP, 3 H, 0 R, 5 BB, 6 K) turned in a solid start, and six Iowa relievers held OSU to just one hit over the final four innings, as the Hawkeyes won 3-2. Iowa came from behind to tie the game on Mitchell Boe’s RBI double in the eighth, then won it on Austin Martin’s sacrifice fly in the ninth. At 6-4 with a four-game split at Hawaii and a series win at OSU on the ledger, Iowa looks like a legitimate dark horse in the Big Ten as conference play approaches.

This weekend’s series between Gonzaga and Southern Miss pitted our preseason picks to win the WCC and C-USA against each other, but both teams were scuffling heading into the weekend, riding three-game losing streaks. Gonzaga bounced back nicely from losing the final three games at Cal State Northridge last weekend, sweeping Saturday’s twin bill 4-2 and 10-8 to clinch the series with one game remaining. No. 8 hole hitter Mason Marenco went 4-for-4 to lead Gonzaga’s 11-hit attack in support of ace Casey Legumina (7 IP, 3 H, 2 ER, 2 BB, 7 K) in the opener. The nightcap was a back-and-forth affair that went to extra innings tied 6-6, but Gonzaga surged ahead with four runs in the 10th, then held off USM’s comeback bid in the bottom of the frame. Center fielder Guthrie Morrison went 4-for-5 with three runs to lead Gonzaga’s offense in that one.

NC State was team No. 26 in our Top 25 deliberations last week, and the Wolfpack seems like a strong bet to break into the rankings this week after waxing Campbell 10-1 midweek and then sweeping a doubleheader from Minnesota on Saturday, 3-2 and 8-4. The Wolfpack is now sitting pretty at 10-0, with other quality wins against Kent State and Coastal Carolina on its resumé.

On Saturday, Jason Parker (5.1 IP, 4 H, 1 ER, 1 BB, 4 K) turned in a strong start in the opener, and Dalton Feeney worked 2.1 scoreless innings for his second save. RBI doubles by Brad Debo and JT Jarrett highlighted NC State’s three-run fourth, which proved all the support NCSU’s arms would need. In Game Two, the Wolfpack jumped out to an early lead with a six-run first inning against hard-throwing righty Sam Thoresen, highlighted by big hits from two freshmen: Tyler McDonough’s two-run single and Vojtech Mensik’s grand slam. The ’Pack got another strong start in that one from sophomore lefty Canaan Silver (6 IP, 3 H, 2 ER), who notched his first victory.

Nothing better than hitting a GRAND SLAM for your first career home run ???? pic.twitter.com/oHwkFXWXJe

Coastal Carolina has bounced back emphatically from back-to-back losses to NC State and College of Charleston. The Chants blew out No. 25 Illinois 11-3 on Friday, then beat another borderline Top 25 team on Saturday, taking down Connecticut 10-7. Coastal scored in each of the first six innings Saturday, highlighted by a four-run fourth that featured two-run singles from Kyle Skeels and Jared Johnson. Kieton Rivers added two hits and three RBIs for CCU, which got 4.2 innings of brilliant one-hit, shutout relief from Matt Eardensohn, who fanned seven.

Coastal gets a chance to add one more quality win on Sunday when it faces Indiana — which also beat UConn on Saturday, 9-6. The Huskies made a big splash opening weekend with a series win over Louisville, but since then they have dropped a series at College of Charleston and started 0-2 at the CCU tournament. Their Sunday game against Illinois feels like a big one.

5. Upset of the Day: Milwaukee over Arizona

Milwaukee might be a real player in the Horizon League this year. The Panthers knocked off Arizona 10-4 on Saturday to even up the three-game series in Tucson, improving them to 6-2 on the season. The Wildcats actually led this game 4-2 before Milwaukee erupted for seven runs in the fifth, highlighted by Tyler Bordner’s two-run double and Devin Rybacki’s two-run single. Relievers Alex McIntosh and Patrick Tomfohrde combined to work five scoreless innings of relief to nail down the victory.

The Crimson Tide didn’t have a great 2018 campaign, but they showed some improvements. Those improvements weren’t quite good enough for head coach Brad Bohannon and his staff, they want to make marked progress on the national stage.

Well, Bohannon’s Tide made a statement this weekend by sweeping South Alabama on the road — winning both ends of a doubleheader Saturday by scores of 10-5 and 6-1 in the series finale.

Alabama finished off the series in impressive fashion, thanks to strong start by veteran hurler Brock Love. Love struck out 11, walked one and allowed just one hit in 4.2 shutout innings. The Tide bullpen also performed admirably with Jeremy Randolph finished out the game with two shutout innings along with four strikeouts.

With the road series sweep, the Tide is now 10-2 with a marquee road series win. The progress in Tuscaloosa is evident.

Though many eyeballs on Saturday were on the nightcap between TCU and Texas A&M, the Bobcats, too, are making a statement this weekend. Ty Harrington’s club crushed Rice in the Shriners College Classic opener before getting past Houston, 9-4, Saturday afternoon.

Texas State fell into a 2-0 hole early in the game but surged offensively with six runs in the third and fourth innings combined. Dalton Shuffield, Jaylen Hubbard and Will Hollis each hit triples for the Bobcats, while Cole Coffey and Skyler Valentine each recorded a double.

With the win, the sneaky Bobcats are now 2-0 in the Shriners tournament and are 7-3 overall with three-straight successful weekends.

Here’s a tip of the cap to Harrington and Co.

3. Will Tennessee ever lose?

It’s safe to say the Volunteers won’t forget the way this season has begun for a long time. The Vols have only continued their successful ways this weekend, beating North Florida 10-2 in the first of two games today, while also beating Western Kentucky in the nightcap, 6-3.

Against the Ospreys, hard-throwing righthander Zach Linginfelter put together yet another strong start, striking out eight, walking one and allowing two runs and four hits in seven innings, while Luc Lipcius hit a home run, Jay Charleston had three hits and three RBIs and Justin Ammons had two hits and two RBIs.

Against the Hilltoppers, smallish righty Will Neely put together yet another strong starting performance, striking out six, walking one and allowing three runs on five hits in six innings. Offensively, six different Vols sluggers finished the night with a hit.

The Vols are now 12-0 overall, which matches the best start in program history, set back in 2014. And how about this nugget? UT has a pitching staff ERA of 0.85.

Coach Vitello recaps another successful weekend for the Vols after a 3-0 showing at the Cox Diamond Invitational in Pensacola, Fla. #GBO pic.twitter.com/GeCQ0ONvNJ

It’s not often that someone outshines Navy righthander Noah Song, but it happened Saturday afternoon in Massachusett’s 3-0 win over Navy.

Song certainly had a solid day on the mound, too. The outstanding righthander struck out 10, walked two and allowed just three hits in seven shutout innings. That’s outstanding.

But Lasko was even better.

The 6-foot-4, 210-pound, senior righthander was dominant against the Midshipmen, striking out eight, not walking anyone and allowing just five hits in a complete game performance.

For the season, Lasko now has an 0.61 ERA in 14.2 innings, along with 19 strikeouts and three walks. Teams are hitting him at a .145 clip. Earlier in the day in a win over Central Connecticut, UMass’s Sean Harney struck out 10, walked one and allowed five hits in six shutout innings.

Speaking of Song, be sure to checkout how his future includes being a helicopter pilot for the Navy.

The Nittany Lions entered the weekend undefeated. And while they dropped the series opener to Duke in ugly fashion, they responded well Saturday afternoon with an 8-7 triumph against the Blue Devils.

Offensively, Parker Hendershot began the scoring in the first inning with an RBI single, while Kris Kremer hit three homers. Kremer, by the way, had a huge afternoon at the plate, going 4-for-4 with six RBIs, while Jordan Bowersox, along with Hendershot, finished the day with two hits.

Sitting at 7-1, the Lions will look to earn a massive series win over the Blue Devils on Sunday. It appears progress is being made by the boys from State College.